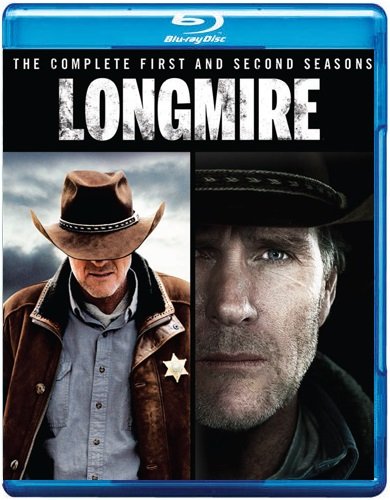 Have to admit, I do watch a lot of A&E TV, thanks you “Duck Dynasty” but I am not super familiar with this show, “Longmire”. This crime drama premiered in June 2012 on A&E and is based on the “Walt Longmire” series of mystery novels written by best-selling author Craig Johnson. In fact the release of The Complete First and Second Seasons coincides perfectly with the third season, which premiered on June 2, 2014. The show has that Western feel for me, set in Wyoming. The show reminded me of the recent HBO series “True Detective”, it is slow to reveal but still entertaining. If you dig this show, saddle up since this Blu-ray debut will definitely rope you in.

Official Premise: Long shadows of secrets and murder hang over Absaroka County, Wyoming, jurisdiction of the tough and brooding Sheriff Walt Longmire (Robert Taylor) who’s been struggling since his wife¹s death a year ago. At the urging of his attorney daughter, Cady (Cassidy Freeman), Walt knows he must turn his life around. Aided by a new female deputy, Vic (Katee Sackhoff) and his oldest friend, Henry Standing Bear (Lou Diamond Phillips), he becomes re-energized about his job and runs for re-election ­ even though his ambitious younger deputy Branch (Bailey Chase) is a rival candidate. The unraveling truth about Walt¹s wife’s death will astonish the stoic lawman and his daughter.

Besides the main cast, the first two seasons have had a nice variety of guest stars as well including Louis Herthum (“The Last Exorcism”), Katherine LaNasa (“The Campaign”), Charles S. Dutton (“Roc”), Gerald McRaney (“Major Dad”), Michael Mosley (“Last Resort”), Lee Tergesen (“Oz”) and Peter Weller (“Robocop”). Since all this solving of murder cases take place under the big skies of Wyoming, I have to admit that the 1080p high definition transfer are quite impressive with their original aspect ratio of 1.78:1. Also Warner Archive delivered their best audio track yet with this DTS HD-Master Audio 5.1.

Also in a rare move for Warner Archive, they have a decent set of special features included. “The Camera’s Eye: Realizing the World of Longmire” talks about the shooting locations for the setting of the show. “Longmire Justice: Exploring the Cowboy Detective” takes us into the lead character. There are extended episodes for “Sound and Fury” and “Election Day” both with Intros by Executive Producers. Lastly, there is a featurette, “Testing Courage: The Storm Defines The Man”. Pretty impressive Warner Archive for sure. If they would have had some commentary track it would have been perfect.