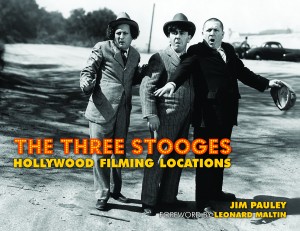 When I think about The Three Stooges, I think about the classic days of Hollywood.  I think about real sets and classic film production.  If you are a fan of The Three Stooges, like myself and have the same questions, then “Hollywood Filming Locations” is for you. It exploring the original locations that were the sites of the Stooges’ most famous Columbia Pictures short films made in and around Hollywood between 1934 and 1958.  The book is really well done and beautifully delivered, thanks to Santa Monica Press.

The details of the book are jam-packed with numerous archival photographs, some of which are rare and never-been-seen before or published. They also range from some really neat candid shots to classically vintage publicity stills.  Then there are simple screen captures from films and other contemporary photographs.  This isn’t just photos of The Stooges though, there is a focus on the location themselves within aerial views and maps detailing this locations. This book isn’t just photos though, there are quotes throughout from the Three Stooges’ directors, supporting actors, and family members.

Jim Pauley is definitely the author for this book.  He is a noted expert on the Three Stooges filming locations.  He has written articles on this subject since 2001 published in “Three Stooges Journal”, which is released by the Three Stooges Fan Club. He really gets a chance to show his love for this trio of comedic legends.  There is also a very sharp foreword from film critic Leonard Maltin. If you are a Stooges fan , then this book is a must have to show Hollywood’s cinematic history and the legacy of these comedic geniuses.