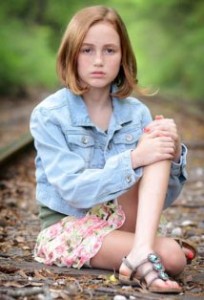 Madison Lintz is known best for her role of Sophia in “The Walking Dead”.  Her character was turned into a zombie in the end of the second season in one of the most epic episodes to date.  Media Mikes had a chance to reflect with Madison on her role and the fans reaction to the show.

Mike Gencarelli: Tell us about what was your reaction when you found out you were being turned to zombie in season two of “The Walking Dead”?
Madison Lintz: It was a mixed reaction. As an actor, your job is to serve the story and I knew this outcome for Sophia would be the best way to do that. On the other hand, as Madison, I was sad to leave my Walking Dead family. I’ll always cherish them as my first tv family and no other experience has lived up to it yet.

MG: How long did the make-up process take for that episode?
ML: It was about a 2 hour process each time we had to do it.

MG: How long did that scene take to shoot?
ML: It took one full entire day. They shot everything they could without me, before bringing me onto the set, and even then they brought me out and hid me from the cast so that their reactions could be even more genuine when they did see Sophia come out of the barn.

MG: What would you say was the highlight of playing Sophia?
ML: I would say the highlight was being a part of one of the best shows on television at this moment. That doesn’t happen every day, if ever, and I was very fortunate. I think I’m a bit spoiled now! It was also an incredible learning experience and made me see how fun a career in acting could be. The people were amazing and working with such talented actors was priceless. It’s only helped me to further my career so I’m grateful to Frank Darabont and Gale Anne Hurd always for giving me this opportunity. I owe them dinner for sure!

MG: How can you reflect on the fans reactions to your character?
ML: It’s been very touching. No matter where I go, I have people coming up to me saying that they were crying on their couch as they watched. Or screaming, “Nooooooooooo!” Grown men tell me that this was the one scene that actually “broke them”. It’s pretty satisfying. And encouraging. To know that you were believable enough in the role to affect people’s mood for days or even weeks is so crazy!

MG: Besides your own, who is your favorite character on the show?
ML: I’m sure it’s no secret that it was Norman Reedus! I just love him and he was so nice to me. So if you are his current girlfriend, he’s lying to you. I’m his favorite! No, I’m kidding. I especially enjoyed working with him, Steven, and Melissa McBride. But everyone was super.

MG: What do you have planned upcoming?
ML: This past month, I had a movie called “After” that was in theatres. It’s a psychological thriller. On Christmas Day, you can see me in “Parental Guidance”, a family film starring Billy Crystal and Bette Midler and one of my good friends, Bailee Madison. I shot a pilot for ABC which did not end up getting picked up so back to the drawing board! Story of an actresses life, right?