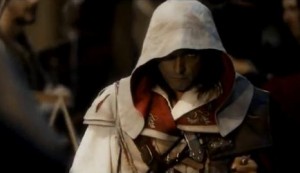 If you are fan of the video game series “Assassin’s Creed”, you shouldn’t even be reading this review. This is a must purchase for any fan of the series. If you are not familiar with the series than this is a good starting point especially since it is a prequel to “Assassin’s Creed II” and “Assassin’s Creed Brotherhood”. This film is complied of three short films made by Ubisoft, so you know it is loyal to the series and it is not just fan films. The production value is very well done and the prequel story is a great setup for the game.

The story centers on Giovanni Auditore, the father of the game’s main character, Ezio Auditore. Giovanni is an Assassin get involved with a government conspiracy that is being plotted to overthrow the powerful Medici family and destroy a unified Italy. Giovanni finds that the plot is deeper that expected and could even go as far at the Vatican. I was totally digging this film and I only wish (as I am sure everyone does) it was longer. This could have been a really kick ass feature. I guess we will have to see what Sony does with their hopefully-upcoming big budget live action adaption. But for now, this is what we have and it certainly kicks some ass.

Now I am sure you are asking if this is really worth purchasing just for the 36 minute film, well the answer is no…it is also jammed packed with extras. The extras are really the main draw for this Blu-ray for sure. “The Making of Assassin’s Creed Lineage” delves into the production of these short films and how they were created with focus on visuals. There is a eight minute motion-comic called “Assassin’s Creed: Ascendance”, which was really cool and also comes with an making of it as well. There also is a sneak preview for the upcoming “Assassin’s Creed: Revelations” game.

Next up there are two separate sections for “Assassin’s Creed” game bonus features. There are three “Developer Diaries” featurettes focusing on Artistic Direction, Freedom and Story. There are various trailers like the TV Launch, E3, Templar and Ubidays trailer. The “Assassin’s Creed II” game bonus features contains six “Developer Diaries”. The first is called “Ezio: A New Assassin”, “Power to the People”, “All Roads Lead To”, “All’s Fair in Love and War”, “Clothes Make the Man” and “Home Sweet Home”. There are two focus features on “Assassination Arsenal” and Factions”. There also is an interview called “Renaissance” featuring Margaret Meserve, Historian from Notre Dame. Lastly there are many trailer from the Teaser/Launch, E3 and Gamestop trailers.