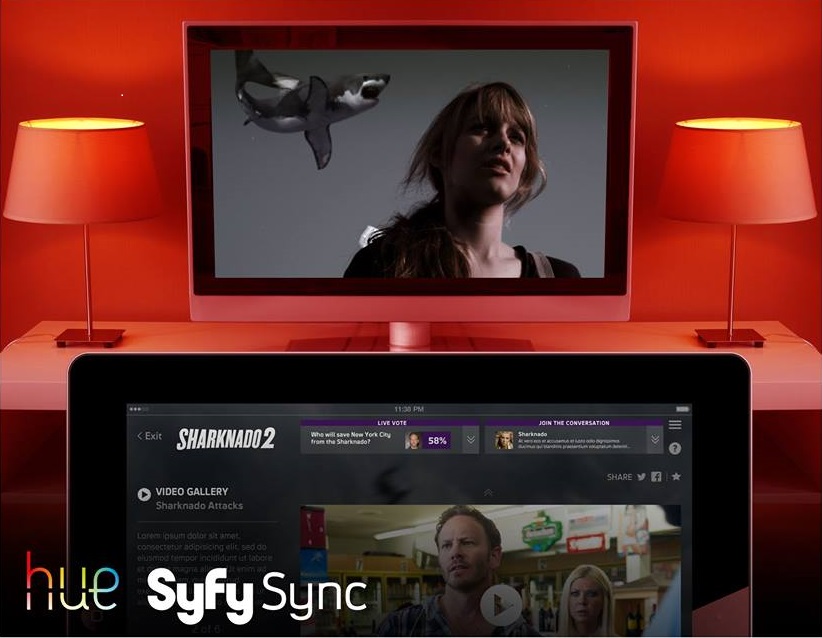 NEW YORK – July 24 2014 – Just in time for the world premiere of Sharknado 2: The Second One, Syfy and Philips, the global leader in lighting, today announced the first ever television content-focused immersive lighting experience with the pairing of the Syfy Sync second screen app and the Philips Hue connected lighting system for the home.

Fans who pair the Syfy Sync app for iPhone and iPad and Philips Hue bulbs while watching Sharknado and Sharknado 2 on Wednesday, July 30 (at 7PM and 9PM EST, respectively) will be treated to a specially designed “light track” – a visual soundtrack – that adds a heightened layer to the movie-watching experience in addition to the existing content and social experience Syfy Sync provides. However, fans of Syfy and Hue can get warmed up starting today as the app works immediately with the original Sharknado, available on a variety of platforms.

When combined, the app will detect audio cues from the Sharknado movies and translate them to the Web-enabled Hue system. Fans will of then be enveloped in the onscreen action through ambient lighting effects as the bulbs change colors to reflect the increasingly stormy weather conditions, chainsaw-induced shark carnage and more throughout the two movies.

In making the announcement, Matthew Chiavelli, Vice President, Digital Media & Strategy, said: “With a fan base that’s always looking for new ways to interact with our content, we’re happy to give them an innovative way take it to the next level. Syfy Sync has always been a multiplatform play, and now the action makes the leap from the television and second screen to an even more immersive Sharknado viewing experience with Philips Hue.”

“We continue to look at new and innovative ways that we can create unique lighting experiences for the home and working with Syfy, we can give Sharknado viewers a whole new way to experience television,” said Arif Quraishi, Vice President of Marketing, Sales and Strategy at Philips. “Unlike other lighting offerings that are limited to proprietary systems, we can work through third-party apps like Syfy Sync, and allow the lighting to react to Sharknado content, taking a further bite out of the audience’s imagination. Together we are making television history.”

About Royal Philips:
Royal Philips (NYSE: PHG, AEX: PHIA) is a diversified health and well-being company, focused on improving people’s lives through meaningful innovation in the areas of Healthcare, Consumer Lifestyle and Lighting. Headquartered in the Netherlands, Philips posted 2013 sales of EUR 23.3 billion and employs approximately 113,000 employees with sales and services in more than 100 countries. The company is a leader in cardiac care, acute care and home healthcare, energy efficient lighting solutions and new lighting applications, as well as male shaving and grooming and oral healthcare. News from Philips is located at www.philips.com/newscenter.

About Syfy:
Syfy is a media destination for imagination-based entertainment. With year round acclaimed original series, events, blockbuster movies, classic science fiction and fantasy programming, a dynamic Web site (www.Syfy.com), and a portfolio of adjacent business (Syfy Ventures), Syfy is a passport to limitless possibilities. Originally launched in 1992 as SCI FI Channel, and currently in 96 million homes, Syfy is a network of NBCUniversal, one of the world’s leading media and entertainment companies. NBCUniversal is a subsidiary of Comcast Corporation. (Syfy. Imagine Greater.)