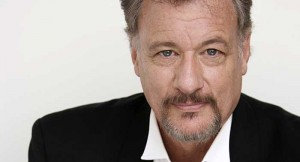 John de Lancie is known for his role of Q in “Star Trek: The Next Generation”. Recently John was introduced to the world of “My Little Pony: Friendship Is Magic” voicing character Discord. Since then he teamed up with Michael Brockhof in order to make “Bronies: The Extremely Unexpected Adult Fans of My Little Pony” to showcase this unbelievable fan base behind this show. Media Mikes had a chance to chat with John to look back on “Star Trek: The Next Generation” and also his work with “My Little Pony”.

Mike Gencarelli: Looking back on “Star Trek: The Next Generation”, what was your favorite part of playing such a great character like “Q”?
John de Lancie: I guess mostly the reaction. Everybody liked him a lot. It has been a long time but he wasn’t iconic when I started but he was iconic when I left. The reaction was more intense than the actual doing of it.

MG: Are you surprised that it is still so well-received and respected all these years later?
JDL: Yes it is phenomenal. “Star Trek” is a phenomenon. I don’t know of any other shows that keeps on giving like this one has over the years. A lot of people feel that I sort of came on full blown and that other characters slowly developed over the years. Maybe that is the case to the extend that I was used to playing characters that were like that. You didn’t have a very long time to establish who you were, so you had to come on strong.

MG: Do you have any experiences that stand-out from working on the show?
JDL: I don’t have one favorite moment…I have many favorite moments. But what was fun about this show was that you knew that you were on the set making cultural history or if nothing else TV history. It was a show that was really culturally important. People referred to it and it became a way to talk about anything futuristic – it would be “Star Trek-like”. So it was great.

MG: “Q” was always one of my favorites. He was bad but also threw you for a loop occasionally.
JDL: Well that is what I intended. He is very naughty and somewhat dangerous. You were left never quite knowing what would happen. But it was a lot of fun. He is the one person you would invite to the dinner party but really make sure that the guests can handle him [laughs].

MG: You are hitting the convention scene this year, what do you enjoy most about meeting fans?
JDL: I love meeting fans. I find myself talking to kids, who see me at the age of their fathers…if not older. Some of them are even third generation fans. Which is actually is pretty amazing and honestly really unheard of.
MG: I am a second generation, my father got me into it and now I have a daughter that is 9-months old and she already has a “Star Trek” jumper.
JDL: That is what I am talking about and it is really amazing.

MG: On the complete other side of the spectrum, tell us about voicing Discord on “My Little Pony: Friendship Is Magic”?
JDL: It started with me being asked to do a voice over for “My Little Pony: Friendship Is Magic” and I said sure. So I read the script and have never heard of it before. But I thought it was well-written and fun. I have done characters like this before but I didn’t know that they wanted a Q-like character. I didn’t think of it as that at first and I just did it as it was written. Then about three months later, I was on the computer and I thought I got spammed. I had about 300-400 emails and they all had the subject of “My Little Pony”. So, I reach a bunch of them and then asked my wife what she knew about “My Little Pony”. She reminded me I did a voice for it about three months ago, which I totally forgot about. She told me it was a cartoon for little girls. But let me tell you these emails were not from little girls [laughs]. So that was the beginning of it.

MG: How did you get involved with “Bronies: The Extremely Unexpected Adult Fans of My Little Pony”?
JDL: It just so happened that Michael Brockhoff came over my house the night I got those emails and I told him about the story. He laughed and I agreed I didn’t get it either. Why would 20 year old guys be interested in “My Little Pony”? He asked me if I would want to do a documentary about it and I say “Oh my God, no way”. So that weekend, I had to go up to Vancouver on a job and some kids came up to me and asked me to sign pictures of Discord. I say kids, I mean 20 year olds. They are the typical geeky fans that I recognize from “Star Trek”. So, I asked them all a lot of questions and still I didn’t quite get it. But as they explained me to more and more what the show was about, it started to click. The show has the elements of harmony, being kind, generous, loyal and tolerant. I thought what is the problem with that? So now I had a face to put to what a Brony was. Mike sent me a link the following week for a Fox News, whom I am not a fan of, piece of this trend. It trashed the idea of Bronies calling them “a bunch of homosexuals, living at home on food stamps and disability watching cartoons in their parents at day in their parents basement”. That made me upset because it is not true. This is typical of Fox News. Have we really gotten to the place in our society that we are so threatened by everyone, that if we have 20 year old guys watching cartoons intended for girls, which is about being kind, loyal, generous and tolerant that we are going to demonize them and turn them into something that they are not. So that is when I called Mike back and said “I’m on board with the documentary, let’s do it”.

MG: Tell us about how you ended up with the Kickstarter campaign?
JDL: I asked Mike how was he going to fund this projects and he said through Kickstarter. I asked him how much he needed and he said about $60,000. He asked me if I could get myself into one of the conventions for BronyCon and I said “Yes”. The deal was that we were going to shoot for two days with two cameras, edit for about six weeks and that would be it. So yeah, instead of $60K, we got $322K. At that point, I was blown away. We’ve shown this film to people in the business and they just go “Wow, you’ve put a lot into this” and that was out intent. So when you see this film, I think you will be impressed.