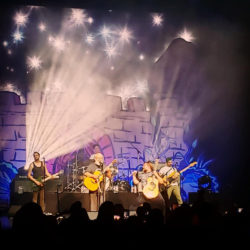 The self-named greatest band in the world, Tenacious D, stopped by Kansas City on a hot Summer night to promote their fourth studio album, “Post Apocalypto.” Their newest album isn’t filled with a lot of bangers, so the duo of Jack Black and Kyle Gass stacked their setlist with more recognizable songs, predominantly leaning on their first two albums to fill their setlist. The crowd, certainly inebriated to some extent, ate up every minute of it.

Before the iconic comedy duo hit the stage, Wynchester, featuring Tenacious D’s electric guitarist, took the stage to perform some comedic country music and a handful of covers. The acoustic act was a fitting opener as they played some decent toe tapping music and joked with the crowd, although a good portion of fans weren’t even in their seats yet, as they waited in a never-ending merchandise line or loaded up on beverages before the main event.

Once the sun set, and Black and Gass hit the stage, the real show was on. Much like other comedic acts, Weird Al and Psychostick, Tenacious D is very serious about their silliness and their act. For those who don’t know, their shtick is that they’re a couple of guys who believe they’re the greatest musicians to walk the Earth, even though they’re a couple of pot heads equipped with acoustic guitars and a severe case of writers block. They crank that persona to 11 on stage, doing a handful of sketches before specific songs and sometimes improvising with one another. For those who’ve probably never heard of the band, or know of them, I’m not sure you would enjoy attend their show because you’d certainly be out of the loop and wondering why everyone in the crowd knows every word to their sexually explicit and juvenile songs.

Because any fans of The D would be content with a front to back cover of their first album, the concert felt a bit short because they only played six tracks off of their self-titled album. However, when I checked my phone before the encore, the duo, accompanied by a very talented backing band, had more than filled the requisite amount of time required, clocking in at nearly an hour and a half. By the time they were prepared to saunter off the stage, fans were already on their feet applauding and chanting, hungry for more, but happy with the massive helping of pot rock that they got. Fans who have yet to see the comedy rockers, like myself, will certainly leave satisfied. Those who’ve seen them before certainly won’t feel disappointed and will most certainly catch them on their next tour.