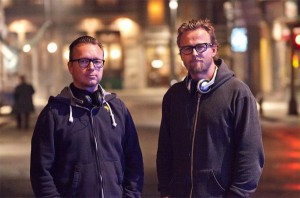 In 1951 the film “Kon-Tiki,” a film detailing the voyage of famed Norwegian explorer Thor Heyerdahl, won the Academy Award as the year’s best documentary feature.

Six decades later a pair of Norwegian filmmakers decided to tell the story of Heyerdahl’s incredible 4,300 mile journey across the ocean on a balsa wood raft. The film became the first in the country’s history to receive both an Academy Award and a Golden Globe nomination as the year’s Best Foreign Film.

To celebrate the Blu-Ray release of “Kon-Tiki,” I sat down with directors Joachim Rønning and Espen Sandberg. I mention that it’s been Scandinavian Directors week for me, having just spoken to Renny Harlin a few days earlier. Hearing this they question me on Harlin and what he’s working on. Finally the interview begins and the pair talk about honoring Thor Heyerdahl, their national pride and how things are going on their next project, “Pirates of the Caribbean: Dead Men Tell No Tales”

Mike Smith: This has been my week for Scandinavian filmmakers. I just spoke with Renny Harlin the other day.
Joachim Rønning/Espen Sandberg: (both laugh).
JR: How did that go?
MS: Very well. He’s really high on the “Hercules” movie he’s finishing up.
ES: Right, right.

MS: “Kon-Tiki” received an Academy Award nomination as Best Foreign Film. Obviously that’s a great honor personally but did it have extra meaning to you because it was a representative of your country?
JR: it was (pauses)…one of the best moments in our lives. (they both laugh). That’s all we can say. That morning, when we got the announcement. Because it is, in so many ways, the biggest reward you can get as a filmmaker. To be recognized in the US…to be recognized in the world…that meant so much for the film. For “Kon-Tiki” to have that when it goes traveling around the world, it really means everything for the film. And for us as filmmakers. We wouldn’t be sitting here in our production offices speaking with you if it wasn’t for that. Everything comes together.
ES: As for representing the country, absolutely. But that’s not really the first thing you think about (laughs) when you get that news. It was the first Norwegian film to be nominated both by the Oscars and the Golden Globes and that is a huge deal for our country.

MS: How did you get involved with “Kon-Tiki?”
JR: It was a story we’d grown up with. Espen and I began making films together when we were about 10 years old. We grew up in a small town. Thor Heyerdahl grew up in a neighboring town so he always had a presence in our lives. And he is the only Norwegian to win an Academy Award so as a filmmaker he was a huge inspiration.
ES: We always wanted to bring that story…the story of Kon-Tiki…to the big screen. But of course, it was such a huge endeavor. It took four years to finance. It was the biggest film production ever in Scandinavia.

MS: You’ve worked together for over two decades…(they both laugh)…do you split up the duties of directing? Do you direct together or do you each handle certain scenes?
ES: We basically do everything together, especially in pre-production and post production.
JR: It’s a very collaborative process and it’s the only way we know how to make movies. On the set it is divided somewhat. Espen concentrates more with the actors and I work more with the visuals. And that’s basically not to confuse the actors too much. We try to have one voice in accordance with them. It’s a very collaborative process and it’s how we’ve always done it.

MS: Have you ever had an instance where maybe one of you has yelled “cut” and the other one looks over and shakes his head? (they both laugh)
ES: No! You’d be surprised. Of course we both have different tastes but I think at the end of the day we both find common ground…what’s best for the scene and for the film.
JR: I think it’s actually an advantage to have two heads working. It’s a big deal for us to be unanimous. In front of everybody at least (laughs)

MS: You both are slated to direct the next “Pirates of the Caribbean” film. Can you give an update as to where that project is?
JR: Yeah! We’re in pre-production. We’ve been in pre-production for a couple of months and it’s inching along every day. It’s a dream come true, really, to be able to work with Jerry Bruckheimer and the Disney camp…with these actors and the rest of the crew. They’re the best in the world. It’s coming together. We have a fantastic script by Jeff Nathonson (“Catch Me If You Can,” “Rush Hour 2 and 3”). It’s really funny. And touching. It’s a true adventure movie and, in that sense, it reminds us of the kinds of movies we grew up with…the Indiana Jones films and stuff like that. Those films made us want to become filmmakers.

MS: That’s so cool. That’s almost exactly the same answer that Renny gave me when we talked about “Hercules.” He had grown up enjoying these films so much and finally getting the chance to make one is the ultimate honor. (they both laugh)
ES: That’s it exactly. We really feel great! 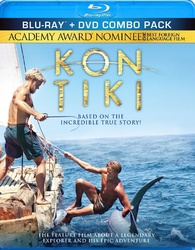 I heard about “Kon-Tiki” came to my attention during the Oscars earlier this year. It was nominated for the 2013 Academy Awards for Best Foreign Language Feature Film (Norwegian). I am also a sucker for a good film at sea and this really seemed exciting and entertaining. I have to say I was blown away and this film no question should have deserved the award. Due the success of this film, the Norwegian directors Joachim Rønning and Espen Sandberg’s next project is going to be the fifth “Pirates of the Caribbean”, so they hit it big already. The film is extremely visual and packs some of the best special effects, I have I seen recently in a non-big budget film. Highly Recommended.

Official Premise: Norwegian explorer Thor Heyerdahl (Pal Sverre Hagen) crossed the Pacific ocean in a balsa wood raft in 1947, together with five men, to prove that South Americans already back in pre-Columbian times could have crossed the sea and settle on Polynesian islands. After gathering financing for the trip with loans and donations, they set off on an epic 101 day-long journey across 8,000 kilometers, all while the world was watching. Kon-Tiki tells about the origin of Heyerdahl’s idea and the events surrounding the group’s voyage. Earlier this year, Kon-Tiki was selected to represent Norway in the Best Foreign Language Film category of the 85th Academy Awards.

It recently came to my attention that the US theatrical cut was in fact edited from 119 minutes to 96 minutes. So this a little bit disappointing that we do not get the extended cut, especially since this version was the one that was nominated for the Academy Award as Best Foreign Feature Film. Anchor Bay did gives this film some love delivering the film as a Blu-ray + DVD Combo Pack. They both also come with the original Norwegian language track, as well as an English dub. No question, I prefer the original. The 1080p is crystal clear and plays well off the films amazing CGI effects and gorgeous cinematography.

I have to have the special features may not be much but they are still worth checking out, especially for the “Visual Effects Featurette”, which runs just under 10 minutes. Great detail before and after CGI effects focused on the Great White scene. I originally watched this online and I knew I immediately had to see this film just based on this one featurette. “Kon-Tiki: The Incredible True Story” is a 25 minute extra focusing on the actual expedition that Thor Heyerdahl made in 1947 and its legacy. I would have loved to see a commentary track included by our directors taking about making this visual masterpiece.