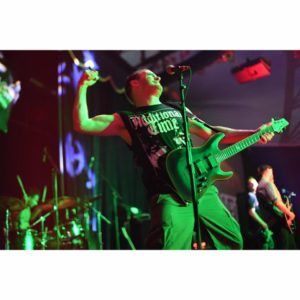 The iconic Los Angeles hardcore band STRIFE is celebrating the 20th anniversary of their landmark second LP “In This Defiance”. To commemorate the release the band has put together an extremely limited vinyl release and to find out more about the album Media Mikes spoke with STRIFE guitarist Andrew Kline.

Adam Lawton: Can you tell us about the limited LP package you have coming out commemorating “In This Defiance”?

Andrew Kline: I wanted to do something special for the 20th anniversary of In This Defiance. We teamed up with WAR Records to produce a bubble gum pink colored record that comes in a hand numbered and hand silkscreened cover. There were only 100 made and were sold with a limited edition long sleeve.

AL: What was it like for you looking back and revisiting the album?

AK: “In This Defiance” is my favorite Strife album and we still play a lot of the songs live. It’s a record that I feel doesn’t seem outdated and still fits in with what’s going on within the current hardcore scene.

AL: How do you feel the album relates to the world we are living in now in 2017?

AK: Lyrically, In This Defiance is a pretty personal record. The songs “Grey” and “Blistered” still resonate with me as those songs really relate to the world now.
“Blistered by a raging sun’s flames
Mankind sealed its fate in its haste
Warning signs sent time after time
We just sit back in all this waste”

AL: There seems to be sort of a resurgence of hardcore bands from that late 80’/90’s starting to happen what do you feel has sparked that?

AK: I think that every few years there are a new crop of hardcore kids. They get involved with the scene and they start looking back and getting into bands from different time periods. I think this really created the demand. We’ve definitely seen more than a few bands reunite over the past few years, and I am ok with that.

AL: Are there plans to do some shows where you perform the album in its entirety?

AK: We are hoping to do some shows to support the anniversary of “In This Defiance” at some point before the end of the year. Fans can check out http://strifelahc.comto keep up to date with what is going on.

Israel Horovitz is a veteran playwright and stage director who at seventy-five years old is bringing one of his plays to screen for the first time with the film adaptation of My Old Lady.

My Old Lady stars Kevin Kline as Mathias a down on his luck author who is brought to France when his father dies leaving him a Parisian flat in his will. Mathias dreams of profiting off the sale of said-flat however are crushed when he finds the flat comes with a tenant (Dame Maggie Smith) to whom Mathias owes money to under a peculiar French real estate arrangement called a “viager.”

Horovitz and Kline were in great spirits when they sat down recently in New York to discuss adapting the play to film after its successful stage life.

How familiar were you with Israel’s play before you got involved with the film?

Kevin Kline: I read it in French.

Israel Horovitz: Oh that’s right, I gave it to you in French or somebody–

Kline: Some crazy French producer who thought I could actually speak French well enough to play it when it was done in Paris.

Horovitz: You didn’t see it in New York though?

In that version, was Mathias French?

Kline: No, he was American. That’s what was so–they wanted me to play this American but who spoke French. In the film version, the idea that he couldn’t speak French, this was something new.

Horovitz: The play was done in, I don’t know, fifteen or twenty languages around the world but it was most popular, or very popular in France. It was done in a 1200 seat theatre and played for a couple of years.

Mathias is a very sort of world-weary character, was it difficult to get into that mindset?

Kline: [In hilariously World-Weary tones…] I can’t believe you’re asking me this, same old, tired old question! World-weary? I do world-weary very readily. In fact I’m sick of that question! I’m weary of all this nonsense. [Losing the weariness]… World weary? Well he’s just a mess!…I never quite understood him. Nor did I wish to. I think it’s a good thing for an actor not to–I’m always wary of actors and directors who say ‘I’ve got an idea about Hamlet, here’s the deal, here’s what his problem is’ or ‘Here’s an idea I’ve got for Lear’ Or if an actor’s saying ‘You know what I’m playing? What my subtext is?’ I don’t wanna know! No. There’s a certain point to, a degree of ignorance which I’ve maintained precisely.

Horovitz also spoke at length about bringing together his main cast:

Horovitz: Kevin was the first–I didn’t want to do a movie that had, I don’t want to say unknown actors, but less-than-great-actors. Because some years ago the pope came to Paris and there was a big to-do with French writers saying you must know the division between church and state. They went out to the airport with signs protesting and the pope was this little old man about to die and the first thing he said, got off the plane and there were microphones, he said, “It’s a pleasure to arrive somewhere in this life as an unambitious guest.” And I directed this movie as an unambitious guest. Because I wasn’t trying to build a big film career…I just wanted to make a beautiful movie and I settled on that story because I thought the story could be funny and it could be serious at the same time. It could be possibly the kind of movie that I would love to see if I didn’t do the movie. And we’d shoot in Paris and like, what’s wrong with that? And my daughter would be the producer and what’s wrong with that?

…And I asked Kevin who was famously “Kevin Decline” and he said YES and then I roped him in. And he did the reading and we’re both theatre rats, so we did readings at my house and really, he really knew who he was playing and helped me you know, refine it. And then Maggie said yes and I flew to London and had a lunch with her and she said “I had twenty-five scripts offered to me and I’ve chosen yours, do you want to know why?” And I thought ‘Oh my god, do I really want to know? Okay, why?’ and she said “Because I don’t have to die at the end of your movie.”

What was it like to work with Maggie Smith?

Had you worked with her before?

Kline: No, no no no no. She’s probably the first dame. No I worked with Dame Joan– actually Lady, The Lady Olivier, Jane Plowright, who’s may be one of her best friends.

Horovitz: Judi Dench is Maggie Smith’s best friend. They’re both 79 turning 80 and they’re both terrified to turn 80. They talk to each other on the phone every day of their lives.

Kline: She was great she’s ..when I stopped finally boring her, pleading with her for more theater stories, you know I wanted to hear about all of her experiences in the theater. But, oh, consummate professional. Remember the day where she had to–she faints in the movie. Even if a thirty-year old faints, they say ‘okay, there’s a mat here and you’ll fall out of frame onto a nice, soft mattress.’ This was like the first take, um, she just fell on the floor!

Horovitz: She scared the hell out of–

Kline: All of us! Could have broken a hip, but no, was fine.

Horovitz: I did three takes and she would have gone on and I thought, ‘I can’t be the man who killed Maggie Smith.’ And I said “I’m very impressed, that you could do that Maggie” and she looked at me with this kind of sexy voice and said “You’d be amazed at what I can still do.”

When did you first encounter the concept of a “Viager”? And what was your reaction to it?

Horovitz: Well I had fifty something of my plays translated and performed in France. I spent tons and tons of my life there and I couldn’t believe it when I first heard about it. And then I started to research it and I saw these real estate agents that specialize only in viager apartments. It’s much more complicated than I made it in the movie. Because you can buy a viager apartment that has, they say “deux tete”, two heads. And you’re buying the husband and wife and you have to outlive both of them. So at first I thought, ‘man this is the most barbaric thing I’ve ever found!’ and then I realized, you know, it’s not so bad. If somebody’s old and they have no money–

Kline: Gives them a new annuity.
Horovitz: And they don’t have kids to leave their apartment to…If somebody gives them a bunch of money and pays them to stay in the apartment, pays them a little something and then they know they’ve got a roof over their heads for the rest of their lives, it’s fine. It’s not so much a gamble for that person, it’s a real security.