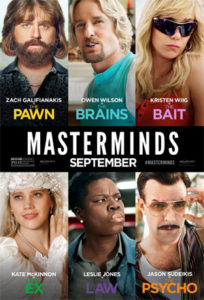 What do you do if you’re a short, dumpy man with a Prince Valiant haircut that is hopelessly in lust with your hot female co-worker? If you’re David Ghantt (Galifianakis) and that co-worker is Kelly Campbell (Wiig), you agree to steal $17 million from your employer. Piece of cake!

Based on a true 1997 event, “Masterminds” has been sitting in the can for a year while the studio went through bankruptcy. The film is extremely funny at times and features a cast of comedic who’s-who. Galifianakis gives Ghantt a quiet dignity, making him appear to be oblivious to those who would take advantage of him. Wiig is equally sweet. Wilson is part of an amazing supporting cast which also includes Kate McKinnon, Jason Sudekis and Leslie Jones. McKinnon, who stole this past summer’s “Ghostbuster” reboot, does the same here as David’s unsmiling fiancé, threatening to withhold consummation if he continues to eat Googoo clusters.

The script has fun with the film’s premise and setting, which is the late 90’s where everyone in the South hangs out, robs banks and hire hitmen. With every instance you can’t help but be amazed how such a stupid group of people could pull off the biggest cash robbery in United States history. As things get crazy, the setting jumps first to Mexico then to North Carolina where the story climaxes. The gags are hit and miss but when they hit they’re pretty amusing.