I’m not much of a fan of films derived from video games, however I do appreciate “Kingsglaive: Final Fantasy XV” for its stunning digital art.

Shot in full motion-capture CGI, the film is a visual work of art with some fun voice acting. However, if you’re not familiar with the game or story, you may find it a bit overwhelming. I was not at all familiar with “Final Fantasy” but it was still cool to look at and marvel at its artistry.

Watching on a 4K UHD disc certainly makes the presentation even more amazing and the sound quality is pretty amazing. The beauty of the film is that when you first glance at the characters, they look amazingly real! The full motion capture is astounding.

As for the plot, to break it down lightly, the story takes place on a planet called EOS, which is like a futuristic Earth. There is a Kingdom called Lucis, which houses a magical crystal that was given to the Lucians by gods. The power is used to protect the people and give power to the ruling king and his soldiers, who are known as the Kingsglaive.  With these powers, the Kingsglaive can ward off enemies.

Anything that is magical and promises powers will surely arouse jealousy and create wars and the crystal is no exception. Friends are stabbed in the back, characters are not whom they say they are and mega monsters, demons and spaceships riddle the landscape.  Everything climaxes into one big, epic final battle, which leads up to “Final Fantasy XV,” the video game.

Once again, the visuals are quite stunning. In fact, this film has some of the best motion capture and CGI work I’ve seen on the big screen with room shaking LFE activity that’ll give the subwoofers a workout. The level of detail is staggering. Hair stubble and skin pores are clearly visible and come to breathtaking life!

Even for the novice, a viewing of “Kingsglaive: Final Fantasy XV” will give you a glimpse of the technical achievements of current film technology. It is certainly the next step in motion capture animation. 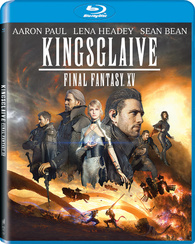 I am a huge fan of “Final Fantasy” and its last film “Final Fantasy VII: Advent Children”. It is a visual marvel that still blows me away each time I watch it.  With “Kingsglaive: Final Fantasy XV”, I found myself just struggling to stay awake while watching. It is slow moving, all over the place and very hard to follow. The story feels like a tangled web and the characters are so similar that I literally had a hard time tracking who was who. I might not be the target audience of this film since I am not really anticipating the new upcoming game “Final Fantasy XV”.  When it comes to  the films technical aspects it is quite impressive. It looks great and when the action kicks in it is epic but it doesn’t kick in enough to make it worth wild.

Official Premise: The magical kingdom of Lucis is home to the sacred Crystal, and the menacing empire of Niflheim is determined to steal it. King Regis of Lucis (Sean Bean) commands an elite force of soldiers called the Kingsglaive. Wielding their king’s magic, Nyx (Aaron Paul) and his fellow soldiers fight to protect Lucis. As the overwhelming military might of the empire bears down, King Regis is faced with an impossible ultimatum – to marry his son, Prince Noctis to Princess Lunafreya of Tenebrae (Lena Headey), captive of Niflheim, and surrender his lands to the empire’s rule. Although the king concedes, it becomes clear that the empire will stop at nothing to achieve their devious goals, with only the Kingsglaive standing between them and world domination.

Easily best part of this film is its technical merits. The 1080p transfer looks outstanding. The fully digital animated feature just looks beautiful. The fight scenes when they are present are breathtaking. The DTS-HD Master Audio 5.1 is also a high note delivering its action to an epic level, unfortunately it doesn’t last long. The special features are lacking like the film. There are four short featurettes included. “A Way with Words: Epic and Intimate Vocals” has the voice cast discussing the film and their character. “To Capture the Kingsglaive: The Process”  looks into the motion capture technology used here. “Fit for the Kingsglaive: Building the World” focuses on the design and environment (in Japanese with English subtitles). The last is a piece of the films score “Emotive Music: Scoring The Kingsglaive” by John R. Graham.