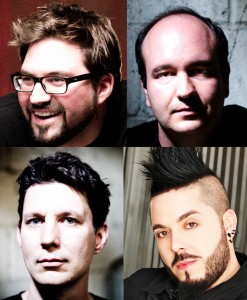 MG: Kern, you not only had your directorial debut, you also took the role of Editor, Producer, Co-Writer, was it hard to juggle?
Kern Saxton: They all grew out of necessity. I wanted to do a project like this. Destin and I had this crazy idea and we were actually working on another screenplay. A couple of years later…here we are. I knew that budget-wise, I was going to have to take on many different roles in order to make it happen. I think that being the Co-Writer, Director, Producer and Editor, it is not out of some place where I creatively have to do those jobs. Editing is easier for me for projects that I have directed. It is just quicker at the end of the day. We had to do every stage of production very quickly in order to save money and time. It was decided by the group that I would take on the editing. That is the whole game we are playing with this film is to get the biggest impact with the least amount of resources.

MG: Destin, during filming having co-wrote the script, where you able to assist with each scene?
DP: Kern and I luckily share a single brain as for what something is suppose to look or feel like in a particular scene. Even if I wasn’t on set, I knew that whatever Kern was doing would be exactly what I would do. I’ll give kudos to Kern.

MG: Neal, this was your first go as producer, what do you have planned next?
NF: Well for me, it was a really interesting experience. I work for a larger company. I had access to all these tools from working on films like “Resident Evil” and “Silent Hill”. I had this experience but it was all for a company and with big producers and so they weren’t mine. For me making “Sushi Girl” was a way to not only get to use these tools that I have been learning but also show what I can do. I used to live in Japan and I had some experiences with the Japanese mafia.  That led me to write a couple of scripts from those, so that is one of my top priorities and definitely in my future.