There’s been an unlikely-sounding rumor circulating around Hollywood in recent weeks, and if you hadn’t heard it before, you’ve just heard it in the title of this article Allegedly, Michael Keaton is in talks to return to the role of ‘Batman.’ Keaton is 68 years old. He hasn’t played Batman since “Batman Returns” in 1992. More importantly, someone else has the official job of being the DC Universe’s version of “Batman.” Could there be something behind this unexpected story, or is it nonsense? Let’s see if we can separate the fact from the fiction.

First of all, we know that Robert Pattinson is Batman. The former “Twilight” star won the role last year after Ben Affleck’s short and uninspiring time in the Bat-suit, and he doesn’t make his debut as the character until his movie “The Batman” comes out next year. It’s public knowledge that he’s contracted to more than one appearance as the character, and fans are already openly speculating about whether the timeline of the on-screen universe could be twisted enough to allow Pattinson’s Batman to come up against Joaquin Phoenix’s gritty and compelling version of the Joker in a film for the mid-2020s. Pattinson is a young, strong man, and won’t be giving the role of a lifetime up any time soon unless his debut in the famous costume is a box office bomb. That seems unlikely.

This Michael Keaton film, if rumors are to be believed, won’t have anything to do with the Pattinson films and won’t pollute the existing DC Comics timeline. In fact, it won’t even be a standalone movie in its own right. Instead, Keaton’s big comeback would be for a cameo role in the upcoming film “The Flash,” starring Ezra Miller as title character Barry Allen. Those of you who hoped that the trend for superhero movies might have come to an end after the last “Avengers” film hit the big screen are in for a disappointment. There are plenty more to come, and “The Flash” is just one of them. According to insiders who claim to have seen the script and are familiar with the project, it calls for an appearance by a senior Batman, accompanied by Michelle Pfieffer, who will apparently reprise her role as Catwoman from “Batman Returns” alongside the star.

If the thought of bringing back Keaton for a throwaway performance upsets you, don’t lose hope just yet. Look away now if you don’t want to see a potential spoiler, but apparently, this new “Flash” film will create an alternative reality within the DC Comics universe, allowing Keaton’s Batman to exist independently of Pattinson’s. Keaton would then appear as Batman in a number of other DC Comics projects, and may eventually get a new film as the fabled Caped Crusader in his own right. At this point, all of this is little more than speculation, but the news has been reported in so many different publications that it would be rational to assume that there’s at least some fire to go with all the smoke. One publication that’s gone a step further than all the others is the Hollywood Reporter, which claims that Keaton’s Batman will be a mentor figure to other superheroes right across the DC Universe, not dissimilar to the role Nick Fury plays in Marvel films.

The idea of an older Bruce Wayne or Batman is a fascinating one, and one that we’ve never seen explored on the big screen before. Presumably, he’d be disinclined to put the Bat-suit on unless the situation becomes excessively grim, but the concept of a Batman who has spent an entire lifetime fighting crime and is now headed for retirement is an interesting one. We’re even more interested in the idea of him having some kind of late-life domestic bliss with Selina Kyle, who will presumably also have said goodbye to her days of wearing a latex catsuit. The idea opens up a series of possibilities that couldn’t be explored within an ordinary “Batman” movie, and it’s original. Originality doesn’t come along often in superhero films, and so when it does, it ought to be applauded.

The fact that there’s been so much buzz among fans about the possibility of seeing Keaton as Batman again should be enough to confirm to DC that the idea is worth pursuing. Part of the appeal will be down to nostalgia. With few exceptions, the older “Batman” films are more widely appreciated by the public than the newer “Dawn of Justice” era films. While we won’t pretend that online slots websites are a perfect measure for this, if you checked one, you’d see what we mean. You’re highly likely to find Crime online slots based on “Batman Begins,” and the old Adam West “Batman” series. You’re far less likely to see anything featuring Ben Affleck’s face. The companies who make those online slots know which incarnations of Batman are likely to tempt people into spending their money, and if they know it, movie producers know it as well.

Keaton’s relationship with Batman over the years has been complicated. It’s been said of the character that it either makes your career or destroys it. Christian Bale’s acting career reached the apex of Hollywood after his “Batman” appearances. Val Kilmer’s was utterly destroyed. George Clooney got away with it because he demonstrated that he had a sense of humor about the dire “Batman” film he made, and Keaton seemed to disappear for a while after 1992. For the rest of the 1990s, he complained that the movies had painted him into a corner and made him typecast. Within the past decade, though, he’s had a late-career resurgence and even felt comfortable performing a pastiche of both himself and the character in 2014’s Oscar-winning film “Birdman.” If he’s entered into talks about becoming Batman again, it’s a sign that he’s finally at peace with the role and his own past.

DC probably wanted to keep this information under wraps, and they’ll be annoyed that it’s leaked, so don’t expect confirmation about Keaton’s involvement from them any time soon. Until we get solid news, excited fans will be projecting the Bat sign into the sky and hoping Keaton answers it. 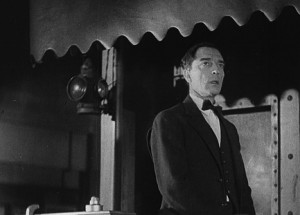 In 1934, Buster Keaton signed a contract with Earle W. Hammons Educational Pictures which focused on comedy short subjects. This Blu-ray release is very impressive and includes over five hours within its 16 educational shorts. In fact, the reason why this is amazing set is because 14 of these shorts have never been available. Fans of Buster Keaton needs to check this out as it is one very cool set.

The video looks great with its 1080p transfer. These shorts were remastered in HD from 35mm negatives, so they are high quality but some of the shorts still show their age. The audio includes an LPCM 2.0 Mono track, which works well with the content but is really nothing special.

There are very few special features but I feel that the shorts are enough to make this release worth purchasing.    On the first disc, there is a photo gallery with sixteen stills.  On the second disc, there is a funny but short feature called “Why They Call Him Buster”, which features Buster falling. Inside the Blu-ray case, there is a booklet with overviews of each film in the set.