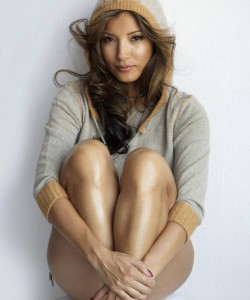 Kelly Hu is best known for her roles in films like “The Scorpion King” and “X2: X-Men United” and is currently guest starring on The CW’s “Arrow” and Syfy’s “Warehouse 13”. She also has done quite a bit of voice over work ranging from Stacy Hirano on “Phineas and Ferb” to Karai on Nick’s “Teenage Mutant Ninja Turtles”. Media Mikes had a chance to chat with Kelly about her role on “Teenage Mutant Ninja Turtles” and what we can expect from Karai.

Mike Gencarelli: Your character on Nick’s “Teenage Mutant Ninja Turtles”, Karai, has been around since the 1992 comics. How did you prepare for playing such a well-known character?
Kelly Hu: Fans are going to hate me when they find out that I was not familiar with the character when I auditioned [laughs]. I did do a lot of research online though. There are a bunch of great fan sites for her and “Teenage Mutant Ninja Turtles”. From what I understand this Karai is written slightly different than past Karai’s have, which is great so then it is not so predictable and audiences  who grew up with her can still enjoy it.

MG: When you signed on to the role where you aware that you would be revealed as Shredder’s daughter?
KH: I had no idea what was going to happen [laughs]. All I knew was that she was going to beat up a lot on the Turtles and other boys and I was going to get to do a lot of punching and kicking noises [laughs]. I spend so much of my time in the recording booth just grunting, hitting and making all these effort sounds.

MG: I guess you didn’t know that you would also get a chance to get some workout during recording?
KH: I know right! I think it is so funny that since I do martial arts, I am constantly getting type-cast as a fighter or a tough girl. I don’t mind at all since I really love doing it. But I think it is funny that even in my voice over work I am a martial artist [laughs].

MG: I love your character design in this show and she has changed quite a bit from her first appearance. Did you see her design prior to finding her voice?
KH: I love the way she looks. I do not recall if I had a picture before I started. You know, it is really just my own voice though. I try pitching it up a bit to sound younger like more around 20. I think the reason why I got this role comes down to me doing all the grunt sounds [laughs]. I think that is the only reason why I got this job [laughs]. But I really do love it.

MG: I know you got a little something going on with Leonardo but if you had to choose what would be your favorite turtle?
KH: I like Mikey a lot. I love the way he sounds, it is so cute. When Greg (Cipes) does his voice, I just melt. You just want to pick him up and hug him. Greg really brings his inner child out. I don’t know if he will be embarrassed that I shared this secret – I don’t think so – but the first day we were all together in the booth, Greg proceeded to pull down this pants and show up his “Teenage Mutant Ninja Turtles” underwear and then danced around a bit [laughs]. Greg really is a child trapped in a man’s body and he is great in the role.

MG: Are you always with the rest of the cast when recording?
KH: Sometimes we are. Lately, I have been alone since I have been traveling quite a bit. I was recently in Vancouver shooting a pilot (“The Hundred” for The CW). So the last two  sessions, I have been by myself. I really enjoy it much more when everyone is in the same room. The guys are just so much fun and we have a great time together.

MG: Tell us about your upcoming episode “Karai’s Vendetta” on April 27th?
KH: I am really looking forward to this episode. This one is going to be really action packed with a lot of twists and turns. Karai is at this point where she making a change in her life. She wants to join up with the guys and do good. I love that she is not just a bad girl. She wrestles with being good and being truthful. So she really has some great and fun layers to her.

MG: You are probably known best in the voice over world for your work playing Stacy Hirano on “Phineas and Ferb”. How does that role compare?
KH: I love doing “Phineas and Ferb”. I think they are a lot alike. Stacy doesn’t do martial arts but she is kind of sassy and fun. She is Candace’s sort of voice of reason, who is completely out there and crazy. Stacy is the one who gets to bring her back down to earth every once in a while. Stacy is also a little bit quirky and social out there sometimes [laughs].

MG: What else do you have in the cards?
KH: I am still waiting to hear about this pilot, so we have our fingers crossed for that. I am still reoccurring on The CW’s “Arrow”, they haven’t killed me off yet. So hopefully I will be back next season. I also have had a reoccurring on “Warehouse 13” and should have some new episodes coming up soon as well.