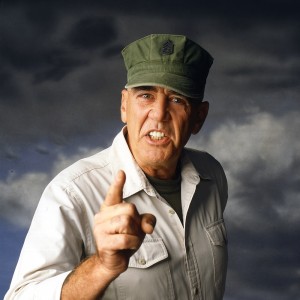 R. Lee Ermey aka “The Gunny” is a retired United States Marine Corps Staff Sergeant and an honorary Gunnery Sergeant. He is best known for his role of Gunnery Sergeant Hartman in Stanley Kubrick’s “Full Metal Jacket”. Since then he has appeared in many films and TV including hosting shows like “Mail Call” and “Lock N’ Load with R. Lee Ermey”. His last TV series just finished it’s first season on Sportman Channel called “Saving Private K-9”. Media Mikes had a chance to catch up with R. Lee to chat about his new series and his love for dogs.

Mike Gencarelli: What drew you to host “Saving Private K-9”?
R. Lee Ermey: This has been a really fun show to do. It’s called “Saving Private K-9”, come on everyone in America loves dogs. Hell yeah, this is America. I am a dog lover. I had six dogs myself…up until a few years ago. The kids were starting leaving home and each one took their dog with them and the next thing you know I am down to two dogs. I am going to have to go down to the kennel and adopt a couple of more [laughs].

MG: Did you have any experience with these dogs during your time in the United States Marine Corps?
RLE: RLE: Absolutely! That is what this is all about. It is about military dogs, working dogs, police dogs and law enforcement dogs. It is just a beautiful thing for me. I have worked with the dogs that sniff out bombs and landmines. They have saved thousands of lives during the war in Afghanistan. They are amazing animals.

MG: Did you need to research much on the topic before doing this show?
RLE: No, since I had experience working them. I did find out that years ago, if the handlers were killed or injured, the dogs used to be euthanized thinking that they were a one guy deal. They have found out in the past that if something happens to the handler that the dog can be handed over to another handler. It would take maybe a month or so but the dog transfer over very nicely.

MG: How did you end up at Sportsman Channel?
RLE: I just happen to be a sportsman [laughs], so it seems like a good fit. Just this year, Sportsman Channel has really decided to make their mark in this world. Instead of just hunting shows, they are now reaching out with four or five really great new shows. It is becoming a station that you and I and everyone in America can watch even if you disagree with hunting. We have done 10 episodes, so far and since the show has been such a great success, I believe we are gearing up to do many more. I just can’t believe how many people have been drawn to Sportsman Channel because of this little show.

MG: What do you see for the future of the show?
RLE: What I would like to think that we will do outside the show will be to help some of these dogs get adopted. These dogs are very laid back and well trained. After 8-10 years, they look to retire these dogs that have been protecting our country and they put them in a kennel. We need to get these dogs adopted and into good homes. I would also like to show to branch out to the training of the dogs as well. I would like get in on the ground floor and show people how the dogs trained and brought along, so you might be able to train your own dog. A good well-disciplined down is just a joy to be around.

If you are a fan of “Doctor Who”, then you most likely know about his longtime robot pet dog, K-9. This series is a children’s sci-fi/comedy spin-off re-imagined by “Doctor Who” creator Bob Baker. “K9” first made an appearance in the 1977 “Doctor Who” episode “The Invisible Enemy” and has since become an iconic television character. The show is a bit of a stretch for any “Doctor Who” fan. The show isn’t on par with the charm that the series. It is a mix of live action characters with visual-effects, but the episodes don’t come with the highest quality for televsion. As much as I enjoy “Doctor Who”, I feel that this “K-9” would have been better left within in the “Doctor Who” series.

Official Premise: Blasting back into action via a space time manipulator, everyone’s favorite robot dog arrives in late 21st-century London, now scarred by alien intrusion and government rule through their cybernetic police force. With the assistance of teenagers Jorjie, Darius, drifter Starkey and Professor Gryffen, K9 becomes Earth’s front-line defence against dangers threatening from any place – and anytime – in the galaxy! They will have a lot of fun, action, adventure, and some jolts along the way, saving the earth from alien creatures, scary monsters and more than a few nasty humans!

Episode included: Regeneration, Liberation, The Korven, The Bounty Hunter, Sirens of Ceres, Fear Itself, Fall of the House of Gryffen, Jaws of Orthrus, Dream-eaters, The Curse of Anubis, Oroborus, Alien Avatar, Aeolian, The Last Oak Tree, Black Hunger, The Cambridge Spy, Lost Library of Ukko, Mutant Copper, The Custodians, Taphony and The Time Loop, Robot Gladiators, Mind Snap, Angel of the North, The Last Precinct, Hound of the Korven, the Eclipse of the Korven

The 4-DVD set contains all 26 original episodes from the short-lived series. Shout Factory still delivered a nice DVD presentation. The show just back some decent special effects and I would have loved to see this show get the Blu-ray treatment. The special features on the complete series DVD are not that impressive overall. There is a “Interview with K9”, which is fun for kids. “The Making Of K9 Documentary” is a decent yet short behind-the-scenes look into the show. I would have loved to see a few commentary tracks included on the episodes.