January 19, 2018 – Los Angeles, CA – Arizona’s next, breakout rock act Remember The Monsters have announced today plans to release their debut, full-length album, The Pieces Remain, on March 16th. Gearing up for the record’s unveiling, the band has partnered with NewNoiseMagazine.com to premiere the record’s first new track, “Romeo & Juliet.”

Commenting on the new song, the record’s producer Cameron Mizell (Sleeping With Sirens, Danny Worsnop) says, “This song makes me feel all of the feelings all at once, intensely, and when the song is over I feel as if I was just beaten senselessly in a masochistic fashion. It’s fucking bizarre in the best way.”

Remember The Monsters’ vocalist/guitarist/songwriter Ashten Banks add’s the song is “my sick and twisted take on a literary classic.”

Blending the wide range and dynamic sounds of their many influences, Remember the Monsters combines the sleazy glam and soaring melodic hooks of Rock N’ Roll (think Mötley Crüe and Guns N’ Roses) with the hard-hitting edge and soulful introspection of their modern contemporaries. Genre defying and passionately driven, the band delivers a listening experience unlike any other. 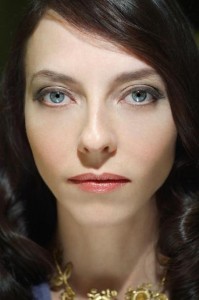 Juliet Landau is known best for her role of Drusilla from “Buffy the Vampire Slayer” and “Angel”. Juliet is in the new film “InSight”, directed by Richard Gabai. Media Mikes had a chance to chat with Juliet about her role on “InSight” and her TV and film career.

Mike Gencarelli: Tell us how you got involved with the film “InSight”?
Juliet Landau: I worked with the writer Aaron Ginsburg on a staged reading that he was directing. He’s very talented and he asked me if I would do the film.

MG: Tell us about your experience working on the film?
JL: It was a lot of fun. The director, Richard Gabai is wonderful to work with. I liked playing the straight doctor role. It was a change of pace from Drusilla and some of the characters I’ve played recently who were schizophrenic or in extreme emotional circumstances. I was the calm, reassuring, empathic, reasonable character in this one. The odd thing was that we shot in an active hospital. From the entrance if you went left, that’s where our “base camp” was. But if you went to the right, they were admitting people. Folks being wheeled in kept asking me questions. I was after all, standing there, wearing a lab coat and had to explain that I wasn’t a real doctor!

MG: You are well known for your role of Drusilla on “Buffy the Vampire Slayer” and “Angel”, what did you like most about playing her?
JL: Working with Joss Whedon was incredible! I loved the writing. Drusilla was such a rich character, rife withdimension. There was a lot of pain in her, but she was also capable of boundless love. She was diabolical but eternally childlike. She was mercurial, incandescent and moved to her own drummer. She was an incredibly powerful, forceful creature.

MG: Do you have any plans to write more “Buffy the Vampire Slayer” comics?
JL: Scott Allie at Dark Horse and I have been chatting about the possibility.

MG: How was it getting to work with your dad in “Ed Wood”?
JL: It was amazing. Tim Burton makes the most creative, fluid environment. It was a dream set. I think we all fell in love with the characters we were playing.

MG: What can you tell us about your web series “Naught for Hire” and when can we expect it?
JL: Jeffrey Berman has created and written the web series. It is funny, stylish and unique. I am excited to start working with him on it soon.

MG: Tell us about your upcoming film “The Yellow Wallpaper”
JL: It is based on the short story written by Charlotte Perkins Gilman in 1890. I play the title character. I would say the feeling of the film is a bit akin to “The Others” with Nicole Kidman.

MG: Any other projects in the works and do you have any future plans to direct again?
JL: I just wrapped on a film called, “Dark Hearts” directed by Rudolf Buitendach. Gorin Visnjic, Kyle Schmid, Lucas Till, Rachel Blanchard and Sonja Kinski are in it. I play a beatnik-inspired artist and gallery owner, who is always a bit stoned. I have a lot of other projects in the works, which include acting, producing and directing. Also, I just signed with a UK agent and have my British work visa, so I am currently in London taking lots of meetings.