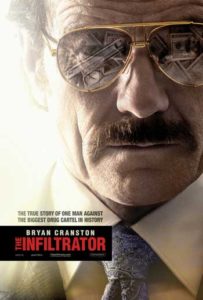 Bryan Cranston is the cure for any of Hollywood’s humdrum scripts that need a jolt of energy. We’ve seen “The Infiltrator” before. There are plenty of movies about the lengthy history of the worldwide drug war. But Cranston’s multi-faceted acting abilities create tension and heart pounding action where there isn’t. If Cranston wasn’t given the key role of “The Infiltrator”, I may have easily been telling you that “The Infiltrator” is a run-of-the-mill undercover crime movie that couldn’t find a fresh way to describe a fascinating story.

Cranston plays U.S. Customs Service special agent, Robert Mazur. He’s undercover as Bob Musella, a money launderer for the cartel and various drug dealers. He’s trusted amongst the low ranking members of various gangs because he plays the part. But Mazur is no longer interested in the criminal table scraps that Customs offers him. Mazur is going after the world’s seventh largest private bank in the 1980’s. He knows they’re the real threat because they hide and launder some of the world’s most dangerous criminal’s funds.

“The Infiltrator” has a lot going on. Too much in fact. Without the movie flat out saying it, Mazur is drawn up like a one man wrecking crew. He’s going after the powers behind the world’s drug market as well as the most crooked financiers in the world in one fell swoop. That alone should be enough for “The Infiltrator”, but the story becomes bloated when factoring in Mazur’s problems living the double life. Mazur constantly worries about the loved ones he’s putting jeopardy, while clearly developing a high off constantly putting himself in danger.

Cranston helps balance the circus act on screen by constantly displaying his prowess for portraying dual roles, much like he did season after season on “Breaking Bad”. The list of characters, real, fake, and the real ones portraying fake ones, is too long to list. So much of the movie, and the emotional core of it, shouldn’t rely on Cranston, but it does. In a better movie with a better script, Cranston would surely be looking at another Oscar nomination.

Not all the credit should go to Cranston though. Despite scriptural problems, director Brad Furman has a keen eye for how a crime movie should look. He also allows tense scenes to unfold naturally in an unsettling fashion. He also has some wonderful shots reminiscent of late 80’s and early 90’s mobster movies. But there’s really only so much he can do with the script by a first time writer tasked with condensing the fascinating, and probably lengthy, story of Mazur.

For those looking for a suspenseful time, they may get it with “The Infiltrator”. Just as long as they’re truly paying attention for all 127 minutes and bringing a notepad to keep tabs on everyone. One slip of attention on your end and you’ll miss a key point to the plot that’s brought up 30 minutes later. For that reason, “The Infiltrator” is a bizarre addition to the general popcorn summer blockbuster landscape. But if you’re wanting to watch Cranston raise the intellectual and suspense level of a movie nearly all on his own, “The Infiltrator” is your sure bet.