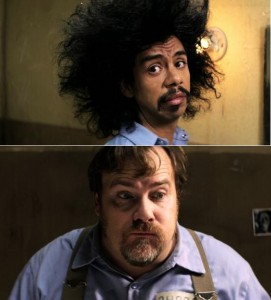 Hector Jimenez and Kevin Farley star in the upcoming film “Cellmates”, which was written and directed by Jesse Baget. Media Mikes had the chance to talk with both Kevin and Hector about the film and what it was like working with Tom Sizemore and Stacey Keach.

Adam Lawton: Can you tell us a little bit about the film?
Kevin Farley: It is a film about Leroy Lowe which is a character played by Tom Sizemore. Leroy grew up in the south during the 70’s and is a member of the Klu Klux Clan. Leroy ends up in prison with my character Bubba who also is a member of the clan. Over the course of the movie as Leroy becomes involved with Hector’s character Emilio he starts to have a change of heart.

AL: Can you each describe your characters in the film?
Hector Jimenez: I play the chatty Emilio Ortiz who ends up in jail after trying to start a migrant work riot.
KF: I play Bubba who is a lifelong member of the Klu Klux Clan. I first meet Tom in our prison cell and we are like brothers. Our characters get along really well.My character really likes potatoes and doesn’t mind being in jail. I am kind of a lethargic,simple guy.

AL: How did you both become attached to the project?
KF: I knew the script was going around and Jesse had me read for the role of Bubba. I guess he ended up liking what he saw.
HJ: The role of Emilio was one that was written specifically for me.

AL: What was it like working with Tom Sizemore and Stacy Keach?
HJ: It was a great experience working with such good actors. It was really great to just be able to watch them work. They are legends.
KF: I totally agree with that. For me it was such an honor just to be on set.

AL: Do you guys have any funny behind the scenes stories?
KF: (Laughs) everyone pretty much behaved. The scene where I choke on the potato, I have to say really hurt. Tom has a lot of great Hollywood stories. He would spend most of his down time telling all these different stories. I think he is actually coming out with a book which will have a bunch of things in there.

AL: Can you tell us what the release plans are for the film?
KF: The film is premiering in New York and Los Angeles on June 1st. Things are still being working out for further release plans.

AL: What other projects are you guys currently working on?

HJ: I am set to start shooting a film in Porte Vallarta.
KF: I am going to be starting work on a film starring Hayley Duff titled “A Love/Like Ours”. I also am going to be working on another film with Jesse Baget.