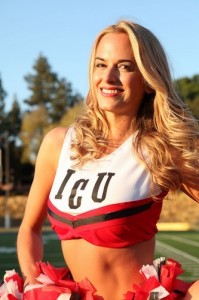 Jena Sims plays Cassi Stratford in the upcoming Roger Corman film “Attack of the 50ft Cheerleader”. Media Mikes had the chance to talk with Jena about the role and what it was like working with Roger.

Adam Lawton: How did you first get connected with Roger Corman?
Jena Sims: I auditioned for the film just like any other audition.  I really had no idea and was just treating this like another audition. The call was held in Roger’s office however he was not there at the time. I met with the director and casting associate and almost immediately booked the job.  They asked me if I had any cheerleading experience which I had as I did cheerleading throughout school. I didn’t get to meet Roger until about half way through filming. He has a brief cameo in one of the scenes. Roger was very sweet and quiet. He was just so nice. I was and still am very glad to be a part of one of his movies.

AL: Can you give us some background on the film?
JS: The film is a younger version of the classic film “Attack of the 50ft Woman”.  The story starts out with my character Cassi being the “ugly duckling”. She desperately wants to be a cheerleader and part of a sorority but because of her looks she can’t. One day while messing around in the science lab with her friend Cassi is injected with a serum that makes her beautiful but at the same time makes her grow.

AL: What drew you to the project?
JS: I grew up watching the “Bring It On” films. Those movies actually made me want to be a cheerleader. I loved that this film had a cheerleading element to it but also that it was a Roger Corman film. Roger has worked with so many great people and I wanted to be a part of that roster.

AL: How did working on this film compare to some of your previous work?
JS: It was like night and day. Being an independent film with a lower budget I think allowed everyone working on the film more creative freedom. Things were so much more relaxed and we all could contribute ideas for lines and or scenes. We all had a tremendous amount of input. I picked out and wore a number of my own clothes in the film. A lot of films the procedure is very tight and things are done in a certain way. Working on this Corman film was like going to summer camp. It really was just so much fun.

AL: Can you tell us about your involvement with HBBQ?
JS: HBBQ is a non-profit organization that I started. The letters actually stand for “Has Been Beauty Queen”. I started the organization in 2006 as a pageant for kids with terminal cancer called “Pageant of Hope”. I competed in pageants as a kid and was Miss Georgia Teen 2008. I lost my Grandfather when I was younger to cancer so I was always very interested in fund raising for places like the American Cancer Society. When kids come in to be a part of the pageant we teach the pageant walk and do their hair and makeup. We really try to get to know the kids and help bring them out of their shells. At the end of the day we have the pageant and everyone is a winner. With these pageants we try and help take the kids minds of being sick and in the hospital. I have been able to travel all around the world putting on these pageants and it’s been great.

AL: What other projects do you have coming up?
JS: I just shot a found footage film the other day which has still yet to be titled. It was a really fun and cute roll. I have auditioning quite a bit as all the fall shows are beginning production. I also will be doing a pageant for my organization in my home town in September so I am really looking forward to that. It’s been a long time since I have held one of these in my home town.