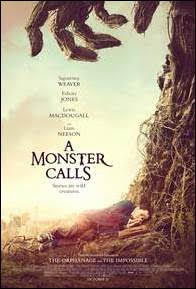 “A Monster Calls” is not a kid’s movie, although the trailer says otherwise and the studio probably wanted you to think differently when they greenlit it. There are moments that are too childish to entrance a teenage audience, but too dark and meaningful for a young one to fully grasp. I think the only people who would enjoy “A Monster Calls” are an adult crowd. Because when all is said and done, it takes a mature mind to recognize how beautiful and tragic it is.

The family members whispering amongst themselves is enough to give Conor O’Malley (MacDougall) a nightmare. Conor is viewed as a creative, but fragile adolescent, which makes those around him hesitate to state the obvious. His mom, Lizzie (Jones), has a terminal illness. The chemo isn’t working and the prognosis is bleak for the young mother. O’Malley’s father is out of the picture and his grandmother, played by Sigourney Weaver, is unable to handle the thought of having to bury her daughter. She’s more focused on getting custody of Conor and quickly settling other family affairs.

But Conor is suffering from a different kind of nightmare. Nightly in his dreams, he watches as the nearby cemetery, decrepit church and a twisted dead tree, collapse into the Earth. He screams as he sees his mother being swallowed along with the horrific mess. He clings to her as she’s about to fall into the unknown abyss that’s eating everything up. But before his nightmare reaches its crescendo, he awakes, sweaty and trembling. That’s when he’s greeted by a “monster”.

What conjures the deep throated tree monster, voiced by Liam Neeson, isn’t immediately clear and doesn’t become clear until the end. But what “A Monster Calls” does is provide something unique to the stereotypical coming-of-age movie. The voice of reason lies within the monster that spins fanciful ideas, speaks in vague riddles, and dishes out tales that seemingly relate to Conor’s growing predicaments.

The monster tells Conor that he will tell three stories and that by the end, he wants to hear one from Conor. Each tale doesn’t directly relate to a person or instance in Conor’s life, but each story weaved by the tree can be interpreted on multiple levels, possibly revealing its own secrets and truths to different viewers. The monster isn’t real, although there are plenty of moments to make you question that thesis.

It’s easy to see how a movie like this could have become a nightmare on its own accord. MacDougall, a somewhat fresh face to the movie scene, is given a lot of heavy lifting. While veterans and newcomers like Weaver and Jones are tasked with the adult response, MacDougall has a tougher task. He has to balance the conflict of teenage hormones clashing with a bitter reality. MacDougall handles the emotional cataclysm like a pro. This is a performance that could push him to stardom.

The script never becomes too sappy or attempts to emotionally manipulate the viewer, at least without a satisfying payoff. The visual style matches the fantasy book it’s based on, relying on real-life, CGI, and animation. The animation is a true standout with vibrant water colors that spill from scene to scene. Outside of its wonderfully distinct style, it’s a deep observation about the power of loss and the capacity of absolute truth. “A Monster Calls” is a soulful metaphor for anyone who’s old enough and open enough to feel, think and grow.