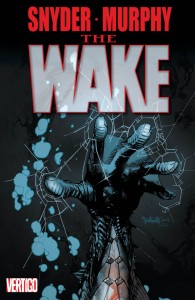 Now that we’ve addressed the big guns, it’s time to talk about what’s really going down in comics. Having owned, worked, and frequented comic shops for the better part of my life, I’ve seen a definite cycle in comics. The big guns get hot, coast for a while, turn to naught, rest on their laurels for a bit and then finally get their heads back outta their comfortable ostrich holes (some of which are in the southern regions of the anatomy) and get hot again. Independent comics, however, seem to remain fairly constant but only seem to get our attention when the big guns are misfiring. Funny enough, most of the times they get back on their hot tracks is when they farm the independents. When I was a kid in high school, I was enthralled with the indies, books like “Alien Legion,” “Badger,” “Violent Messiahs” and such. I’ll never forget the one that truly got me hooked on indies: “The Crow.” I find it to be amazing, intense, breathtaking and probably the best love story ever written.

Today, the same thing is happening. As the big guns wane, the independents are hitting with full force!

I suppose we should give the Vertigo line at least a nod, even though it is technically a DC project. It has always been their ‘indie’ side, propelled by Sandman. Currently they have a couple sweet things available. Coffin Hill is the sweet story of a backwoods family of witches and a daughter’s return to her truly haunted past after being a cop and an FBI agent. The art is stunning and the story is fun. Royals: Masters of War is an intriguing look into the royal families of the world (specifically during WW2) possessing super powers but still demanding the ‘peasants’ still fight their wars. One of them has rejected this idea and is now fighting alongside the ‘peasants’ and none of the super-powered royal families are very happy about that. Read the comic to find out the rest. Perhaps the sweetest of sweet that Vertigo has to offer currently is The Wake. Written by now famous Scott Snyder and brilliantly illustrated by Sean Murphy, one of the sleekest and most original artists out there, The Wake is a killer sci-fi/horror-thriller that grabs you by the gonads and propels you through a water-based monster adventure that makes “Jaws” look like “Spongebob Squarepants.”

Another leader in indies is Dark Horse. While they admittedly have done some fun things with licensed properties, like “Star Wars” and “Serenity,” the only original stuff they’ve come out with that’s really grabbed me are rehashed properties of earlier released titles: Ghost & X. Of the two, X is definitely superior, following the exploits of the underworld enforcer gone anti-hero, X, as he ‘cleans up’ Arcadia in his best Quentin Tarantino over-the-top violence kind of way.

One of my favorite indie companies is Avatar. They’ve collected some of the best writers of our time, including Garth Ennis, Warren Ellis, Kieron Gillen and Jonathan Hickman, and combined them with some of the most “in your face” brutal macabre artists around to create things of wonderment and beauty. The two that really stand forward above the others are Ennis’ Rover Red Charlie & Gillen’s Uber. Rover Red Charlie is one of the most unique end of the world scenarios I’ve seen, from the perspective of three dogs that pal around & can’t understand what happened to all the ‘feeders’ and why they’ve gone crazy. Their adventures lead them out of the city into a world they never even knew existed. I don’t know how he did it, but Ennis managed to make a most macabre and disturbing story into something also cute and fluffy…can’t get much more original than that. Gillen’s Uber is a killer version of the WW2 arms race using super-powered individuals as the weapons. Started by Nazis, the other countries counter with their own super-powers and what ensues is just what you would think, mass, mass killing and wanton destruction…and what about the casualties?

Join us next time as we finish off with the Kings of the indie comics, Valiant and Image.

Bear Wolf owns and operates the New Game in Town shops in DeKalb and Dixon, Illinois.