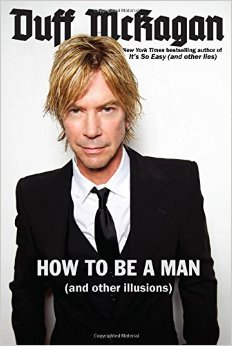 “How to Be a Man (and other illusions)”
Author: Duff McKagan
Hardcover: 304 pages
Publisher: Da Capo Press

“How to Be a Man” is the follow-up to bassist Duff McKagan’s critically acclaimed New York Times bestselling memoir “It’s So Easy: (and other lies). From his time with Gun’s N’ Roses and Velvet Revolver, to getting sober Duff shares the wisdom he learned while on the road to superstardom.

Told through a series of brief chapters all of which carry humorous titles “How to Be a Man (and other illusions)” documents Duff’s past trials and tribulations while on his way up through the various steps of stardom. From getting sober to raising a family no topic is off limits as McKagan speaks candidly about his experiences while passively attempting to teach the reader a thing or two about the sometimes not so glamorous life on the road. Amidst the scattered life lessons Duff shares little know facts about some of the biggest music stars in the industry to which Duff has the privy of calling friends. We learn about Gene Simmons hidden dance skills, Jane’s Addiction front-man Perry Ferrell’s knack for NFL history along with Duff’s accounts of reuniting recently with Axl Rose to perform a number of shows with Guns N’ Roses while the band was in South America.

Though some of the chapters in the book seemed a bit dry and tended to drone on there was still something about this book that pulled me back in page after page. Duff clearly has lived the rock-star life and those were certainly the elements that stood out for me. I understand Duff not wanting to tell the same old stories that were documented in his first book however those types of stories are what I feel capture the reader’s attention more so than the importance of using sun block while in South America. All in all a fun and quick read that fan’s of Duff and his music will surely enjoy. 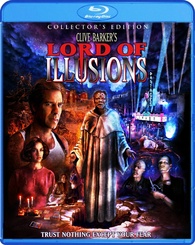 Dating back to 1995, I remember when I saw that Clive Barker had a new film coming out and just new I had to see it. At the time, I was already in love with his work like “Nightbreed” and “Hellraiser”. “Lord of Illusions” shortly became no different. This film was a nice mix of noir, sci-fi and horror. Plus honestly, who doesn’t love Sam Beckett himself, Scott Bakula kicking ass and taking names. Scream Factory, thankfully, is behind this release and they are pulling out all the cards here. They have not only one but two cuts of the film. Disc one is the Theatrical Cut of the film, while disc two feayures an all NEW high definition transfer of Clive Barker’s Director’s Cut of the film making this a must own for any fan of the film.

Official Premise: From best-selling author and celebrated director Clive Barker comes a supernatural thriller that rips apart the boundaries between sanity and madness, and between the art of illusion and the terrifying forces of magic. Scott Bakula “(“Quantum Leap”) portrays Harry D’Amour, a private detective visiting Los Angeles on a routine investigation. Harry gets more than he bargains for when he encounters Philip Swan (Kevin J. O Connor, “The Mummy”), a performer whose amazing illusions captivate the world. But are they really illusions? Harry isn’t so sure as he is thrust into a nightmare of murder, deception and terrifying assaults from the dark beyond. Famke Janssen (“X-Men”, “Hemlock Grove”) and Daniel von Bargen (“Super Troopers”) also star.

This Collector’s Edition release features a solid Blu-ray presentation. The 1080p transfer looks great, especially on the director’s cut. The DTS-HD Master Audio track also works perfectly with the amazing score. The special features are great as well. There is a commentary track from director Clive Barker. There is a featurette “A Gathering of Magic”, which includes original behind the scenes footage. There is more unseen and rare behind the scenes footage into “Illusion of Reality”, which includes vintage interviews looking into the making of the film. There is a NEW interview with Storyboard Artist Martin Mercer, which is a must watch. Lastly there are some deleted scenes with Clive Barker giving commentary and also a Photo Gallery.