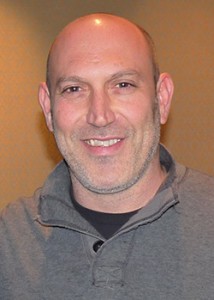 Mike Gencarelli: Tell us where “Universal Soldier: Day of Reckoning” fits in the franchise?
John Hyams: When I first became involved with the Universal Soldier franchise in 2009 (with Regeneration) the idea was to focus on the broad mythological themes while ignoring specific storylines from the previous films. Although it was an action movie, I immediately responded to the Frankenstein myth elements, which kept one foot firmly planted in the sci-fi and horror genres. I felt that a movie made 20 years after its predecessors should be a stand alone film, while at the same time pay respect to the mythology of the first movie. With Day of Reckoning, the idea was to embrace the very same challenge – to make a movie that picked up where Regeneration left off, from a mythological standpoint, but could also stand alone as a unique interpretation of the material. This time we focused more on the psychological horror elements. We aimed to create a subjective, often hallucinatory experience, punctuated by moments of explosive action and violence. So, to me it fits right next to Regeneration, where they both can stand together or alone.

MG: Tell us about working with and also reuniting Dolph Lundgren and Jean-Claude Van Damme?
JH: Regeneration served as a more formal reuniting of Dolph and Jean-Claude, since that movie pitted the two against each other, and allowed for a dramatic showdown more reminiscent of the scenario from the first movie. This time, their characters served a different function – as obstacles standing in between our protagonist, played by Scott Adkins, and his goals. As for working with them, I know them better this time around and we have a comfortable working relationship. I like them both as people and collaborators, but they’re very different from each other and present unique challenges. Jean Claude is emotional and leads with his heart, whereas Dolph is more analytical, and thinks in more technical terms. We all had a good time working on this one.

MG: What made take on the role of writer, as well, this time around?
JH: It’s always better to be involved with a story from the ground up. By coming up with the story and writing the script I could take part in the evolution of the mythology, and take it into directions I’d like to see it go. Ultimately, it leads to a much more interesting, challenging experience.

MG: After four films in the franchise, tell us about turning the hero Luc Deveraux into the villain?
JH: Regeneration ended with Luc Deveraux escaping. Day of Reckoning answers the question of what happened to him after he escaped. In order to facilitate this story, it was necessary that we introduce a new protagonist, whose journey was to find Luc Deveraux and, in this case, attempt to kill him. Therefore, Luc is the antagonist of the story… however, whether or not he is actually the villain is the central idea the film seeks to explore.

MG: Tell us about the decision to shoot “Universal Soldier: Day of Reckoning” in 3D and was it a challenge?
JH: It wasn’t my decision to shoot in 3D, the producers sold it that way oversees, so it was part of the deal. 3D is a huge challenge because, quite simply, it costs more money and takes longer. So, on a budget as low as ours, it leaves you with less shooting days and less hours each day to work with. Therefore, the fact that it was going to be shot in 3D directly affected the content of the story. In essence, the decision to focus on subjective, horror thriller elements instead of large scale spectacle was informed by our budgetary constraints, due in large part to working in 3D. From an aesthetic standpoint, we used 3D to create an immersive environment. Since the perspective of the movie is very subjective, we felt that 3D could help enhance that feeling of being in the room with the characters while they interact. Conversely, we avoided the ‘comin-at-ya’ gimmickry often associated with 3D. The goal was to make the film work just as well in 2D as 3D.

MG: With 2012 being 20 years from the first film, how do you feel this franchise has evolved?
JH: I feel like the first Universal Soldier film was a product of its time, when movies like Terminator and Robocop had inspired an interest in bio-mechanical ideas. That coupled with the tongue in cheek nature of action movies from the 80s and early 90s, led to an aesthetic that was very much of its time. It did not take itself too seriously, and, in fact, embraced the comedic aspects of the story. For Regeneration and Day of Reckoning I took my cues from films like Alien, Sorcerer, The Terminator, as well as films by John Carpenter, David Cronenberg, among others, to create an aesthetic that took the mythology seriously, and tried to create a believable aesthetic. That idea led to the dark, serious tone that ended up dominating the proceedings.

MG: How was it getting to bring this series back to theaters after going DTV?
JH: I feel a sense of accomplishment that we took a franchise that had long been forgotten and reintroduced it in a way that created renewed interest. From the discussions I’ve had with people, whether during interviews, film festivals or on Facebook, there seems to be an appreciative audience out there that Is pleased with the direction we’ve taken things.

MG: Now that you have life back to “Universal Soldier”, do you see yourself continuing with this franchise?
JH: I have been developing a concept with the producers that we imagine as a larger scale production. If we are able to raise the budget necessary to execute these ideas, than I’d be interested.

MG: Can’t wait to see what you have planned next, any ideas?
JH: In addition to Universal Soldier, I’m developing a potential action franchise with a renowned sci-fi writer, as well as finishing an original screenplay of my own. Other than that, reading scripts and meeting with producers. Truth be told, I’m itching to get back in the trenches. When I’m not making a movie I feel like Captain Willard — drunk, naked and bleeding in a Saigon hotel room, just waiting for a mission.