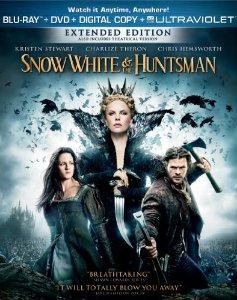 When I think of “Snow White and the Huntsman”, I can’t help but compare to “Twilight”, sorry Kristen Stewart. The film is a bit overly ambitious and a little slow moving but it really takes a unique view to the classic story. The visuals are very stunning and really drives the story. If you are going to compare this to the piece-of-crap “Mirror, Mirror”, there is no contest, this one is a real winner. This Blu-ray release includes both the 127-minute theatrical cut and a 131-minute extended edition. The extended version doesn’t make or break the film itself but it does deliver a few decent new scenes. Overall I just loved the dark tone of the film. Looking forward to the Huntsman spin-off with Chris Hemsworth and did I mention that Charlize Theron was absolutely awesome in this role!

The release comes as a two-disc combo pack. There is a Blu-ray disc, as well as a DVD disc. There is also two options for digital copy including an iTunes download or the UltraViolet digital streaming copy. The latter is definitely the route I will be going for sure. The 1080pd video transfer is just simply stunning and really adds so much to the film’s aesthetics, cinematography and visual effects. The real star of the film though is the DTS-HD Master Audio 7.1 surround track. This track literally rumbled my walls in my house and really uses the 7.1 sound to the max.

Like the film, the special features are great and really deliver. There is an audio commentary: Director Rupert Sanders, visual effects supervisor Cedric Nicolas-Troyan and co-editor Neil Smith, which is very heavy on details and focused on production. There is a U-Control, Picture in Picture included with sporadic behind-the-scenes footage and interviews. “Second Screen Experience” allow you to interactive in the film with your tablet or PC using the pocket BLU app. “Around the Kingdom: 360° Set Tour” is a beautiful look at the film’s Pinewood Studios sets. “A New Legend is Born” includes cast/crew interviews as they discuss the film production and the history behind the story. “Reinventing the Fairy Tale” looks at the incorporation of the Brothers Grimm version of Snow White. “Citizens of the Kingdom” included four typical EPK-style character featurettes including “Fairest of Them All: Snow White,” “Deliciously Evil: Queen Ravenna,” “The Huntsman” and “Motley Crew: The Dwarves.” Lastly, and my favorite, “The Magic of Snow White and the Huntsman” looks into the film’s visual effects and animatics in a lot of detail. 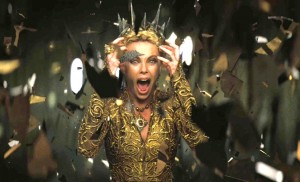 Some fairy tales are best left alone. In doing some quick research I learned that there are no less than thirty filmed versions of the tale of Snow White. And I’m willing to bet that all of them (well, maybe not the X-rated version entitled “Once Upon A Girl”) are better than “Snow White and the Huntsman.”

As the film begins we are told, via narration, the story of a happy couple that wanted a happy baby. The missus pricks her finger on a rose and three drops of blood escape. Apparently the drops of blood signify red lips, black hair and white skin. Turns out the couple in question are actually the king and queen of a happy kingdom. The queen has a beautiful baby girl, who they name Snow White. And they live happily ever after. Just kidding!

I hardly know where to begin.

Apparently when the film was cast the actors were told that they either needed to speak like “this” or like “THIS!” Both the evil queen (Theron) and the fair Snow White (Stewart) either mumble their lines to their fellow actors or SCREAM them! As the magic mirror-loving, bird heart-eating queen who has apparently been done wrong by one man too many, Theron comes off as a better dressed version of Aileen Wuornos, the man-hating serial killer she won an Oscar portraying in 2003’s “Monster.” Her makeup makes her features fluctuate from a blindingly beautiful queen to a weathered hag who eerily resembles Courtney Love’s Althea Flynt at the end of “The People vs Larry Flynt.”
The queen also has a creepy relationship with her brother, Finn (Sam Spruell). And by creepy I mean “Angelina Jolie and her brother at the 2000 Oscars” creepy.

As Snow White, Stewart doesn’t have much to do while she’s locked in a tower. Once she escapes she proves herself to be quite feisty. However, she too is a shouter. And then there’s Hemsworth, who apparently was the only actor that was trying when the film was shot. Burdened with the only accent in the film, the kind that makes the word “three” sound like “tree,” and wielding a large axe much like he wielded his Hammer as Thor, Hemsworth gives the only layered performance in the film. Even the seven dwarves, played by who’s who of British actors including Ian McShane, Bob Hoskins and Nick Frost, couldn’t bring this film to life. It’s like everybody on set, sans Hemsworth, took a bite of the famed poisoned apple and drifted off to sleep. And since these aren’t Disney’s dwarves they’re saddled with such un-cute names like Beith, Nion and Gort. One of them bore a striking resemblance to Mel Brooks’ Yogurt in “Spaceballs,” but since he’s apparently blind I just call him “Blindy,” in memory of Walt.

The pacing is horrible, making a two hour-plus film feel EXACTLY LIKE a two hour-plus film. The script is cobbled together from pretty much every different version of the Snow White tale you remember from your childhood. Somebody better call John Lee Hancock, who wrote such films as “The Blind Side” and “Midnight in the Garden of Good and Evil,” and tell him somebody added his name to the other two taking credit for the screenplay. Thankfully I have to watch “A Perfect World” this weekend so I can be reminded of what a talented writer he truly is. On the plus side, the musical score by James Newton Howard is a pleasant distraction from the action on screen.

Thanks to my crack research I’ve learned that two of the actors featured in “Once Upon a Girl” were Hal Smith, who played the loveable town drunk Otis on “The Andy Griffith Show,” and Frank Welker, one of the best voice-over actors EVER. Armed with that knowledge I think “Once Upon a Girl” may also be better than “Snow White and the Huntsman.” 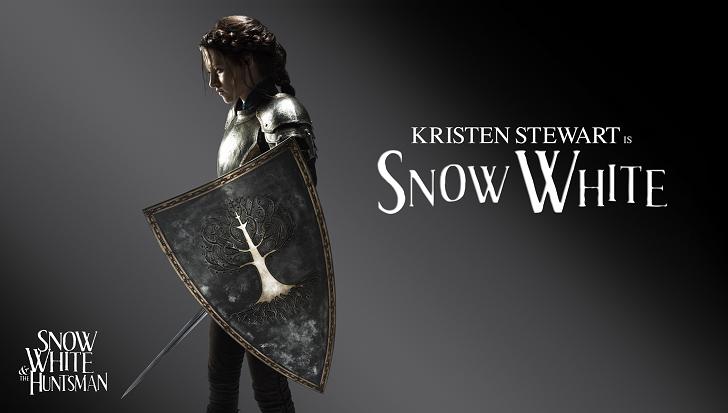 Universal Pictures released a first look at “Snow White and the Huntsman” Characters from Comic-Con 2011!  The films stars Kristen Stewart, Charlize Theron, Chris Hemsworth, Sam Claflin and will be released on June 1, 2012

In the epic action-adventure Snow White and the Huntsman, Kristen Stewart (Twilight) plays the only person in the land fairer than the evil queen (Oscar® winner Charlize Theron) who is out to destroy her.  But what the wicked ruler never imagined is that the young woman threatening her reign has been training in the art of war with a huntsman (Chris Hemsworth, Thor) who was dispatched to kill her.  Sam Claflin (Pirates of the Caribbean: On Stranger Tides) joins the cast as the prince long enchanted by Snow White’s beauty and power.

The breathtaking new vision of the legendary tale is from Joe Roth, the producer of Alice in Wonderland, producer Sam Mercer (The Sixth Sense) and acclaimed commercial director and state-of-the-art visualist Rupert Sanders.