This Halloween, Treat Yourself to the Spooky, Action-Packed
Animated Feature-Length Film
Marvel’s HULK: WHERE MONSTERS DWELL
Hulk, Dr. Strange and the Howling Commandoes join forces to defeat Nightmare in this action-packed, feature-length film premiering Oct. 21 on Digital HD!
SYNOPSIS: This All Hallows’ Eve, Nightmare is bent on conquering our waking world by crossing through the Dream Dimension, and converting each dreamer into a monster. Can Dr. Strange, Hulk and the Howling Commandoes hold the line and put an end to his nefarious scheme?
“Marvel’s Hulk: Where Monsters Dwell,” the first animated, feature-length film centered on Hulk, premieres on Digital HD on Oct. 21.  In this spooky, action-packed feature, the Green Goliath and Sorcerer Supreme team up with the Howling Commandoes, a supernatural strikeforce, to thwart the villainous plan of Nightmare, the evil, supernatural lord of the Dream Dimension.
VOICE CAST: Fred Tatasciore as Hulk; Liam O’Brien as Dr. Strange; Jesse Burch as Bruce Banner; Edward Bosco as Warwolf and Minotaur; Chiara Zanni as Nina Price, Vampire by Night; Mike Vaughn as Zombie Jasper Sitwell; Matthew Waterson as Nightmare; and Michael Robles as Benito
WRITERS: Marty Isenberg (“Marvel’s Guardians of the Galaxy,” “Marvel’s Ultimate Spider-Man,” “Ben 10”), Dave McDermott (“Marvel’s Guardians of the Galaxy,” “X-Men: The Animated Series”)
EXECUTIVE PRODUCERS: Alan Fine, Dan Buckley, Joe Quesada, Jeph Loeb, and Cort Lane
RELEASE DATE: Oct. 21, 2016
RELEASE FORMATS: Digital HD/SD & On-Demand
FEATURE RUN TIME: 70-75 min.
ASPECT RATIO: 1.78:1
AUDIO: Dolby Digital 5.1
LANGUAGES/SUBTITLES: English
SOCIAL MEDIA: Facebook: Facebook.com/Marvel
Website: Marvel.com
Twitter: Twitter.com/Marvel
Instagram: Instagram.com/Marvel
ABOUT MARVEL ENTERTAINMENT AND MARVEL TELEVISION:
Marvel Entertainment, LLC, a wholly-owned subsidiary of The Walt Disney Company, is one of the world’s most prominent character-based entertainment companies, built on a proven library of more than 8,000 characters featured in a variety of media over seventy-five years.  Marvel utilizes its character franchises in entertainment, licensing and publishing.
Marvel Television develops and produces some of the world’s most creative and popular live-action and animated programming for broadcast and cable television networks plus digital platforms including a historic deal with NETFLIX. Its portfolio of self-produced series include Marvel’s Agents of S.H.I.E.L.D. for ABC, Marvel’s Daredevil, the Emmy and Peabody Award-winning Marvel’s Jessica Jones, and Marvel’s Luke Cage for NETFLIX and Marvel’s Ultimate Spider-Man, Marvel’s Avengers and Marvel’s Guardians of the Galaxy for Disney XD. Marvel Television’s upcoming projects include Marvel’s Iron Fist and the culminating Marvel’s The Defenders for NETFLIX as well as Marvel’s The Punisher (NETFLIX), Marvel’s Cloak & Dagger (Freeform)and Legion (FX). For more information, visit marvel.com.  © 2016 MARVEL
ABOUT THE WALT DISNEY STUDIOS:
For over 90 years, The Walt Disney Studios has been the foundation on which The Walt Disney Company was built. Today, the Studio brings quality movies, music and stage plays to consumers throughout the world. Feature films are released under the following banners: Disney, including Walt Disney Animation Studios and Pixar Animation Studios; Disneynature; Marvel Studios; Lucasfilm; and Touchstone Pictures. The Disney Music Group encompasses the Walt Disney Records and Hollywood Records labels, as well as Disney Music Publishing. The Disney Theatrical Group produces and licenses live events, including Disney on Broadway, Disney On Ice and Disney Live!.
Read Complete Article
Filed Under: Film Headlines Tagged With: 21, digital, dwell, hd, hulk, marvels, ... 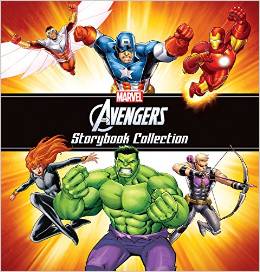 I wish I had a book like this when I was a kid. “The Avengers Storybook Collection” is a must have for any parent with young boys or even young fan girls for that matter! There is nothing like getting ready a story filled with heroism, adventure and action just before going to slip. These stories are fun, exciting and feature some of our favorite Marvel superheroes. Even though, my daughter is a little young for this one, she still loves it and already came name every character on the cover!

Official Premise: Thor, Iron Man, Captain America, Hulk, Black Widow, Hawkeye, and Falcon are Earth’s Mightiest Marvels-the Avengers! Join them as they work together to battle against sinister Super Villains such as Ultron, Thanos, the Masters of Evil,and more, to keep the Earth safe. Featuring 20 explosive stories of good vs. evil. Avengers assemble!

Let’s hope that this Storybook Collection is the first of many. There are literally an infinite collection of characters that they can include in future collections. This one has 20 stories included with all of the favorites like Iron Man and Captain America but I would love to be able to introduce my daughter to some of the lesser known characters as well. They could even do a female superhero only book OOHHHH OOHHHH or even better a villains only book. Who wouldn’t want to read a new story featuring everyone’s favorite Avenger villain, Loki! Fingers crossed! 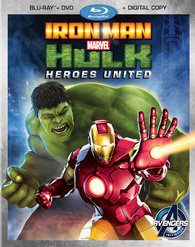 After “The Avengers”, Marvel superheros have never been in higher demand! And who doesn’t love a great team up. Iron Man is obviously everyone’s favorite character and Hulk was the fan-favorite from “The Avengers”. This brand new animated film makes cinematic history and teams these two unexpected heroes together. The film is pretty jam-packed with action and great humor, which is a must for these two characters. Adrian Pasdar (“Heroes”) returns to voice Iron Man/Tony Stark and as does Fred Tatasciore (“Hulk and the Agents of S.M.A.S.H.”) for the Hulk and wrapping it up Dee Bradley Baker (“Star Wars: The clone Wars”) introduces and gives a voice to our new villain Zzzax. Now that Disney owns the Marvel brand, I hope that we are going to be seeing many more of these in the coming months! Recommend for any Marvel fan…young or old.

Official Premise: In this action-packed teamup, the Invincible Iron Man and the Incredible Hulk come together to save the Earth from its greatest threat yet. When two HYDRA scientists try to supercharge a Stark Arc Reactor with Hulk’s Gamma Energy, they unleash a being of pure electricity called the Zzzax, and he’s hungry for destruction. Together, Iron Man and Hulk are the only force that stands in the way of the Zzzax’s planetary blackout. But first the superhero duo will have to get through snarling Wendigos, deadly robots and the scaly powerhouse, Abomination. Can two of Marvel’s mightiest heroes find a way to work together without smashing each other before time runs out?

“Iron Man & Hulk: Heroes United” comes packaged as a combo pack with a Blu-ray + DVD + Ultraviolet Digital Copy. Disney/Marvel has been using Digital Copy Plus now, which is a real treat! The 1080p transfer works wonderfully with the animation, which is quite sharp and very colorful. You can see the difference between the usual TV style animation and the quality feature film animation. There is a lot of detail but into making this look great. The DTS-HD Master Audio 5.1 also delivers a huge HULK SMASH to your surround sound systems. It works very well with the non-stop action and sound effects as well.

In terms of special features, they are not outstanding but still cool and worth checking out. Firstly we get “Marvel Mash-ups”, which are three super cool shorts from old Marvel cartoons with new voice actors overdub scenes. Note, though if you pause the film you get “Marvel Inter-missions”, which includes even more hidden ones. The only other bonus feature is a chat between Marvel’s Chief Creative Officer Joe Quesada and Ryan Penagos (Agent M on Twitter) about Iron Man and Hulk’s history together and other things Marvel. Definitely worth checking out also. No question, this will make a great gift this holiday season!