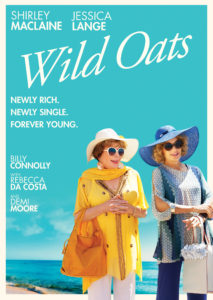 A fun romp with a great cast, “Wild Oats” tells the story of recently widowed Eva (MacLaine) and her best friend Maddie (Lange). After Eva’s husband dies she receives his life insurance payment. However, instead of the expected $50,000.00 the check is mistakenly made out for $5 million. What to do? Most people would return the check. Eva cashes it and she and Maddie embark on a vacation adventure that draws the attention of the media and, of course, the insurance company.

I always read that there aren’t any good roles written for older actresses, but Eva and Maddie are well written and well developed characters. It helps that they are played by two formidable former Oscar winners who exhibit more energy in their performances than actresses 50 years their junior. The supporting cast is equally strong, including Demi Moore as Eva’s daughter, Billy Connolly as Eva’s suitor, Rebecca Da Costa and Judd Hirsch. And Hesseman almost steals the film as the exasperated insurance company agent sent to retrieve their money. And an added bonus here for fans of the television show “Head of the Class,” a program in which Connolly replaced Hesseman.

A small film with big laughs, “Wild Oats” is one you should look for next time you’re at the video store.