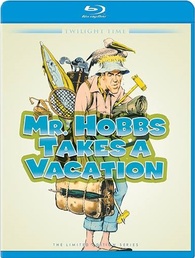 Who doesn’t love Jimmy Stewart? The 60’s were an interesting transition for the Hollywood legend. “Mr. Hobbs Takes a Vacation” was released in 1962 and is a fun and slightly dark family comedy. It was directed and written by a pair of Hollywood veterans, Henry Koster and Nunnally Johnson. It co-stars the always gorgeous and very talent Maureen O’Hara. Stewart fans are going to want to check this out for yet another gem from Twilight Time.

Official Premise: The apparently light-hearted comedy, Mr. Hobbs Takes a Vacation (1962), reveals an intriguing darker side in its tale of a family get-together gone awry. Little kids are monstrous, older kids suffer from self-esteem problems, grown-up kids have marital difficulties of distressingly diverse natures—and all are presided over by a decidedly grumpy (if great) James Stewart, waging the familial wars with a more idealistic helpmate (Maureen O’Hara) at his side.

This Blu-ray release is an Screen Archives Entertainment Exclusive and is a Limited Edition release with only 3000 copies produced. The Blu-ray looks suprising with its 1080p transfer in 2.35:1, especially for a film that is over 50 years old. The only thing that age has really effective is the color of the film, it doesn’t feel quite that sharp as it should or was in the past. The DTS-HD Master Audio Mono tracks woks well for this dialogue driven comedy, also the score by Henry Mancini is amazing.

In terms of special features, there is not a lot here to impress you. There is a very short set visit called “Movietone Movie Lot” and also the original theatrical trailer. But the main extra is really the Isolated Score Track, which is delivered in DTS-HD Master Audio 2.0. This score has been often overlooked and it is a shame because watching this track, I realized how much I actually love it. Henry Mancini is an amazing composer.  So score fans will enjoy, otherwise not much else here.