It worked in the movie!” When an army drum is breached and a mysterious chemical gas is released into a nearby cemetery, the dead return to life with only one thing on their minds…brains! The zombie menace quickly descends upon a group of misfits who must fight for survival as they are picked off one at a time by a horde of the undead. “Do you ever wonder about all the different ways of dying?” Dan O’Bannon’s outrageous splatter classic “The Return of the Living Dead” has continued to terrify and entertain horror fans for over twenty-five years with its delicious mix of blood, guts, sex and punk. Boasting off-beat humor, plenty of attitude and one of the most famous zombies ever committed to celluloid, it’s easy to see why the film’s legacy continues to grow. “It makes the pain go away…” MORE BRAINS! A RETURN TO THE LIVING DEAD is the ultimate account of the tongue-in-cheek, stylish and apocalyptic zombie movie. It features — for the first time ever! — contributions from all the main cast as well as clips, photographs, storyboards, conceptual art, publicity materials, archival documents and behind-the-scenes footage. “They’re back from the grave and ready to party!” Through this definitive retrospective fans are finally able to explore the film’s journey from the world of “Night of the Living Dead” to the mind of acclaimed writer/director Dan O’Bannon. Narrator Brian Peck (“Scuz”) guides you through the blood, sweat and tears as cast and crew look back on their experience in the graveyard creating the film that’s been called “a beauty of a cult classic!” 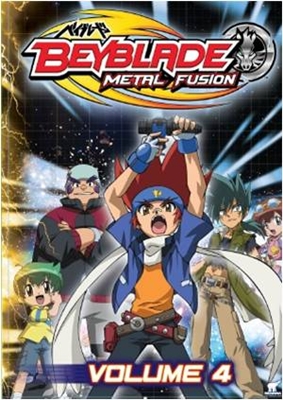 FEARLESS HEROES FACE THE POWERS OF DARKNESS IN THE EXCITING, ONGOING SAGA

DVD includes EXCLUSIVE CODE to unlock special features, including the
ability to battle other Beybladers on Beybladebattles.com

UNIVERSAL CITY, CA – Only the brave stand between the world and the forces of true evil in BEYBLADE: Metal Fusion Vol. 4, spinning onto DVD August 23 from Nelvana Enterprises and Vivendi Entertainment. From Nelvana and d-rights Inc., BEYBLADE: Metal Fusion chronicles the epic battle with the Dark Nebula in a fresh take on the original hit BEYBLADE. Only Gingka, the courageous hero with an in-depth knowledge of the Beyblade, and his loyal friends can prevent sinister forces from conquering their world.

BEYBLADE: Metal Fusion continues to grow in popularity, having already spawned a successful toy line from Hasbro and an action-packed video game for the Nintendo DS™ and Wii™. The new season of the popular series will debut this year on Cartoon Network, along with new toys from Hasbro and a new videogame.

The BEYBLADE: Metal Fusion Vol. 4 DVD includes an exclusive code unlocking special features, including the ability to battle other Beybladers on Beybladebattles.com. The DVD will be available for the suggested retail price of $14.97.

Synopsis:
The battle between good and evil is even more intense and dangerous than ever as Gingka and his friends face a villain with a plot to unleash a long forbidden Beyblade in his quest to take over the world.