Clive Barker is an English playwright, novelist, film director, and visual artist. Barker came to prominence in the mid-1980s with a series of short stories, the Books of Blood, which established him as a leading horror writer. He has since written many novels and other works, and his fiction has been adapted into films, notably the Hellraiser and Candyman series.

On October 7th, 2020, Hulu is premiering the new horror anthology film, BOOKS OF BLOOD, which takes audiences on a journey into uncharted and forbidden territory through three uncanny tales tangled in space and time.

Media Mikes had a chance to chat with Clive about the new movie and how 2021 will be the year of Clive Barker with his upcoming books and the new Candyman film being released. 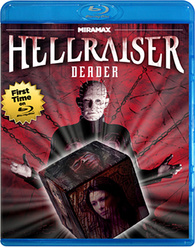 When it comes to the “Hellraiser” series, I have always been a fan. The films were not always amazing but still great horror fun. Doug Bradley is amazing in the role of Pinhead. “Hellraiser: Deader” is the seventh film in the series and this is the first time that it has ever been released on Blu-ray, thanks to Echo Bridge. They have also previously released “Hellraiser: Bloodline”, “Hellraiser: Inferno”, “Hellraiser: Hellseeker” and “Hellraiser: Hellworld”, which is the 4th, 5th, 6th and 8th films in the series. I am assuming that now that “Deader” has finally be released, that Echo Bridge would be planning another multi-feature Blu-ray with all the films. They also own the rights to the third film “Hellraiser III: Hell on Earth”, where is that Blu-ray release? Nonetheless for $5 bucks, this is easily worth the purchase and a fantastic upgrade from your previous Blu-ray. One of the best releases, that I have seen from Echo Bridge in recent months.

Official Premise: Amy Klein (Kari Wuhrer) is a tough-as-nails reporter working for an underground newspaper. But when Amy’s job leads her to a mysterious cult and the evil Pinhead, any moment could be her last. The thrilling villain you love to fear delivers another hellish nightmare you’ll never forget.

Echo Bridge really gave some love to this release. The 1080p transfer looks quite impressive.  The film is very dark itself but it looks clear and the colors are solid.  The DTS-HD MA 5.1 surround soundtrack works very well with the moments of horror.  It also compliments Heinrich Lohner score, who samples the original “Hellraiser” score by Christopher Young. Echo Bridge has also included a DTS-HD MA 2.0  track but I do not see anyone choosing it, since the 5.1 is much better.

There are some great extras included here and are only missing the commentaries tracks and the short film called “No More Souls”, even though it is listed on the box, from the 2005 DVD release. There is a “Behind the Visual Effects”, which is a chat with Visual effects supervisor Jamison Goei.  There are over 25 minutes of Deleted and Extended Scenes. There is a short Gag Reel, which is great just to see Doug Bradley as Pinhead and go out of character. “Location Scouting” is a making-of featurette on how and where the film was shot. “Making of Hellraiser” is another great behind-the-scenes look with director Bota and star Wuhrer. “Practical Effects with Gary Tuncliffe” is a chat into creating Pinhead’s chains. Lastly there are some Storyboard Comparisons ncluded.