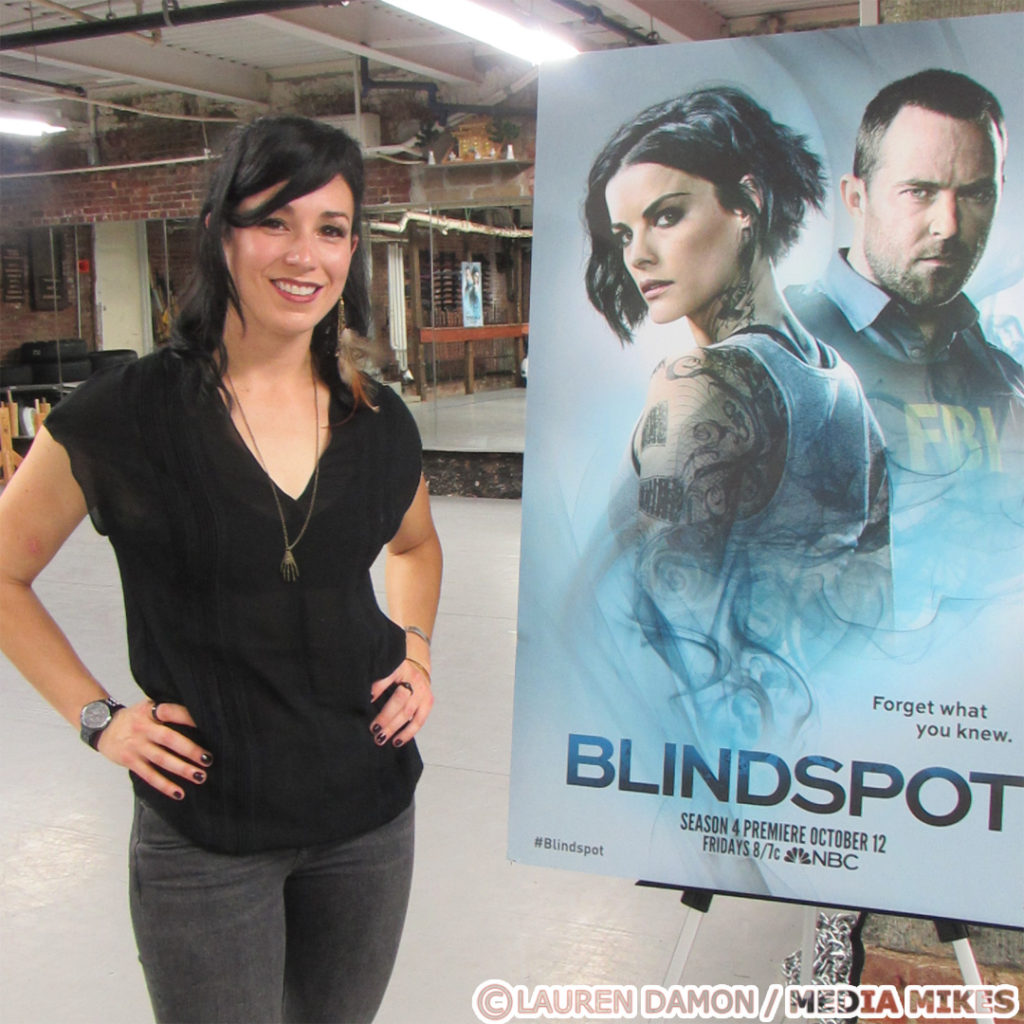 When Blindspot enters its fourth season this Friday on NBC, it will of course be bringing the action that has garnered the series multiple Emmy nominations for Outstanding Stunt Coordination. While last year burst onto the scene with, amongst other things, Jane Doe and Co in a tank, this year’s premiere has taken Jane (Jaimie Alexander) to Tokyo where she engages in some impressive swordplay with a new adversary. Behind Jane’s hardest hits is Alexander’s stunt double, Heidi Schnappauf, who has been with the show from the first season. Speaking with me at New York Comic Con*, Jaimie Alexander said of Heidi: “Just the hits she takes, the body slams…I don’t know how she’s OK. Half the time I’m terrified for her because she does a lot of the heavy lifting in the fights…And she’s just incredible, she’s an incredible lady.”

Besides Blindspot Schnappauf has an impressive credits list that includes Marvel’s Jessica Jones, Broad City and Orange is the New Black. I was lucky enough to speak with Heidi about her action-packed job this past weekend when Warner Brothers sent us along with her and Jaimie to, fittingly, a beginner Kendo sword lesson!

Lauren Damon: How long have you been with the show?

Heidi Schnappauf: I’ve been with the show all the four seasons, however, I came in toward the end of the first season. I think episode twenty. So right at the end kind of filling in for her old double [Ky Furneaux].

LD: What are your favorite types of stunts?

HS: I love to fight. My main background was fighting. This, sword fighting, was not something I grew up with, but definitely something I picked up on the way and trained a little bit. But fighting, which includes all the falling that we do—getting thrown around—I started at such a young age that I got thrown around a lot when I was in karate as a kid, moving into college years. But I really do love all the hard hits and driving. I’ve been doing stunts driving now for about eight years. So yeah, anything where I’m maybe flying through some glass or getting thrown out of a car, I totally dig it! Any of that.

LD: Have you ever had any major injuries?

HS: I’ve had a few. Biggest injury was not on Blindspot, actually it was right before I got on Blindspot. I was recovering from my biggest injury which was I was doing a high fall and there was faulty landing equipment, it was nobody’s fault, just a one in a billion chance I ended up injuring my neck pretty badly. I was out for about ten months from work, which was a really big bummer actually. And the doctor—I was in the ER from that injury and with you know, on morphine and valium and a neck brace and tears coming out of my eyes—the doctor’s like ‘Oh I guess this is gonna put a damper on your career’ and I’m like ‘Yeah, I really know what I’m going to do next time so I don’t hurt myself’ and he’s like ‘Next time?! Are you nuts?!’…I’m like ‘Well, yeah, I’m just bummed that it’s gonna be a while!’ So that was my most devastating injury. Everyone wanted to cut me open, everyone wanted to do surgery, they wanted to replace my disc, or fuse my spine and all this stuff…I kind of basically talked to doctors until I got the answer I wanted and then I found more doctors to support that.

LD: As a viewer, what are some of your favorite films or tv shows for stunts?

HS: Um…Blindspot? [laughs]…Oh, I really like Supergirl, is that WB? I do like Supergirl. I’m not gonna lie, I don’t watch a lot of TV because I work and I sleep and I try to watch Blindspot. But I do, actually, this new season of Iron Fist is probably my favorite bit of action on tv or Netflix…Blacklist, I love Blacklist. They just have such a variety of stunts on that show. And Game of Thrones. Come on, man, you can’t deny that setting like seventy five stunt people on fire is NOT cool. From a DRAGON. It’s insane.

LD: There’s a faction out there that is pushing for a Best Stunts category at the Academy Awards, how do you feel about that?

HS: I think that’s a good idea since like every other category is out there. I mean, I don’t know how you’d delegate that but I think that’s a good start to just recognizing it. I don’t do stunts, obviously, to be recognized. I love it because I get to kind of be the magician of the action world of film and tv. You don’t really want to give your tricks away, you want to make it an illusion…most, some people I know anyway, don’t do it for the glory. It’s not really about that. It’s about making good work. I would love to see it so it’s recognized as an art and as you know, that magical things that happens isn’t actually magic. It’s people that are putting their bodies and their lives on the line to bring everyone a cool product. CGI just doesn’t cut it for me, man!

*Check out our full chats with Blindspot stars Jaimie Alexander and Sullivan Stapleton!