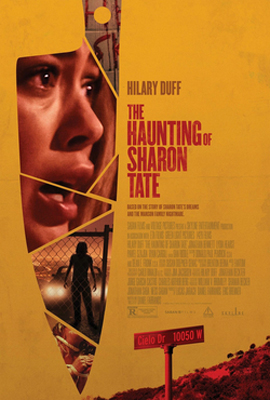 As a child of the 60’s, I grew up in a time full of tragedies.  Some of these events (among them, the assassinations of JFK and RFK) intrigued me to the point of learning everything I could about them.  Another were the murders of Sharon Tate and her friends at her home in August 1969.  Which really made me want to see the new film, “The Haunting of Sharon Tate.”

In 1969, Sharon Tate was on her way to becoming a movie star.  With roles in films like “The Fearless Vampire Hunters,” where she was directed by her future husband, Roman Polanski, and “Valley of the Dolls” she proved to be a very beautiful woman whom the camera loved.  A year earlier, during an interview, Sharon Tate spoke of a premonition she had of her death, one that was very disturbing.

After a brief clip from the aforementioned interview, the film picks up in August 1969, when Sharon Tate (Duff) returns from London, where she is visiting her husband while he prepares for his next film.  8 ½ months pregnant, Sharon is happy to be home, surrounded by her best friend, Abigail Folger (Hearst), Folger’s boyfriend, Wojceich Frykowski (Pawei Szadja) and family friend (and Sharon’s former lover) hair stylist Jay Sebring (Bennett).  One day a knock on the door reveals a small, bearded man asking to speak to “Terry.”  Despite being told that Terry no longer lives there, the man drops off a package and leaves.  Sharon is told that the man and his friends has been coming by constantly, looking for the former owner of the home, record producer Terry Melcher.  That night, Sharon has a vision of a very violent encounter with the mystery man, one that continues to grow in violence and intensity.

I’m completely torn in how to review this film.

On the plus sign, I give much credit to writer/director Daniel Farrands, who has done an incredible amount of research and ensured that everything noted in the film, from the red mailbox at 10050 Cielo Drive to the name of Sharon’s dog (Dr. Sapesrstein) is faithful.  There were a few factual errors but, creative license being what it is, I’m not going to quibble.  The performances are also strong.  Though Hillary Duff looks nothing like Sharon Tate (while Ms. Duff is certainly attractive, I can honestly say that, at the end of the 1960s, Sharon Tate was one of the most beautiful women in the world), she gives a fine performance of a woman slowly descending into a nightmare she cannot prevent.  The supporting cast is also well cast and deliver good work.

On the negative side, the film is horribly violent.  A quick intro using actual news and crime scene footage opens the film, and the murder scene including Sharon Tate’s body is shown, though her body has been retracted from the image.  However, as Sharon’s vision continue to grow, so too does the violence.  In the real attacks, Ms. Folger was stabbed almost 30 times…Mr. Frykowski over 50…and you get to witness almost every one of them.  That and the fact that Ms. Tate was pregnant make the violence horrific to watch.  Eventually you become numb to the violence being inflicted, taking away from the horror of the situation.

So I’ll leave it up to you, the reader.  If you’re looking for an interesting take on a very familiar story, you might want to check this film out.  If you’re not a fan of multiple murders, repeatedly depicted, you may not.  Or, like me, you’re just waiting for Quentin Tarantino’s upcoming take on the story, “Once Upon a Time in Hollywood.” 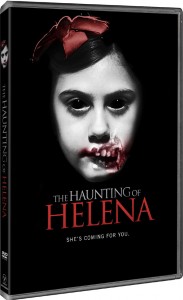 I have to admit when it comes to horror films, good cover art really goes a long way. “The Haunting of Helena” hooked up me from the moment I saw the box and I knew that it was going to be a creepy ass film. I must give props to Bloody Disgusting Selects who have been releasing some pretty awesome horror films in the last few years. The film packed a bunch of really terrifying scares and really kept you at the edge of your chair. It also delivered a very interesting story which also drove you in on top along with some great visual effects. Definitely recommend for a good scare.

Official Premise: After a divorce, Sophia moves to the south of Italy with her daughter, Helena. Their new home, an austere building of the fascist age, hides a mysterious closet and a buried secret. After the loss of Helena’s first baby tooth, a chilling obsession begins. She collects her classmates’ fallen teeth with an urgent hunger and begins to see strange apparitions. It soon becomes clear that there is far more to this apartment that can be seen. Sophia finds herself in a terrifying fight to save her child while maintaining her sanity.

“The Haunting of Helena” was only released on DVD, which is sad because this could have been much better on Blu-ray. The film’s score is quite eerie and well-positioned with the scares. It could have benefited from the HD surround track. In terms of special features, I was pretty impressed as well the extras includes. There is a great behind-the-scenes look into the production. I really enjoyed the special effects breakdown featurette, since they did a really amazing job with them. Lastly there are some cast and crew interviews rounding out the extras. 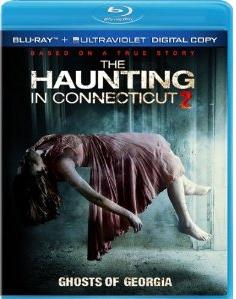 Let’s get this out of the way…what were they thinking with this title? I remember when I first say this film announced on Bloody-Disgusting and I just thought to myself “WTF, are they serious?” I understand that “The Haunting in Connecticut” was a very successful film but they could have easily have just called this “The Haunting in Georgia” and it would have gotten much more respect. It is based on a true story and in fact the film is quite awesome! Yes, I am serious.  The film is scary and has about tons of really great jump moments. I mean seriously, a man can’t handle that much! The story itself might not be the most well thought out of the year but it delivers the scares and for me that is the more important.  After watching as many shitty horror films as I do per year, this was easily one of the better and quite impressive.  I don’t look forward to going to bed tonight though. I will look forward to the third installment “The Haunting in New York” for sure!

Director Tom Elkins gets his first time in the director’s chair with this film and really proves his knows what he is doing.  He previously worked as an editor on films like “The New Daughter” and “Red Eye”, so he knows the genre quite well.  Since he also edited this film, he succeeds in piecing the good parts together well and effectively. I can’t wait to see what his next directorial effort will be.  Chad Michael Murray and Abigail Spencer both deliver strong performances or at much they can expect from a direct-to-video sequel. The star of the film for me is Emily Alyn Lind.  She is absolutely amazing and might I mention only 10 years old! You might know here best from her roles in films like “Won’t Back Down” and “J. Edgar, as Shirley Temple” and her TV role in ABC’s “Revenge” as Young Amanda Clarke.  She is going to be a huge actress for sure as she grows up, she keep an eye out!

Official Premise: Building on the terror of The Haunting in Connecticut, this horrifying tale traces a young family’s nightmarish descent into a centuries-old Southern hell. When Andy Wyrick (Chad Michael Murray, House of Wax) moves his wife Lisa (Abigail Spencer, TV’s “Mad Men”) and daughter Heidi to an historic home in Georgia, they quickly discover they are not the house’s only inhabitants. Joined by Lisa’s free-spirited sister, Joyce (Katee Sackhoff, TV’s “Battlestar Galactica”), the family soon comes face-to-face with a bone-chilling mystery born of a deranged desire a haunting secret rising from underground and threatening to bring down anyone in its path.

Lionsgate delivered a very impressive Blu-ray release for this film.  It also comes with an Ultraviolet streaming digital copy.  The 1080p transfer looks absolutely stunning within its 2.39:1 aspect ratio. The visual aspect of the film is a real home run and is well represented here. The DTS-HD Master Audio 5.1 audio track is also amazing.  Yes, some of the jumps are a little cliche but it is effective and very scary. The special features are a bit of a let down though.  There is an audio commentary track with Director Tom Elkins, Writer David Coogeshall and Co-Producer Brad Kessell, which is not bad.  “Seeing Ghosts: The True Story of the Wyricks” is a cool feature for all ghost lovers.  There are over 15 minutes of deleted scenes with optional commentary with Director Tom Elkins and also some outtakes. Lastly there is a trailer for the first film and the sequel.