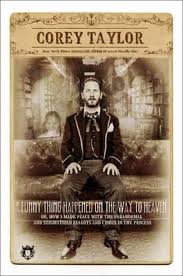 If the interesting title doesn’t grab you the stories contained within Corey Taylor’s new book “A Funny Thing Happened on the Way to Heaven” will certainly hold your attention. At several points throughout the reading of this book the hair on my arms was standing completely straight up. From the story of “Cold House” to the paranormal events that plagued Slipknot recording sessions there were definitely points where I should have put the book down but couldn’t. Though the more technical chapters contained in the book were at times lengthy and somewhat dry forging through that material proved fruitful as Mr. Taylor made sure to deliver with the following chapters.

Fans of Taylor’s previous works may be a little disappointed that “A Funny Thing Happened on the Way to Heaven” is not the second installment to “Seven Deadly Sins” as this new book at times skirts around some of the debauchery Taylor and his fellow band mates are known. However those looking for that type of material are for warned in the opening paragraphs that the book is not designed to be a tell all. Taylor clearly delved in to the depths of his haunted mind to bring some of this material to light and that alone will surely entice readers to pick up this book. 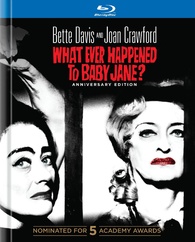 Bette Davis and Joan Crawford were known for there feuding both on and off the screen during making “What Ever Happened to Baby Jane?”. After 50th years, they still deliver some great performances in this film. Warner’s is releasing this film in their trademark Digibook release and it is definitely worth the upgrade for fans of this classic film. Warner Brothers delivers a real nice 1080p video, within its new digital transfer taken from the original camera negative and restored audio elements. This really makes the picture pop off the screen and looks amazing in black and white still after all these years. The original DTS-HD Master Audio Mono also works well with the 50 year old film.

The special features are great but nothing new for this 50th anniversary release. There is a commentary track from Charles Busch and John Epperson Epperson, which is relatively funny. “Bette and Joan: Blind Ambition” looks back on the legendary careers of both iconic actresses. “Behind the Scenes with Baby Jane” is short but neat vintage featurette on the production. The is an excerpt from “The Andy Williams Show” on 12/12/1962, when Bette was a guest on the show. “All About Bette” is a TCM special focusing on Davis and hosted and narrated by Jodie Foster. There is a “Film Profile” on Joan Crawford, which runs just under 30 minutes. Lastly there is a theatrical trailer.