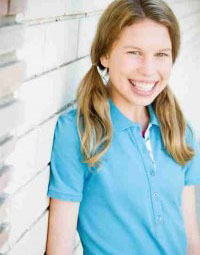 Hayley Holmes is known best for her role of Harper on “90210”.  This year she also recently appear in the film “Rubber” and the web series “The Guild”.  Media Mikes had a chance to chat with Halely about her roles and also what she has planned next.

Mike Gencarelli: Tell us about experience working on “The Guild”?
Hayley Holmes: My manager submitted my reel for the audition. I love “The Guild”, I have been watching it since season one. I am huge fan of Felicia Day. When I had the opportunity to audition for it I was very thrilled. I was lucky to book the role and I got to meet everyone on set and it was all very exciting.

MG: How was it working with such a fun cast?
HH: It was amazing working on it. They are such great comedians. A lot of them also do writing as well. Every time you are on set someone is cracking a joke or coming up with a funny one-liner. It was just a great group of people.

MG: How did you become involved with the film “Rubber”? and what did you think about the film?
HH: Before I even auditioned I read the script for that and I thought it was such an interesting idea for a movie. It is something that has totally never been done. It was completed different from anything I have ever done. I was a fan of the director Quentin Dupieux and have seen his other work. I thought if anyone could do it Quentin could. When I was able to come on it was great. We filmed in Palmdale in the desert. We were almost living the circumstance that were in the film.

MG: You appeared on the show “90210”, how was working on that show? Any plans for this season?
HH: They just started filming season four but there are definitely plenty of options for my character Harper to come back. She likes to stir the pot with the other characters. It was so much fun and I love playing her. She is such a type-a nerdy person and I am so not that girl, so it was very fun to get on everyone nerves and push the envelope. Everyone on the set was so cool, laid back and fun. It was nice to see that coming from such a hit show.

MG: From teen to tween, how was it working on Disney Channel show “Good Luck Charlie”?
HH: It was great and such a different dynamic. The vibe is just so friendly and everyone is hanging out and having fun. It is also cool because you get to film in front of a live audience. It is almost like theater.

MG: Tell us about your work as a contortionist?
HH: Oh yeah. My mom enrolled me into gymnastics when I was 3. I started liking it. I would do backbends and my teacher told me it was amazing. I started to build upon it and practice and working the flexibility in my back. My parents didn’t think it was a skill that anyone would ever utilize but I have use it so much in so many different projects so far. It has been really cool.

MG: What else do you have planned next?
HH: I also recently learned that this McDonald’s commercial I was in was up for an Emmy this year, so that is really exciting. I am currently out auditioning and trying to get a TV show to work on and along those lines.