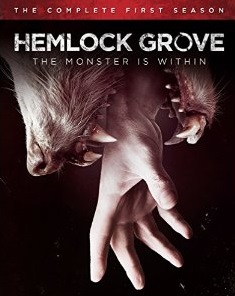 Before shows like “The Walking Dead” and “American Horror Story”, there was a real shortage of horror on television. “Hemlock Grove” was designed as a Netflix Original series, which premiered only on the paid streaming website. I stand behind anything horror and this show definitely paid off for being inovated and You got give it to Netflix since they have been releasing some brave and bold television series like “House of Cards” and “Orange is the New Black”. “Hemlock Grove” is executive produced by Eli Roth (Cabin Fever), based on the novel of the same name by Brian McGreevy. The show is edgy, witty, gory as hell and a ton of fun. I highly recommend checking this out for those who didn’t catch it on Netflix.

Official Premise: In a small Pennsylvania town, something evil has come in search of prey. But who is the true monster in Hemlock Grove? The brutal slaying of a teenage girl sends the townspeople of Hemlock Grove into a desperate search to find her killer. But this sleepy community soon finds itself living a nightmare as secrets and rumors threaten to drive them all down a dark path as they struggle to uncover the truth. Starring Famke Janssen (X-Men) Bill Skarsgård (Anna Karenina), Landon Liboiron (Altitude), Penelope Mitchell (The Vampire Diaries) and Dougray Scott (Mission: Impossible II).

Shout Factory is behind this Blu-ray release and they did a great job with the 1080p transfers. The show looks amazing, especially that amazing transformation scene. Speaking of that scene, this show definitely developed a certain rival of the original “An American Werewolf in London” scene. It is so well done, it should have won awards. I originally watched this show on the computer and my computer scene is not 1080p, so it was a nice upgrade. The DTS-HD Master Audio tracks work well with the show’s atmosphere and Nathan Barr’s score, which is epic and also at the same time creepy as well.

The special features are great like the series. There is a solid commentary track on the first episode with the director and executive producer Eli Roth with special guest Lorenza Izzo. I would have like to seen a few more but this one is still great. There are also six behind-the-scenes featurettes into the making of “Hemlock Grove” including “Dysfunctional In Every Way”; “Anatomy Of A Kill”; “Fairytales for Adults”; “The Rust Beneath The Surface”; “The Monster Within” and “It Hurts So Good”. All of these together add up a great inside look into the series. To be honest, I wasn’t expect much in terms of extras content here but I was very pleasantly surprised. 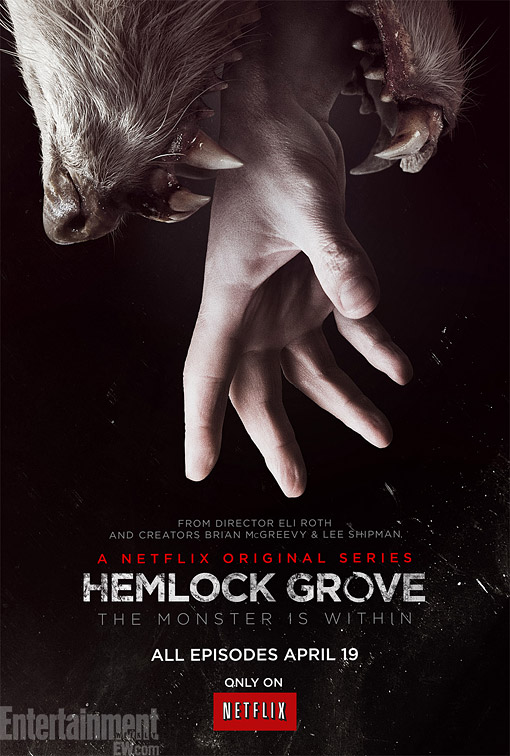 From Executive Producer Eli Roth
Developed by Brian McGreevy & Lee Shipman
Starring Famke Janssen, Dougray Scott, Bill Skarsgård, Landon Liboiron, Penelope Mitchell and Freya Tingley
Synopsis: From executive producer Eli Roth and based on Brian McGreevy’s novel of the same name, Hemlock Grove is a riveting one-hour murder mystery that revolves around the residents of a former Pennsylvania steel town. When 17-year-old Brooke Bluebell is brutally murdered, any of Hemlock’s peculiar inhabitants – or killer creatures – could be suspects. Through the investigation, the town’s seamier side is exposed, revealing nothing is what it seems. Beautiful, terrifying and graphic, Hemlock Grove is unlike anything else in its genre.
All 13 episodes of Season 1 will be available exclusively on Netflix
beginning April 19, 2013
Like us on Facebook:
http://www.facebook.com/hemlockgrove
Follow us on Twitter:
http://twitter.com/hemlockgrove
Read Complete Article
Filed Under: Film Headlines Tagged With: 19, 2013, april, grove, hemlock, netflix, ...
Page 1 of 1