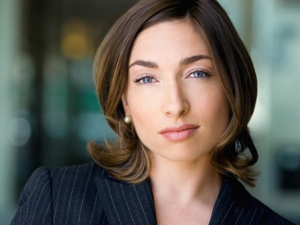 Mike Gencarelli: Tell us about your audition for the role of Pepper in “American Horror Story: Asylum”?
Naomi Grossman: They didn’t let on as to who or what the character was… I just knew she was petite, given that I was one of the few non-little people in the waiting room (and well, I’m only 5′). There were two parts to the audition. First was an improv. They gave us a ball, and asked us to persuade the casting director to play with us, like a child. Now, in retrospect, we know that was early Pepper. Then, we did one of Jessica Lange’s monologues from Season One. Which obviously showcased the later, evolved Pepper. But none of this made sense to us at the time. I mean, why read scenes that had already been shot, much less by the star herself? But now we know they just wanted to see if we had range.

MG: Take us through your transformation to become Pepper?
NG: I went in for a good seven or so preliminary makeup-meetings. First, before I was even cast, they took a bunch of pictures of me, which they manipulated to see how I would look as the character. That, and of course Schlitzie from the 1930’s, were their models. Then they made casts of my head and hands– I had to sit very still while they poured silicone over me, which hardened and would later be cut out to make my various prosthetic pieces. There was a specialist brought in to punch in the hair for the eyebrows and arms, and another to create the teeth. I met with an optometrist to fit me for contact lenses. Once all these pieces were in place, they put them together in an initial makeup test. At first, they covered my hair with a bald cap. It looked fine for my money, but these guys are consummate professionals. They (and the camera) see things we non-makeup folks can’t. So it was decided that they would shave my head– which made their job each morning much easier. Not that they had an easy job! Every day they applied the various prosthetic pieces one-by-one with adhesive, then painted them with an airbrush. Then I’d go to hair to get my pony curled, and to my trailer to get into wardrobe. But this was just my physical transformation– becoming Pepper as an actress was a whole other process.

MG: At what point did you find out what the role entailed in terms of the look?
NG: The day I was cast. I went in for my initial makeup meeting and they showed me the pictures of me that they’d manipulated. They told me I would look like this “Freaks” character named Schlitzie, who from that point forward, I watched non-stop.

MG: What research, if any, did you do to get into character psyche?
NG: Obviously, watching “Freaks” was pivotal. I read a lot about microcephaly. I’d practice, emulating Schlitzie’s movements and expressions alone in my apartment. I worked with a coach, with whom I shaped a bit of a back story. Because even though Pepper didn’t say much at first, she needed to be a full character, with a past and dreams and needs like any other. And of course, I wanted to be sensitive since this is a real condition… I was deathly afraid of hate-mail. Especially given my comedy background where we’re encouraged to make fun. But this was obviously not the place.

MG: How was it working with the musical number in the episode “Name Game”?
NG: That was a blast. I was truly in my element. I remember the AD over a microphone saying, “Everyone can go bigger except Pepper.” There were a ton of us packed in that common room, dancing seemingly nonstop, while “The Name Game” played on a loop. We shot top to bottom, the entire song at a time. There was minimal blocking for the principles, and cameras on cranes swirling around. I remember worrying how (with my one working eyeball) I’d navigate through all those dancing extras, without bumping into a big, expensive, moving camera or worse yet, Jessica Lange. I danced up a sweat in that sweater and fat suit, so the makeup people were constantly running out to poke and fan me between takes. Needless to say, I was sore the next day– I hadn’t spent the day crouched over like that since Pepper went pee!

MG: Are you shocked with the fans reaction to your character?
NG: Of course. There’s just no way to anticipate these things. You don’t take a little co-star or guest-star part expecting to be tattooed on people’s limbs! Or made into street art, promoting you as President! I knew it was a cool character, but the cast was star-studded– who’s going to pay attention to me when there’s Chloe Sevigny and Marc Consuelos and Adam Levine? For all I knew I was just one of many pinheads. It wasn’t until my first day on set that I was able to look around and see that I was, in fact, the craziest one in the asylum.

MG: Looking back on the season, do you have a highlight?
NG: All of it. From the moment I was cast, to the season’s end– it was one big highlight. Having zero expectations. Then suddenly, becoming my own internet meme, and taking over Tumblr. Driving by the “Pepper for President” posters around town. Seeing my face tattooed on a fan’s leg and chiseled into pint glasses. Making front page of the “Huff Po,” and “Best of 2012” by Entertainment Weekly. Watching my IMDb star meter shoot from 93K to 3K, then 3K to 300, settling somewhere between Catherine Zeta Jones and J-Lo. Stepping onto the red carpet and feeling those cameras flash. Hearing a fan shout, “We love you, pinhead” from the audience at Paly Fest. Getting my very own chair. Being affiliated with such a high-profile show, nominated for 17 Emmys! Working so intimately with powerhouses like Jessica Lange and James Cromwell. Having such a fun, over-the-top character to play… then watching her evolve, basically getting two roles in one, as well as the chance to really use my acting chops. Singing and dancing and delivering babies and monologues. Never having to do my hair again. From the superficial to the profound, it was all a highlight.

MG: Since Ryan Murphy is good with returning actors, any word about season three?
NG: No word. But even at the height of the Peppermania, I never knew if or when I’d be back. We pinheads are used to being clueless!