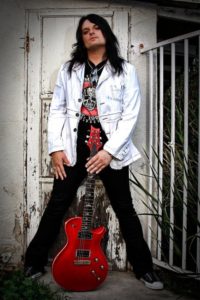 Alex Grossi is one of the busiest guitarists in today’s music scene. Some of his projects include the bands Beautiful Creatures, Hookers and Blow, Hotel Diablo and most notably Quiet Riot which he joined in 2003. Alex’s newest project Maps to the Hollywood Scars” recently released a new EP titled “Vol. 1” featuring former American Idol contest James Durbin. Media Mikes had the chance to speak with Alex recently about the new project and the recent addition of James to the Quiet Riot lineup.

Adam Lawton: Can you tell us about the new project Maps to the Hollywood Scars and, how you and James Durbin came together?

Alex Grossi: I had met James back in 2011 through a mutual business acquaintance when he was doing American Idol. We became friends during that time but lost touch for a few years. It wasn’t until James was doing a residency in Las Vegas recently that we reconnected and I started sending him demos. He was recording some great melodies and lyrics and the more we worked the better things kept getting. Eventually we have almost a dozen songs done. We decided to put out an EP to see how things would go and that led to us doing a second one and so on. Things happened very organically and we are very happy where things are at.

AL: What was the process like for working on the new EP titled “Vol.1”?

AG: I had been working on songs as they came to me for about a year prior. When I sent them to James he immediately got it and was inspired. There was really no set plan for anything but I had been demoing songs for about a year and finally found the right outlet for them. Having James come in has been great and also working with our producer AJ St James and Dizzy Reed who played piano and strings.

AL: How did Dizzy Reed become involved with the project?

AG: I have been playing in a cover band we do called Hookers and Blow for the past twelve or thirteen years. When we wrote the song “Death” I could just hear the string parts and piano parts. I sent him the song and asked him what he could add and what he sent back is what you hear on the record. He did a great job and nailed it.

AL: Are there any plans to tour behind this release?

AG: There have been some offers that have come in but with the both of us now being in Quiet Riot we have to work around that schedule and we would have to put a band together. Right now we are only going to do what makes sense for everyone as it’s hard to schedule something for spring and summer when we already have commitments with Quiet Riot. There has been talk of doing some late night television appearance but as far as a full blown tour we will probably only do a show here or there. It’s a side project and something that we want to keep special. We have plans but we just have to wait for the right time when everyone’s calendars line up.

AL: Can you give us an update on the recent Quiet Riot line-up change?

AG: We just announced James as our new singer and we are currently recording the new album with him titled “Road Rage”. We have bunch of new tour dates that just went up on the Quiet Riot website which will taking us all over the country and also to Canada. More shows keep getting added to it hard to keep up with them all. (Laughs) We are very grateful for the support which keeps us going.

AL: How instrumental were you in bringing James into the Quiet Riot fold?

AG: I was demoing the songs with James and during that time I was sending the tracks over to Frankie to check out. He has been very supportive of the project since I started it so when it came time make a singer change I offered to call James up and see if he would be interested. I called him up; he said he was interested and about two weeks later things were on their way. We did rehearsals and a photo shoot and that was it. It all happened very quickly. James is such a pro in that he came in prepared knowing all the songs and was ready to go. I am very blessed to play with such a great group of guys. We all get along great and I am really excited to get out there with this new lineup.

AL: What other projects are you currently working on?

AG: Back in 2002 I joined Beautiful Creatures replacing DJ Ashba. We recorded an album called “Deuce” which we just got the rights back to. We remixed and re-mastered that album along with adding a few new things. That is going to be released March 31st. We are calling it “Deuce Deluxe” it’s going to have a bunch of new stuff on it and it sounds really great. I also do a fun cover band with Dizzy Reed called Hookers and Blow which we will be doing some shows here and there. I also am working still with Steven Adler. Getting to see him play with Gn’R this summer was amazing.

For more info on all of Alex’s projects visit: www.alexgrossimusic.com