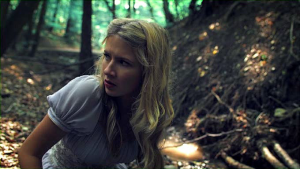 Mirror Mirror on the wall, what is the worst Snow White movie ever ? Wow, I love most if not all of Asylum’s films but this was just absolutely painful to get through. It turns the story of Snow White into a mix between “The Lord of the Rings and “The Chronicles of Narnia”. Running only 90 minutes, I thought this felt like a two hour movie. The special effects are decent for Asylum. Of course this isn’t “Avatar”.  The dragons were decent, but those damn dogs are just so terrible looking. I would avoid this bad apple like it was really poisoned.

This film takes the story of Snow White and turns it on its head. It turns the seven dwarfs into elves and gives them cheesy Spock ears. It follows Queen Gwendolyn (Jane March), who, of course, has to be the fairest of them all until the beautiful Snow White (Eliza Bennett) returns to town. The Queen recently seized power in the kingdom following the death, I mean murder, of Snow White’s father. After being attempted to be killed, Snow White hides in the Enchanted Forest with the elves and finds a way to defeat the evil Queen and win the Prince.

The Blu-ray itself is not bad though for a low-budget film. The video looks good in its 1080p transfer. The audio comes with an Dolby Digital 5.1 track and works decent with the film but gets overpowering with the score at points. The disc itself has a lot of menu issues though with choosing scene selection or playing the film. The special features are terrible like the film itself. There is a very short “Making of Featurette” featuring the cast and crew talking about the film. There is a short gag reel and additional Asylum trailer included as well.