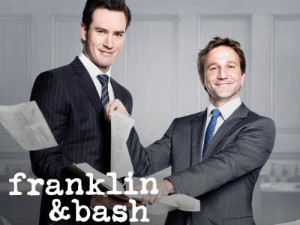 Breckin Meyer & Mark-Paul Gosselaar are the stars of TNT’s hit law drama “Franklin & Bash”. The show returns June 5th for its second second. Media Mikes had a chance to chat with the guys about working on the show and what we can expect from season two.

Mike Gencarelli: What should we expect from your characters in the second season?
Breckin Meyer: I think with the second season, when we jump off, we start with Franklin & Bash becoming equity partners in the firm which, for them, is a great thing because, I mean, it’s more money for toys. But on the bad side, it is a lot more responsibility and also a lot more repercussions for their actions. It’s no longer just the chance of them getting thrown in jail for contempt or getting fired. Now they got 500 employees behind them and they can really cause some damage, and also them representing – if they have to make rain. They have to sign corporate companies and these are guys that are used to fighting against. So how do you stay true to your values when you’re working for them instead of fighting them.

MG: Were you surprised at how well people received Franklin & Bash that first season?
Mark-Paul Goselaar: Oh, see, I have to go really quickly because Breckin took up so much time [laughs]. Yes, we were actually pretty surprised that we had such a big audience.
BM: I’m sorry, Mark-Paul, that’s all the time we have.
MPG: But, you know, I think Breckin and I are huge fans of our own show and so it was just a pleasurable surprise to find that people liked it as much as we did.

MG: So let’s talk about relationships, though. I mean, you guys got any love interests coming in the cards this season? Mark-Paul?
MPG: Yes, there are about two episodes worth of a relationship for Bash. One of the things that we try to do is not have anything come in between the two boys. So – because relationships don’t last all that long. They just sort of give you a glimpse of a different side of the two characters.  I think for me -I don’t know about how Breckin feels about it, but I like when the guys are together so it’s hard for us to bring in another relationship that isn’t Franklin or Bash. But we did do a bit of it over the course of the season. I had a girlfriend and Breckin’s character had a girlfriend as well.

MG: This show kind of stands out from other law shows out there.  Can you describe why you thought the show is so unique?
BM: I think from the get-go what Mark-Paul and I can both respond to is the fact that even though there is a case of a (weak atmosphere) that you have in normal procedurals, with this show, we go home with the characters. It really is – the cases are more of a backdrop. What the show’s really about is the relationship between the two lifelong friends and their kind of dysfunctional family of a law firm.

MG: Now I hear you didn’t really know each other that well before Franklin & Bash started. Have you developed a real-life friendship? And does that translate to having even more fun on screen do you think?
MPG: Well, I knew Breckin. I just wasn’t a fan of his work.
BM: Yes, that’s accurate.
MPG: Yes, that’s pretty accurate. But go ahead, Breckin.
BM: I was hoping that they would get literally anybody but Mark-Paul Goselaar. And then once they got him, it really was just – the money was green so what am I supposed to do, you know, at that point. But no, I think I can honestly it’s by far my favorite day job I’ve ever had. And I think it shows up on screen. The show lives or dies by whether or not you believe these guys are lifelong friends.
MPG: And by daytime job he means by post hole digging and drawing cars as his – car lot, so. This ranks right up there with one of his favorite jobs.
BM: It ranks right up there will pulling weeds.

MG: You guys have a really great list of guest stars for season two. Is there anyone that you are particularly excited about working with?
BM: I was really happy to have Seth Green come on because he’s a buddy and Mark Paul has been on Robot Chicken and we kind of thought he owed us. He has to return the favor. Who else? We have – Shawn Aston was a lot of fun. Rick Fox. Kevin Nealon was great. Chris Klein came on. We’ve had a lot of fun with our guys because, I mean, what you’re offering as actor is basically a week to come and play, you know, to come and have a really good time and our set is a fun set. It’s a fun time. It’s not super serious with no egos. And you get to come play for a week so we had Beau Bridges come back. Jane Seymour comes on as Peter’s mom so we meet Mama Bash.
MPG: I just echo what Breckin just said, but we had Sherry Appleby come on and play your girlfriend and Kat Foster came on and played my girlfriend and, boy, we just had a lot of fun, it just is a testament to our show and the word around sort of the industry is that it’s a great set to be a part of and come have fun and enjoy yourself.

MG: Do you have a lot of room available for improv?
BM: They give us the script. We always make sure we get a take completely on book. And then once we’ve got it definitely in the can, we kind of take our leash off and they say we can – we riff a little bit just as kind of the (buttons), the ins and outs of scenes, we may riff a little bit and it’s more for us. It’s more just to help us kind of solidify these guy’s friendships in our mind, that these guys are real friends who riff and goof off. So luckily enough we all kind of get these characters enough. Sometimes some of that stuff ends up in the show. But I mean, it’s fun to be able to riff like that. It just keeps us alive while we’re having long days.

MG: Well, besides your private parts, it is different for a legal drama to see their private lives? I mean you guys are party animals.
BM: Yes, I like that we go home with the guys. I mean, I like that we follow their relationship. It’s not just about what happens behind the doors of the courtroom. It’s about what happened in these guy’s lives and how it leads over into the courtroom. But really, it’s about these characters.
MPG: But I also think that they’re less party animals and they really just enjoy the fruits of their labor. I don’t think that they’re the guys that like to sip out of red cups and, you know, and throw a party just to throw a party. They really enjoy having people around them and using their money and having a good time. But they’re not fraternal in that way, right. I don’t think it’s like they’re a party – I mean, we’ve always fought that. We’ve always said you can’t make these guys just party animals because that’s not fun for everyone. You’ve got to have an element – these guys have to have a level of maturity and I think there’s a fine balance to that I think that we’ve created on this show. And, again, with this year, giving them more responsibilities, making them equity partners and (Intel Daniels), having them take on harder cases with bigger clients. And representing people that in the past that they fought against will create for the audience as well as for the characters, the maturity of that that I think you need to have to make this show work. It can’t just all be fun and, you know, parties.
BM: It’s just that’s their approach. There’s more drama – and I think that’s why this season is better than last season, is because there’s more drama and the way that these guys deal with drama is by being more liked and being fun and that allows the audience to not even realize that they’re watching a legal drama in that sense.