“Goosebumps Dead of Night” is a family-friendly way for Goosebumps fans of all ages to engage with some of their favorite R.L. Stine stories and characters while getting spooked a bit. Slappy has escaped from the pages of Goosebumps and reunited his family of Monsters. It’s up to you to stop Slappy’s dastardly plan to unleash the Goosebumps monsters into our world. Hide from monsters summoned from classic Goosebumps tales while exploring and solving puzzles in an effort to trap Slappy back into his book. Can you survive Slappy’s wrath and defeat him?

Straight from the pages and screen of your favorite Goosebumps books and films is the latest installment in the Goosebumps franchise. “Goosebumps Dead of Night” is a first person RPG that transports the player directly into the world of R.L. Stine. Players are immersed in dark and eerie locations while being tasked with having to collect missing book pages while warding off creepy clowns, werewolves, angry garden gnomes and the one and only Slappy! Visually the game looks great and captures the spirit of the series quite well. The foreboding soundtrack adds to the games appeal and certainly helps with several jump moments. It was a lot of fun going from level to level and seeing which story characters you were going to encounter next as each task brings the player closer and to closer to a final showdown with Slappy high up within the Tesla tower.

If you are new to first person RPG’s then it may take a little while to get used to the controls and how to navigate around the different levels but, once you have that all down the game provides is a lot of fun. Parents of younger players may want to check the game out first as there are some parts which can be a little frightening. Fans of the books will obviously want to check this out on one of the four available platforms (Playstation, Xbox One, Steam, Nintendo Switch) as “Goosebumps Dead of Night” is a great continuation of the Goosebumps franchise and one that both parents and youth will enjoy playing time and time again. 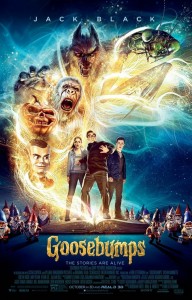 It’s difficult for me to talk about “Goosebumps” without talking about the popular book series that exploded in popularity in the 90’s, especially when I’m a product of the 90’s. Having owned over 20 books as a kid and reading through all of them, some of the multiple times, it’s safe to say I owe a lot of my current tastes in horror, sci-fi, and humor to those books. What R.L. Stine managed to do in that short lived series was spawn scares, laughs, morality, and even a hint of something sinister. He breathed creativity in the lives of thousands of children. While the movie is far from reinventing the “Goosebumps” wheel, it does respect its source material, and by doing so, spawns an entertaining funhouse flick.

Zach (Minnette) and his mom have just recently moved to Greendale, Maryland. Both of them are escaping the hustle and bustle of New York, as well as an unspoken tragedy. Zach’s assimilation into school is difficult since his mom is the new vice principal and he seems generally disinterested in his new surroundings. The only thing to catch his interest in a sea of hormones is the mysterious Hannah (Rush) and her equal mysterious father, played by Jack Black. Zach develops a crush on Hannah, and at the same time, suspects that something menacing is going on next door.

Those suspicions grow as he hears screams next door. It even gets to the point that Hannah’s father refuses to acknowledge Hannah’s existence to other people. So while Zach’s mom chaperones a dance, he breaks into Hannah’s home. Inside he finds a book case with “Goosebumps” manuscripts. In fact, every “Goosebumps” manuscript. The typescripts are mysteriously locked up though. Zach quickly finds out why, as well as the fact that Hannah’s father is none other than the author of “Goosebumps”, R.L. Stine.

“Goosebumps” plays like “Night at the Museum” with monsters. All of Stine’s creations come to life and literally leap off the pages once the books are opened. Creatures, beasts, and mischief-makers spring to life and instantly, wreak havoc on the quiet rustic town of Greendale. Just like “Night of the Museum” did with group of oddballs, “Goosebumps” finds charm, laughs, and relatable warmth with its characters. The only thing burdening the legitimately good story within “Goosebumps” is the hectic pace at which it’s told and a lot of loose ends that never get resolved or explained.

Usually Jack Black would be chewing scenery and being raucous, but he manages to split up his best traits into various characters. He delivers a steady performance as Stine, who’s coping with the fact that he needs to deal with some inner demons. The side of Black that we’ve seen in “School of Rock” and “Tenacious D” are considerably mild, but still active in the voice work he provides for Stine’s monsters, Slappy the Ventriloquist Dummy and Invisible Boy.

As a result of reading too many “Goosebumps” books and watching too many “Twilight Zone” episodes, I spotted all of the movie’s twists. A lot of that can also be attributed to my critical nature before stepping in the theater. That’s because I was ready for my childhood memories to be trashed on for a quick buck, but thankfully I was wrong. The mix of writers, who’ve worked on everything from “The People vs. Larry Flynt” to “American Horror Story” managed to find the sweet spot that cradles nostalgia and nurtures originality.

What “Goosebumps” does really well though, is create a story that manages to wink at “Goosebumps” fans, but also spin a story that’s understandable for someone who knows nothing about the book series. Kids, actual children and those young at heart, who are looking for a fun scary movie they can sink their teeth into, are in for a real Halloween treat with “Goosebumps” If the creators behind this movie were looking to dust off the books and reboot the series, they’ve succeeded.