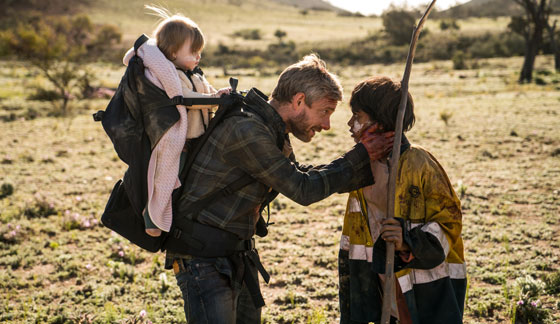 Martin Freeman was last seen on screen this year providing comic support to Wakandans in the blockbuster Marvel smash, Black Panther but this Friday on Netflix, he jumps to the forefront of a very different sci-fi landscape in Ben Howling and Yolanda Ramke’s Cargo. This fantastic zombie plague story sees Freeman playing Andy, the father of adorable baby Rosie, who is unfortunately bitten by zombies and is racing against the clock to carry Rosie to safety across the Australian outback.

Cargo made its stateside premiere last month at the Tribeca Film Festival, after which I got to speak with Martin by phone about working in the horror genre, and of course what tech he’d like to lift from Shuri’s lab!

Lauren Damon: Before the Tribeca premiere had you seen the film?

Martin Freeman: I had, yeah. But only a long time ago on a laptop.

LD: I imagine it was more effective with other people around…

MF: [laughs] Yeah, it went down very well actually, yeah. It was very well received. It was late and people need not hang around for questions but they did. I think it seemed very positive, yeah.

LD: With the film going to Netflix next, are you excited? Are you a big Netflix user yourself?

MF: I am a frequent Netflix user, yes, very much so. I think when you make a film initially, you always envision it having a theatrical release. But maybe generations now don’t envision that. But my generation envisions a theatrical release and it’s getting that in Australia. The rest of [the world] is on Netfilx, that platform, and you think ‘ok, well fair enough.’ But then you actually think it’s more than fair enough because way more people are going to see it on Netflix eventually than would do in a theatrical setting. Just the accessibility of it, the ease with which you could see the amount of things you could see, yeah, I’m more than happy about it.

LD: With Cargo filming mainly being outdoors and with your character carrying the baby everywhere, what was the hardest part about shooting?

MF: Probably just getting eaten alive by mosquitoes. That was pretty challenging. Holding babies on my back was kind of alright. Sort of felt like free gym work, really.

LD: So you lost weight by shooting the film?

LD: I assume there were multiple babies to rotate through?

MF: Yeah, two sets of twins. One pair of twins turned out, quite quickly, to be the more amenable pair. And the other pair was used more for in sort of wide shots.

LD: When you’re acting in an apocalyptic film or a zombie film, do you start thinking about the choices your character is making and whether you’d agree with Andy?

MF: Yeah, I think he did everything he could really. Part of what makes it relatable for me is that his actions seem very human.

LD: Do you think about if a zombie plague broke out what you—as Martin—would do?

MF: I haven’t thought about that a lot, no. No, not a lot. I don’t really fear zombies…but when the shit really hits the fan, whatever form that’s gonna come in…No, I guess like everybody else I’d panic [laughs]. Most people just hole up…

LD: Meanwhile, you’ve also just appeared in Andy Nyman’s Ghost Stories. If you don’t fear zombies, what about ghosts and the supernatural?

MF: Not really. I mean I kind of…I’m open to belief in the supernatural if it can’t be empirically disproved or proved. But no, I haven’t ever seen a ghost. I’ve had, you know, the occasional spooky night. Once you hear something that goes bump or bang and you start making up your own narrative for it. And I’ve been rooted to the spot a few times on my stairs thinking ‘is that a ghost or is it a burglar?’ And fortunately it was neither.

LD: Do you have any favorite horror films or ghost stories?

MF: I don’t know if they count it as horror…The first one I saw as a young child was Psycho. So that was when I was about seven and that was—it really affected me a lot. That first experienced of being very very frightened.

LD: In some sequences of Ghost Stories you get to play sinister, which I’m not used to seeing you in that way, was it fun to go there?

MF: Yeah, it’s a lot of fun. I loved it. It’s just always nice to lean into another part of your personality and be able to perform in a different way. Because I think as the film goes on and what I’m doing goes on, it was allowed to get a little more heightened and theatrical. You don’t always, in front of the camera, get the license to be that theatrical and that slightly camp. Your job in front of the camera is usually to be very real and not do any acting at all. Or at least that’s the job I give myself. But to do something a little bit more arch—you know, he becomes a function of the story then, as opposed to a three dimensional character. He becomes the function of the story to do something to Professor Goodman he has to have an effect on [him]. And I really enjoyed, yeah, just having to fuck with Andy Nyman. That was really good fun, yeah.

LD: Between Ghost Stories and Cargo, you undergo some pretty heavy makeup prosthetics, is that fun to get more into it? Or something more challenging?

MF: It is a bit of both, really. It is fun, because I’ve not done loads of it so it’s still—it doesn’t feel too much like the day job for me. It isn’t boring yet to do prosthetics. But yeah, the challenges are just the time it takes and the relative discomfort of it. Just there is a layer between you and the outside world that you’re not used to. There’s a layer between you and the other actors that you’re not used to. I guess with Cargo it was meant to be uncomfortable. And as I say, where we were filming at that time was quite hot…

LD: Yeah and then I imagine being under a bunch of zombie makeup in the hot sun…

LD: Between Cargo and Ghost Stories, which order did you shoot them in? Was it close together?

LD: So you were in like horror genre mode.

MF: Kind of yeah, it sort of worked out like that. And of course it, you know, as far as the actor’s concerned, that’s never The Plan. Because you very rarely have any plan at all other than, you know, be able to pay the rent. It’s just what comes to you that you respond to for whatever reason and I’ve got pretty poor taste in what I like—what I like as a viewer. And what I like doing as an artist….I guess there’s more genre around now than there was twenty years ago. There’s more genre around now. And I’m still from the old school of ‘hey it’s the story’. It has be as story that I like. That I would like to participate in totally regardless of genre. I never give a single second thought to genre.

LD: Speaking of being able to pay the rent—congratulations on being in Black Panther, only the highest US grossing movie ever right now, that’s pretty exciting!

LD: I am just a giant Marvel nerd, so I’m also wondering, if you could have any of the tech from Shuri’s lab in real life, what would you pick?

MF: Hmmm. Well…anything involving the black sand so it could move around and make shit. If you can picture it, if you can envision it, then the black sand would make it to be like that, that would be very helpful.

LD: What would you use it for?

MF: I’m not sure. Probably just furniture. I like the idea of that. Furniture and shoes.

LD: Just have a nice chair to sit on when you need it…

Cargo starts streaming on Netflix on Friday May 18th

Black Panther was just released on digital and blu-ray