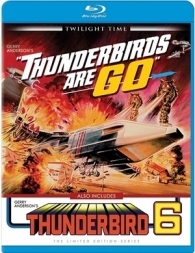 3…2…1…Thunderbirds are Go! I loved watching “Thunderbirds” on TV when I was a kid. I loved the used of puppets (aka Supermarionation) mixed with the sci-fi/action-adventure feel. This show was just so much fun. This is the first time that “Gerry Anderson’s Thunderbirds Are Go” and “Thunderbird 6” are being released on Blu-ray. This show never really fully crossed over into the US and these films were not a huge hit at the time but since then have developed as cult classics. This Blu-ray release is an Screen Archives Entertainment Exclusive and is a Limited Edition release with only 3000 copies produced. So if you are a hardcore “Thunderbirds” fan, I would recommend picking this up quickly before it goes out of print. I hope that one day the complete series will also be released stateside, fingers crossed.

Official Premise: Thunderbirds Are Go (1966) and Thunderbird 6 (1968) are the cinematic evolution of Gerry Anderson’s hugely popular British TV series, Thunderbirds (1965-66): a mix of puppetry (via the patented Supermarionation process, which allowed synchronization of dialogue with marionette movement), sci-fi futurism, action-adventure, and undeniably fabulous Sixties-era design. Both films weave tales of the adventures of the Tracy Family, a father and five sons who, with the assistance of the glamorous British agent Lady Penelope Creighton-Ward, run International Rescue, an elite team who roam the globe—and beyond—in a humanitarian effort to help their fellow men.

Inside the case, there is a booklet with an essay from Twilight Time employee Julie Kirgo. I would have loved to see them replicate MGM’s “International Rescue Edition” DVD box set from 2004, which included cut-outs of the Thunderbird vehicles and magnets. In terms of presentation “Thunderbirds Are Go” is better looking of the two films. It is more crisp and vibrant. “Thunderbird 6” is not bad either but there definitely is some grain seen throughout the print. Each films also comes with two audio tracks. The first is a new remix, DTS-HD Master Audio 5.1, which I feel sound great on both films. The other is the original DTS-HD Master Audio Mono track, which is a little less epic but still a great track.

The majority of special features are recycled are taken from the 2004 DVD box set. Let’s start with “Thunderbirds Are Go”. There is a great audio commentary with Producer Sylvia Anderson and Director David Lane. There are a few great featurettes, including “History and Appeal”, which looks into the background on “Thunderbirds” and Gerry Anderson. “The Factory of Dolls and Rockets” shows up how the puppets came to life. “Epics in Miniature” looks into the changes made to go from TV to film. “What Does F.A.B. Mean?” talks about the acronym phrase. “Come with Me to the Rushes” is a very brief word from Anderson about the production. There is a Photo Montage and an Original Theatrical Trailer included.

There rest of the extras for this film are new for this Blu-ray and equally impressive. There is another audio commentary track by Film Historians Jeff Bond and Nick Redman, who have great knowledge of the source. “Excitement Is Go: Making Thunderbirds” is a great retrospective documentary talking about the series and the iflms. “Cliff Richard & The Shadows Unseen Test Footage” is black and white recored for the dream sequence. Lastly there is an isolated score includes with an DTS-HD Master Audio 2.0 stereo track. This is a great track if you love the score like myself and it just sounds amazing, even more so that the during the film itself.

“Thunderbird 6” also includes an audio commentary with Producer Sylvia Anderson and Director David Lane. “Lady Penelope” talks about creating the character. “Building Better Puppets” looks into the puppets designs for the film. “Tiger Moth” looks into the stunt work and special effects. “A Call from Stanley Kubrick” features Sylvia Anderson talking about getting asked to do special effects for “2001”. “A Television Tribute”features Anderson off-screen talking about a Dudley Moore sketch that spoofed “Thunderbirds”. Lastly there is a Photo Montage and Original Theatrical Trailer. The only new Blu-ray extra for this film is an isolated score track also like “Thunderbirds Are Go” is presented with an DTS-HD Master Audio 2.0 stereo track.

Steve Guttenberg became well known during the 1980s, after a series of starring roles in major films, including “Cocoon”, “Three Men and a Baby”, “Police Academy”, and “Short Circuit”. Movie Mikes had a chance to ask Steve a few brief questions about his career.

Mike Gencarelli: How did a Long Island, NY native like yourself get into acting?
Steve Guttenberg: My Parent’s good friend is an actor, Michael Bell, and he invited me to come to L.A. for a two week visit. The casting bug bit, and I stayed for thirty years.

Mike Gencarelli: When you starred in the first “Police Academy” movie did you think it was going to be as successful as it was?
Steve Guttenberg: I really thought the script was incredible and lobbied to be in it. It was across between “An Officer and a Gentleman” and “Stripes”.

Mike Gencarelli: What is your favorite “Police Academy” movie?
Steve Guttenberg: I love them all the same. No Favorites.

MG: With Hollywood in a remake/reboot craze, any interest in ever catching up again with the “Police Academy” series?
SG: Warner Bros. is developing a new P.A. as we speak by David Diamond and David Weisman.

MG: How was it writing, producing, directing and starring in “P.S. Your Cat is Dead!”, was it hard to juggle all of those roles?
SG: I loved every second of it. It was thrilling.

MG: Do you plan on directing again anytime soon?
SG: I am developing some things and one might be a directing vehicle.

MG: You are involved in quite a bit of charity work, tell us about your of involvement?
SG: I am involved in “GuttenHouse” a home for foster children in L.A. Anywhere I can lend some support. I am also on the board of The Wellness Community in L.A.

MG: You recently starred in “A Novel Romance”, how was it returning to Long Island, NY for the shoot?
SG: Shooting at home was a luxury that I want to do again.

MG: According to the internet, rumors are buzzing about a “Three Men and a Bride” film, any truth to this?
SG: Disney is developing a new “Three Men”, Dimension is developing a “Short Circuit”, and Warner Bros is doing “Police Acadamy”. The audience wants to be reminded of good times.
“Three Men” with a great Mary like Dakota Fanning, or Miley Cyrus, or Blake Lively, is a sure hit.