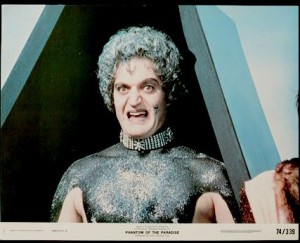 New York born, Gerrit Graham grew up in the Midwest and began his acting career at the age of eight in a stage production of “Winnie the Pooh.” He was the manager of the Columbia Players at Columbia University and it was while he attended school that he began his association with filmmaker Brian De Palma.

Among his best known roles are Beef in “Phantom of the Paradise” (recently released on Blu-ray), the overly superstitious Jeff in the classic comedy “Used Cars” and Franklin on the animated hit “The Critic.”

As he prepared for his recent appearance at this years Chiller Theater Expo Mr. Graham took some time out to answer some questions about his long and continuing career.

Mike Smith: You began your film career by appearing in three early Brian De Palma films. How did that relationship come about?
Gerrit Graham: I was a sophomore at Columbia University in NY, and was the head of the Columbia players, the college theatre company. One day I got a phone call from a guy who said that he had been the former head when he was there, and he was trying to make a film and he was hoping that the players could give him some help for rehearsal space, wardrobe, etc. He also mentioned that he was looking for two or three experienced actors, preferably in comedy. He had hoped to find someone in the Fine Arts Department. He gave me an address and said to send any interested actors to see him. I asked his name and he said “Mr. Brian De Palma”. Instead of sharing the address, I went down myself to see him. I spent the next three or four afternoons in the producer’s apartment, his name was Chuck Hirsch. I met with a variety of actors and eventually got the role, which was for the film “Greetings,” De Palma’s first feature film. It got a real release and ended up being a hit. A year later I got a call from Brian saying that he was making a sequel to “Greetings,” which was “Home Movies.” He offered me a role, which I of course accepted. We continued working together for many years because we trusted each other.

MS: How did you come to be cast as Beef in “Phantom of the Paradise?” My understanding is that you were originally slated to play Winslow?
GG: No, I was originally hired to play Swan. Then Paul Williams, who would become an Oscar winner and at the time was a very popular songwriter in LA had a agreed to play the Phantom in exchange for doing the music score. Paul then decided that he didn’t want to play the Phantom and instead wanted to play the villain. This meant that William Finley, a good friend of Brian De Palma’s, could play the Phantom, which was written by Brian for Finley. This meant I couldn’t play Swan anymore and Brian said he had another role; a character called “Capt. Beef”. I asked Brian what this character was like, and he said “a rock and roll star”. So that sounded like a lot of fun to me. A Sha-Na-Na type character was something that sounded like fun to me. It turned out that was not what he wanted. He flew me out from NY to meet with Paul Williams and the two of them kept making this Beef character seem more like Little Richard. “What do you want,” I said? They said “flamboyant”, which at the time in Hollywood meant “gay”. So I did a few lines in the Beef accent and lisp, and they loved it, burst into laughter and said, “that’s it!” That’s how the character was born.

MS: Are you as superstitious as Jeff, your character in “Used Cars?”
GG: No. I have a few superstitions that I do, like not walking under ladders, but that’s just common sense because you don’t want anything to fall on your head from the ladder.

MS: I’ve read that you actually did shoot the cars during the television commercial. Is that true? What kind of precautions did you have to take? (NOTE: In the film, Mr. Graham’s character films a car dealer commercial in which he takes a shotgun to the high prices posted on the windshields. The scene ends when he exclaims “Is this a 1974 Mercedes 450SL for $24,000? That’s too fucking high!” He then pushes a plunger and blows the car to pieces.)
GG: I did the shooting with blanks in the shot gun, then they brought in a stunt double who was a trained guns man. He did the scene shooting real shells at the car. I was standing there watching him, and all the other scenes were me.

MS: When’s the last time you were in a red car?
GG: I actually had a red car when I was about 22 years old. I had a red Saab Station Wagon. It was a good car! Since then I may have rented a red car or two, but nothing bad has ever happened.

MS: You’ve done both comedy and drama. Do you have a preference?
GG: No, not really. They are two different arrows in my quiver. Each are enjoyable in their own ways and have their own rewards. It just happens that I’ve done more comedy, but that wasn’t by choice. It just happened!

MS: Same question, film versus television. Preference?
GG: TV is just another arrow in my quiver as well. It depends on what kind of TV show it is. A half hour comedy or an hour long drama are a bit different. An hour long TV show is more like a film, because you shoot out of sequence. A half hour TV show is nice because you shoot in sequence from beginning to end. Other than the fact that they spend a lot more money making a film than a TV show, the work is pretty much the same. The end result is just a question of how good it turned out.

MS: You have a couple of Disney writing credits. How did that come about?
GG: I had a writing partner, and we just decided to try to write stuff to see if we could sell anything. I had made films with a producer named Phil DeGuere. He had done a number of shows, including the new “Twilight Zone” series. My partner and I pitched Phil stuff that we wrote, and we ended up writing three episodes of “The Twilight Zone.” At that point, my brother had joined as a third writer, and we continued to write. I honestly can’t remember how we got connected to Disney. We contributed extra material to “The Little Mermaid” and some other Disney films. We also wrote “Prince and the Pauper,” which was Mickey Mouse’s first feature in a great number of years.

MS: You’ve done a lot of animated voice work. Is that type of performing easier or harder than actually being on screen?
GG: It’s easier, because you don’t have to shave! There’s no make up, and you can do endless takes if necessary, without cutting, stopping, or changing scenery or wardrobe. My best known animated work is played Franklin on “The Critic.” That was a lot of fun! I got to work with a lot of really funny people and some microphones. We struggled with trying to keep each other from cracking up during recordings.

MS: What are you working on next?
GG: I’m working on finding work! Preferably, voice over work.