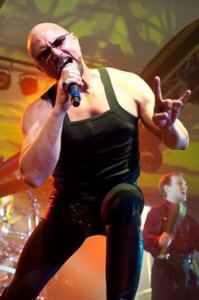 While standing outside of the Orlando House of Blues’ green room waiting to interview Geoff Tate of Queensrÿche, three musical things can be discerned: the sound check of the opening band, Geoff doing some pre-concert vocal warm-ups and – very faintly – the calming strains of classical music.   It’s an interesting mix of stimuli to be sure.  When Geoff completes his exercises, he’s ready to talk – which is amazing given that Queensrÿche’s sound check went for an hour more than scheduled and that the band has less than two hours before they have to take the stage and deliver the goods to a packed house.

Tate’s look has changed many times over the course of the 30 years he’s been with the band.  Gone is the coiffed long black hair that appeared in the videos for “Silent Lucidity” and “Jet City Woman” from the band’s hugely successful 1990 release, “Empire”.  These days, Geoff is sporting a bald head and a pencil-thin goatee that cause me to immediately conjure up mental images of Ming the Merciless and Anton LaVey.  But Tate’s demeanor is far from threatening and certainly not in any way demonic.  For a singer known for his ability to carry high-pitched metal wailings, his deep voice is one that is surprisingly soft-spoken.

The green room’s two plush couches upon which he and I sit are rather relaxing – as is the Debussy that continues to softly play from his iPod’s dock’s speakers, something that will remain a constant throughout our conversation.

Well…at least for half of it.

Dave Picton:  So you’re on your 30th anniversary tour.
Geoff Tate:  Yeah.  The end of it.  There’s the show tonight and then we have two shows on the boat and a show in Clearwater. Today is kind of a hectic day because we’re getting ready to go on a ShipRocked Cruise.  Certain equipment goes and certain things stay, you know?  We’re playing “Mindcrime” on the boat, so we’re rehearsing it now because we haven’t played the whole thing in quite a few years.

DP: The band has largely been the same group of guys that you’ve been working with since 1981.
GT:  Yeah.  Four out of five.

DP:  After a bunch of concept albums that you released within the past decade or so, such as “Operation: Mindcrime II” and “American Soldier”,  the latest new album, “Dedicated to Chaos”, finds the band going for straight-forward singles-oriented songs that often have new technology as a central theme.  What’s your take on technology?
GT:  Oh, it’s fascinating.  Very fun.  It can definitely be something that sidetracks you from a lot of things and definitely takes your attention away from a lot of other things while you’re figuring out the latest gadget.  A lot of really good things like studio stuff and recording equipment and all that has gotten really modular and now you can take it anywhere you want and record in rooms like this and airplanes.  We do a lot of work all on computers now   It’s great.  You can really sketch out an idea.  It helps in the studio in terms of composing and coming up with new stuff and making demos.

DP:  When you record demos now, how far are you going with the song?  I know that it used to be that it would be fairly crude like when Buck Dharma of Blue Öyster Cult recorded the “Don’t Fear the Reaper” demo, he was playing drums on cardboard boxes. Now you can have a demo be pretty close to what the final cut is going to sound like.
GT:  Well, sound-wise, you can get really close.  But working with the other guys in the studio is a whole different thing.  Personally, in my opinion, songs turn out better when everybody’s playing together.  There’s a kind of synergy that happens with the musicians and you take an idea a lot further along when you get other people involved.  You can take it on your own and get good sounds but you don’t get the really cool performances and the particular thing that they do.

DP:  “Operation: Mindcrime” has very much become heavy metal’s “Dark Side of the Moon” in terms of how timeless it truly is.  As of late, it’s also become very timely with events that are going on right now.  For example, there are a bunch of videos on YouTube of “Mindcrime” songs that feature photo montages of Occupy Wall Street.  What’s your take on the relevance of those lyrics to this cause?
GT:  Well, the movement is really interesting. Over the last couple of months, every city we’ve gone to, there have been protestors everywhere.  Thousands of them, not just a handful, you know?  The news likes to say that there are a lot of angry people out there – and rightly so.  It’s getting pretty tough to make a living these days in this country.  It’s a massive complex issue and there’s no simple answer to it. But it’s kind of what’s happened because our country is built on business and commerce.  That’s our culture, really.  And those things mean competition which wastes the other guy to get ahead.  If somebody can make more money selling jobs to overseas workers, they’re gonna do it if there’s no law that says they can’t. So that’s what’s happened.  We’ve sold all of our jobs and our manufacturing to other places and what have we got now?  We have a nation full of people that are trained for the service industry which is great but now that people aren’t spending money to go out and eat dinner what are you gonna do then?  Every action has a reaction to it. People think it’s fine to download music.  Well, downloading music has gutted an industry.  Where 10 years ago there were 50,000 or 100,000 people employed by the record industry, now there’s 3,000.  The industry is failing and the money is gone because somebody thought it was OK to steal the product.  You can’t fight that now that we’ve raised a generation of people who don’t see anything wrong with it.  In fact, I think they just passed a law that says file sharing is legal now.  Great.  Thanks.  Now you can steal my work.  Where does that end? It all affects everyone else, you know? So all of those people that are out of work in the industry now don’t have a job where they can go and pay to get their car fixed, so the mechanic is short on work now.  And because he’s short on work, he can’t buy the groceries he normally would buy at the grocery store so now the grocery store is hurting.  It all affects everything.

DP:  A domino effect happens.
GT:  Exactly.  It’s a massive massive problem that nobody has an answer for.  It’s something we really have to look at and study and maybe change the way we think and the way we do things.

DP:  I think fundamentally that’s one of the core things on which the movement is based.
GT:  Yeah. I think that’s probably at the core of what a lot of the protestors are talking about – at least the ones I’ve talked to.  There’s a lot of people who don’t know what they’re protesting against so they don’t know how to define it or verbalize it but there’s a LOT of people that do.  It’s an interesting movement.  There’s a lot of anger and frustration that it’s based around and when people get angry and frustrated, violence happens.  So we could be on the brink of something pretty major here over the next few months I would guess.

DP:  Anyways, back to some music questions.  If I snagged your iPod and I hit random, what would I hear?
GT:  Well let’s look. [reaches over to turn off  his iPod and remove it from its stereo speaker dock]  We were just listening to Debussy.  Artists or albums?

DP:  Let’s go with artists.
GT:  I’ll start at the top. [calls up his artist playlist]

DP:  Wow. All over the map.  America. Aerosmith. Beck. Benny Goodman. Black Sabbath. Brian Setzer. Frank Sinatra. Candy Dulfer.  Awesome saxophone player!  There’s actually quite a lot of saxophone on the new Queensrÿche album.
GT: Actually, there’s been saxophone on every album since..uh… “Promised Land” I believe.  Anyway, as you can see, there’s a lot of variance here on my iPod. [laughs]  Do you know of Erykah Badu?

DP:  I do.  I love her song “Next Lifetime”.
GT: She’s one of my favorites.  And we’re just halfway through the list! I’ve got a lot of stuff.

DP:  You’re not kidding! John Lennon & Yoko Ono Plastic Ono Band. Miles Davis.  Diana Krall. I’ve noticed there’s quite a lot of jazz.
GT:  There’s a lot of jazz on it.  A majority of the stuff on here is old jazz.

DP:  But certainly not exclusively.  Neil Young.  Moody Blues.  Loreena McKennit.  I’ve seen her live.  Absolutely amazing show.  Pink Floyd.  Sade.  Yes.  I just interviewed Jon Anderson and Rick Wakeman a month or so ago. Man…the list goes on and on.  And – but of course – Queensrÿche.  In the near future, what might I see on your Pod in terms of those guys?
GT:  [laughs]  I don’t  know.  We don’t really have a plan right now.  Honestly, this has been a really long tour and everybody’s just kind of burnt out right now.  It’s probably just time to get home and chill and recharge the batteries.  And then we’ll start talking in a couple of months about “Oh, do you wanna do something?” and we’ll see what happens.