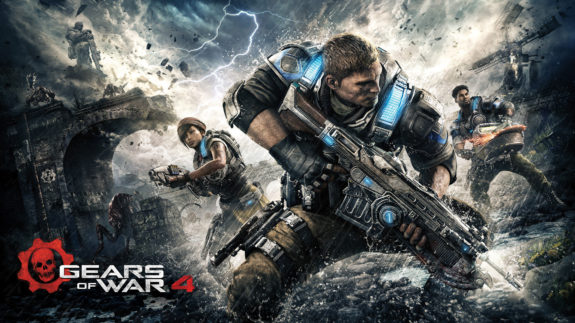 “Gears of War” is one of my favorite games in the last decade. When it was first released back in 2006 it ended up being the fastest-selling video game of 2006, in addition it was also the second-most played game over Xbox Live during 2007. Since then there has been an extremely respected and successful franchise built around that first game. The first sequel, Gears of War 2″, was released in 2008, following back “Gears of War 3” in 2011. The last game “Gears of War: Judgment”, which serves as a prequel to the franchise and is also received mixed reviews.

So 10 years have past and we are now looking at the release of “Gears of War 4” and word on the street is that it is aimed to be one of the biggest games of the year! The beta was released back in April and since then the developer has been working hard to fine tune all the fans feedback and requests getting the final version ready for release. This new game also brings back many features from previous games like the return of the dropshot weapon and the Buzzkill that shoots ricocheting sawblades.

“Gears of War” 4 also marks the first game in the franchise that is not developed by Epic Games, instead by the relatively unknown company The Coalition. But the game is in good hands because the new developer also scored big time remastering the first “Gears of War” in the 2015 release of “Gears of War: Ultimate Edition”.

They are also delivering no shortage in terms of options when purchasing this game including various Collector’s Editions with limited edition statues and also if you are looking to upgrade to the Xbox One S, there is a sweet bundle pack planned which includes a 2TB Gears of War 4 Limited Edition Xbox One S. This bundle will include “Gears of War 4: Ultimate Edition”, a custom Xbox One S console, and a Crimson Omen Limited Edition controller. So if you are a collector like myself you might want to snag this while it lasts!

Published by Microsoft Studios for Microsoft Windows and Xbox One, “Gears of War 4” is being pitched as a Xbox Play Anywhere title. If you don’t know what that means, get ready to be excited cause if you are planning on pre-ordering or buying the digital game you will be able to play on both Xbox One and Windows 10 PC. So you get the game for both platforms for the cost of one. Just note that this does not apply for physical disc copies only digital. So in between playing “Gears of Wars 4”  on the PC be sure to also visit betfaircasino.com for fun casino games online. I have a feeling that delivering games in this cross platform option will be very popular moving forward.

This franchise shows no signs of slowing down in the future. In addition to many books and comics that have been released off, there is also a feature film adaptation in development. So be sure not to miss “Gears of War 4”, now if you excuse me, I have to get my campaigning on!