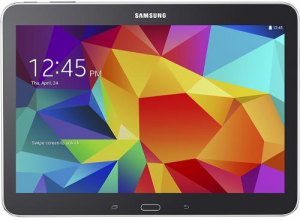 This holiday season, I received two Samsung products to review and feature in our holiday guide, the Samsung Gear 2 Neo Smartwatch and the Samsung Galaxy Tab 4 10.1 Tablet. These are both fantastic products and in my opinion MUST HAVE gifts for this holiday season. I will break each of them down with more details below. But since receiving them, I haven’t gone a day without using them and have quickly becoming my favorite pieces of technology outside of my smartphone, which is a Samsung Galaxy S5.

I have been researching Smartwatches for a while now and I have never really gotten on board with them as being a must have before. Once I had a chance to play with one hands on, I realized that I am unable to function without it. The Gear 2 Neo features apps, offline music playback, and heart-rate monitoring and much more. The downfall to some is that it only works only with Samsung phones and tablets but luckily enough I only use Samsung phones and tablets, so it couldn’t be more useful.

If you compare the Gear 2 Neo, which costs $199.99 to the Gear 2, which runs $299.99, it is not much different. The Gear 2 Neo has all the bells and whistles of the Gear 2 except the wrist camera, which is being fazed out of future models anyway and a metal wrist band. I personally do not need a camera on my wrist and the band of the Gear 2 Neo is absolutely perfect. In fact, I knew right out of the box that this Smartwatch was for me because I didn’t even have to adjust it either since it fit perfect instantly.

Other great features of the Gear 2 Neo are that it provide real-time notifications from your phone including Facebook and emails, as well as allowing you to receive and place calls when linked via Bluetooth to your phone. The device as an incredibly crisp 1.63″ Super AMOLED® display. It uses S Voice to allow you to speak directly to it in order to respond to texts, check email etc. All around, this is a fantastic device.

Next up is the Samsung Galaxy Tab 4 10.1 Tablet. Personally, I am tired of Apple’s iPads having a lock on the tablet market. Sure iPads are good but you can do so much more with a Samsung Tablet.  The 10.1″ screen comes with a beautifully sharp 1280 x 800 resolution. If you are a user of other Samsung products like myself, it will wireless integrate and sync with your contacts, music, apps and more. You can also download apps, games, movies, music and e-books from Google Play. The products cloud integration really provides a seamless crossover experience across all Android devices.

The Samsung Galaxy Tab 4 10.1 Tablet comes with 16GB internal storage plus microSD slot, which has expandable storage up to 64GB. With the extra storage you can stores your music, movies, photos and more on the microSD card (sold separately) to save space. This is somethign that you cannot do with the Apple products. The device also features a Quad-core processor and is very fast to boot and allows rapid multitasking and stunning graphics on the games. It also features dual camera, a 1.3MP front camera and 3.0MP rear camera, which works well with face chatting with your friends and family. An iPads camera is slightly better with 5.0MP but to be me doesn’t look much different.

This Tablet also comes with get Samsung gift including trial periods to Box.com and SiriuxXM. It is also very light weight and easy to carry around. I also like the option to use Kids Mode for my daughter, so she can enjoy it without having me looking over her shoulders. If you are looking for a change from the iPad world, this is an amazing device to get started it and get introduced to the Android system. Plus the 16GB model is priced very well at around $319.99, which is a steal when you compare to the similar iPad Air 2, which is $449.99. Go Samsung for sure this holiday season! 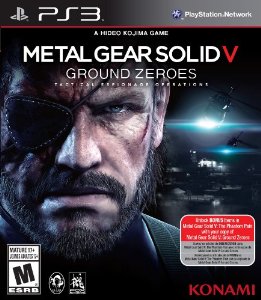 When I told a friend that I was playing the newest “Metal Gear Solid” game, he was like “How did I miss that?” Well if you are wondering the same don’t worry since “Metal Gear Solid V: Ground Heroes” is a prologue to the upcoming full game “Metal Gear Solid V: The Phantom Pain”, which is set to be released TBA 2015. This game is meant to get you excited and get your mouth watering. If you are looking to sit back and get immersed in the whole of “MGS” you might want to wait for the full game because this game is real short. I was able to fly through the campaign in nearly two hours. I would have to recommend this to those who are simply foaming at the mouth and can’t wait till next year to get some more Snake action.

I do have to give the same props for being very visual. In fact during the opening credits cut-scene, my wife walked in the room and said “What movie you watching, Mike?” and didn’t even realize that this was a game. To me that gives a real thumbs up to the game. Now, this was only on Playstation 3, so I cannot even imagine how good it would look on Playstation 4. Stealth is key in this game and definitely not for those who like to run in shoot and ask questions later, but obviously if you are familiar with the series this is no surprise. So whether you play on Normal or Hard, the challenge is very present, which should make hardcore fans happy.

Even though the main campaign is quite short. There is a still some decent replay value to enjoy if you take your time and poke around a bit. There are several side missions, which can be unlocked by finding XOF badges. I also felt that the general plot for this game was much darker than usual for this series, but that wasn’t entirely a bad thing. The game also features a strong voice cast including Kiefer Sutherland (“TV’s “24”) as Snake and Tara Strong (“My Little Pony: Friendship is Magic”) as Paz Ortega Andrade.

The timeline for the game is set in 1975, so it falls between “Peace Walker (1975)” and the original “Metal Gear (1995)” even though is obviously leads into “The Phantom Pain”, which is set in 1985 but I am basing it in terms of released games. This is also the first “Metal Gear Solid” game to explore the option of an open world giving players total freedom on how to play. So for $29.99, it all comes down to how hardcore of a fan are you for this series. Even though I went back and go to explore a little more after the main campaign, I finished this game just feeling a bit unsatisfied and wanting more.