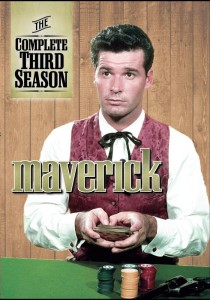 James Garner, whose rugged good looks and wry charm made him a star for almost seven decades, passed away last night at his Hollywood home. He was 86.

Born James Scott Bumgarner in Norman, Oklahoma, Garner began his acting career shortly after returning home from the Korean War. While serving our country he received two Purple Hearts for injuries he received in combat.

After a few minor roles in television and film he hit it big in 1957 playing Bret Maverick in the popular television program “Maverick.” So popular was the character that he would often appear briefly in other television westerns as Maverick. His first major film role came in 1963 when he co-starred in “The Great Escape.” The next year he became a leading man, appearing opposite Julie Andrews in Arthur Hiller’s “The Americanization of Emily.” With the exception of a brief 1972 series entitled “Nichols” he worked consistently in film for the next decade, appearing in such well received projects as “Grand Prix,” “Support Your Local Sheriff!,” “Marlowe” and “Support Your Local Gunfighter.”

In 1974 he took on the role he would always be associated with, private investigator Jim Rockford in “The Rockford Files.” Driving his Pontiac Firebird and living in his mobile home, Rockford, with the occasional help of his father, Rocky (Noah Beery, Jr.) and occasional guest stars, would take any case – for $200 a day, plus expenses! The show was so popular that it’s theme song, written by Mike Post, reached #10 on the popular music chart and even won a Grammy Award for best television theme. “TV Guide” later named it the 39th Greatest Television Show Ever!

After the show left the air in 1980 he returned to film, starring in Robert Altman’s “HealtH,” opposite Lauren Bacall in “The Fan,” re-teaming with Julie Andrews in the outstanding comedy “Victor/Victoria” and romancing Sally Field in “Murphy’s Romance,” a role that brought him his first and only Academy Award nomination for Best Actor.

The 90’s found him back on television, starring in the short-lived political series “Man of the People.” He also did several “Rockford Files” television movies and starred as Marshal Zane Cooper opposite Mel Gibson who took over the title role in the film adaptation of “Maverick.” The new millennium found him in space opposite Clint Eastwood, Tommy Lee Jones and Donald Sutherland in “Space Cowboys” and also starring in arguably one of the most beloved romances of the decade, “The Notebook.” On television he gave voice to the Creator in the underrated “God, the Devil and Bob” and on the popular series “8 Simple Rules.” His role on “Rules” was expanded during the last season following the tragic death of the show’s star, John Ritter. Besides his lone Oscar nomination, he earned fourteen Emmy nominations (winning two) and twelve Golden Globe nods (winning three).

If I have one image of James Garner in my head, it isn’t from any of his film or television work. A few years ago, while visiting a local business, I was drawn to a photo of a group of young men, a few of them holding basketballs. I remarked to the owner that “the guy in the middle looks just like James Garner.” It was. The owner had served with Garner in Korea and, whenever time allowed, the men would have scrimmage basketball games at their post. In the photo Garner is beaming, as if he couldn’t be any happier. What’s amazing is that he had a whole new career ahead of him that he wasn’t even aware of. He will be missed.