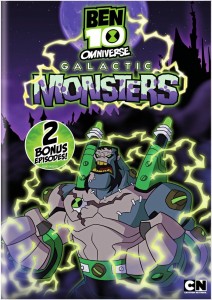 “Ben 10: Omniverse” is the fourth installment in the “Ben 10” franchise. “Galactic Monsters” is the setting for the shows fifth season, which just recently completed airing. I have never really watched much of this show in the past…an episode here and there maybe. But this is definitely a solid show with some great action and humor mixed. For those “Ben 10” fans, get ready cause besides the more volumes from this season coming up, this October also brings the new season “The Evil Rooters”.

Official Premise: Sometimes it takes a real monster to defeat a real monster. So Ben is transforming into some awesome monster heroes in the latest DVD release “Ben 10 Omniverse: Galactic Monsters.” Watch for almost 2 action packed hours as Ben transforms into heroes like Frankenstrike and Whampire as he battles the most vile villains in the galaxy including the evil Lord Transyl on Monster Planet. It’s spooky! It’s kooky! It’s “Ben 10 Omniverse: Galactic Monsters”.

This volume five DVD comes with the following “Galactic Monsters” Episodes: “Rad Monster Party”; “Charmed, I’m Sure” and “The Vampire Strikes Back”. There are also two bonus episodes including “Something Zombozo This Way Comes” and “Mystery, Incorporeal” from the fifth season as well. I do not know why Cartoon Network  didn’t just included the remaining three episodes to make this a complete season. This is a little bit of a letdown for sure. But don’t worry parents since I doubt that kids will even notice, this is more a concern for the show’s older audience. 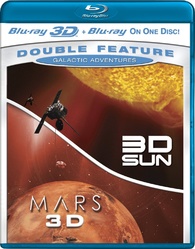 When it comes to space, I am sucker for anything…especially in 3D. This “Galactic Adventures Double Feature” included both “3D Sun” and “Mars 3D” but I wasn’t really blown away with either one. I was recently spoiled rotten with the brilliant film “Gravity” and coming back to these films, I just wasn’t “wowed”. Still though being able to view the sun up close…and in 3D is still pretty damn cool. The narration track by Al Roker is decent but I am not a huge fan of him either…I guess Morgan Freeman was busy. “Mars 3D” is neat only because it was the first that that NASA’s actual 3D footage was adapted for public viewing so that is kind of cool getting to see this but I would call both of these one-timers. I wouldn’t watch this again for sure and both also only run less than 45 minutes together, so for the price it just doesn’t sell me.

“3D Sun” Official Premise: From Earth, the Sun cannot be looked at with human eyes. Narrated by Al Roker, 3D SUN gives audiences a chance to see the Sun up close in startling 3D. Stand above the arctic circle and witness the most brilliant auroras on Earth; take a ride on a solar blast from Sun’s surface to Earth’s Magnetosphere, and come to a deeper understanding of what this vast sea of fire means to life here on Earth. In October 2006, NASA launched twin spacecraft from a single rocket in Florida — a spacecraft that would, for the first time in the history of space exploration, capture space-born, high-definition 3D images of the Sun. In 3D SUN, the leading NASA scientists from the mission unveil these images and take us behind the scenes to tell the story of the Sun and why it is of crucial importance to all of us.

“Mars 3D” Official Premise: Mars 3D takes viewers behind the scenes of the Mars Exploration Rover Mission revealing daily dramas, mind-boggling physics and compelling science behind the $820 million dollar NASA project. Behold this celebration of space exploration and the human stories behind the mission, how engineers plunged the depths of gravity and physics to ensure a successful launch an landing and how two 380 pound rovers will bring scientists closer than ever before to solving the mysteries of Mars.

“3D Sun” looks the best of the two with its 1080p transfer framed in 1.78:1 aspect ratio. The 3D looks pretty good and has some impressive depth. Now if we go to “Mars 3D”, this one was a real disappointment since it is only presented in a very sad 720p transfer in 1.78:1 aspect ratio. Sorry but that is not Blu-ray quality at all, especially not 3D Blu-ray quality. Either way I feel like “Mars 3D” acts more like a bonus feature to this release as “3D Sun” carries most of the weight. Each film does have a solid DTS-HD Master Audio 5.1 track. There are no additional special features included besides the two films.