Any fans of “Fraggle Rock” out there…I know there are! Well, this might be something for you(r kids) if you are looking for a return to Fraggle Rock. It has been more than 30 years since “Fraggle Rock” premiered and now we get a brand new spin-off called “Jim Henson’s Doozers”, which just premiered Hulu Plus with the first few episodes, which run 11-minutes long.

They show is aimed for preschoolers, which is perfect for me because I have a 2 year old and cause use her an excuse to watch. There are 52 episodes planned for this series already, which is a big commitment especially since this new series is Hulu’s first original project for kids.

Trading puppets for computer animation, this Fraggle Rock” spin-off introduces us to the “Pod Squad”, which consits of four new 3-inch-tall kid Doozers: Spike, Molly Bolt, Flex and Daisy Wheel. Check out the clip below, grab your kids and log on to Hulu ASAP! 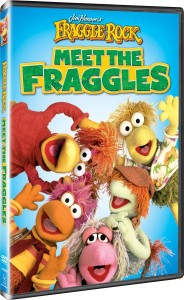 “Fraggle Rock” has always been one of my favorite shows growing up. It also had one of my favorite theme songs from the 80’s, I still have a vinyl record from the show. This release is a great show to celebrate the 30th anniversary of Jim Hensen’s classic children series. The series originally aired from 1983 to 1987 and still captures the hearts of its fans today. Watching this show again just makes me yearn for more shows like this again. I am looking forward to showing this show with my daughter as she grows up. Gaiam Vivendi Entertainment is also releasing “Fraggle Rock: The Complete Series Collection” on DVD. Hardcore fans should definitely check that out.

Official Premise: Dance your cares away with this collection of 6 episodes highlighting everyone’s favorite fun-loving furry creatures Fraggles! Get to know Gobo, Red, Boober, Wembly and Mokey as they explore outer space, dodge the Gorgs and learn about themselves and the world around them in this silly compilation.

“Fraggle Rock: Meet The Fraggles” includes the series pilot, as well as five excellent episodes introducing us to each of the series main characters. The episodes included are: “Beginnings”, “We Love You Wembley”, “Boober’s Dream”, “Red’s Club”, “Mokey and the Minstrels”, “Gobo’s Discovery”. These episodes good look a little aged. I do not feel that much work went into restoring these episodes for their 30th anniversary. They are still fun to watch and relive your childhood and for those that are not too familiar with this series, this is a great way to introduce “Fraggle Rock” to a new generation of fans. Besides the episodes, there are no special features included on this DVD.