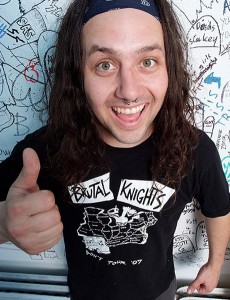 Tony Foresta is the lead singer for the thrash band Municipal Waste. The band just released their 5th studio album titled “The Fatal Feast: Waste in Space”. Media Mikes caught up with Tony prior to the bands show in Syracuse, NY to talk about the new album.

Adam Lawton: What can you tell us about the band’s latest album?
Tony Foresta: We basically took a year and a half off and just started writing. We spent quite a bit of time prepping and getting everything from the layout to the art work all in order. It’s probably the hardest we have every worked on a record. We wrote around 20 songs however only 17 made the album. We wanted to write as much as we could and then go in the studio and pick our favorites. I think everything worked out really well and we have gotten some real positive feedback so far. We worked our butts off on this album.

AL: What is the writing process generally like for the band?
TF: It varies. Sometimes Ryan and Phil will come up with riffs and we will just knock around different ideas. A lot really just depends on the type of song. We usually will practice between tours and during that time write a couple songs here and there. What seems to happen most often is when we start getting tired of playing the same songs out on tour we then decide to start working on some new stuff. You start to have a feeling when it’s time to do a new record.

AL: Did you approach things differently with the new album since changing labels?
TF: I don’t think we did on purpose but, there definitely was more fresh air. Things had started to get stale with our previous label so we wanted to branch out and do something different. It has been kind of like dating a new girlfriend. The band really needed that to help us be more creative and have fun.

AL: Are you guys going to be doing any video shoots for any of the songs off the new album?
TF:  We just shot two prior to leaving for this tour. We knew we were going to be out on the road for awhile so we figured we better bust some out. We shot one video for “Repossession” and one for “Fatal Feast”.  We worked with Josh Speed who did our “Sadistic Magician” video. That video has been one of our more popular ones so we decided to go with Josh again.

AL: What are the bands plans for the summer and fall?
TF: We are going to do a full US tour which will last about a month. We plan on bringing out some cool bands with us on that one. After that wraps up we will be going to Europe and then Australia. We definitely will not be staying home for any length of time.