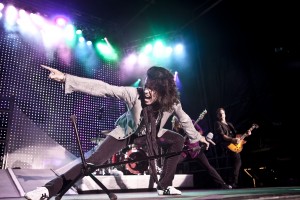 Kelly Hansen is best known as the current lead singer of the rock band Foreigner. He joined the band in 2005 after Lou Gramm left in 2003 to pursue a solo career. Foreigner just announced their 2014 tour, called The Soundtrack of Summer along with Styx and Don Felder of The Eagles. Media Mikes had a chance to chat with Kelly about tour, music and other future plans.

Mike Gencarelli: Tell us about what we can expect from your upcoming The Soundtrack of Summer tour?
Kelly Hansen: It is a tour of the U.S. and starts May 16th. Tickets are on sale now. It will consist of Foreigner, Styx and Don Felder (The Eagles). We are real excited about it. We all have been able to hang out recently and working on a re-recording of the track “Hotel California”. So that is pretty cool. We were also on “Fox and Friends” this past week in NYC, where we did a medley of “Juke Box Hero”, “Hotel California” and “Blue Collar Man”. We are rehearsing and getting ready and it has been great. I think it is going to be an awesome summer tour. It will certainly be a fun night of music with a lot of great hits.

MG: Foreigner and Styx have toured together before but tell us about the addition of former Eagles guitarist Don Felder?
KH: You are always trying to find a good package. It was a good time for us to try and all get together. Styx has been doing very well. Things are blowing up for Foreigner recently. We had had a lot of things come up and it has really given me the feeling that this is going to be a good year for us. I have a good feeling about this tour and that the vibe is going to be really good.

MG: Can you tell why you choose to record a new version of the Eagles’ “Hotel California”?
KH: I am not sure if it was a management idea or a band idea. I know that Tommy Shaw had written and played with Don on his latest record. So there was that partnership going on. We thought that it would be a good song for everyone to get on board with and be a part of and to redo for the show. Jeff and Don really came up with the arrangement, the plan and put it together. We all did different parts on it. I sing a verse…Tommy sings a verse…Don sings a verse. Tommy, Johnny and Don all play solos on it, so it is really cool.

MG: I read that Styx and Foreigner will interchange closing slots for the tour; tell us about this dynamic?
KH: Yeah, we call it flip-flopping. You come up with the cities for the tour and then you talk about which show would be good for each band to finish. Some fans want particular bands to close and that is cool. You just sort it and make sure it is pretty even. I like it because it makes it feel like a co-headlining gig.

MG: What can fans expect from the compilation album as well to go along with the tour?
KH: It is going to have songs from each band on there and maybe a couple of extras things. It will be available for sale during the tour. I am not sure of the complete details yet.

MG: Tell us about your appearance at a New Jersey Buffalo Wild Wings to get customers psyched for the Super Bowl halftime show this year?
KH: It was very last minute, we went in on our day off, and I had just gotten back from Germany. I went into the studio and re-sang the lyrics since the words changed for the spot. Then we flew into Secaucus, NJ and it was very on the fly. There were like twelve hidden cameras in the restaurant. It is a sports bar, so there were a lot of TV screens throughout. We had these cheerleaders come out with tons of confetti and we just started playing the tune. We totally surprised people and we did it a few times. We would wait for the restaurant to clear out and do it again. It was wild. Everyone had a great time.

MG: Lastly tell us about plans for a new Foreigner album and plans for yet another tour later this year to play the “4” album in its entirety?
KH: We were talking about doing that, yeah. We are also going to Germany to do an acoustic tour, which is something we have never done before. We will be playing all these cool opera houses in Germany. We were talking about doing the whole “4” album in its entirety, which will be cool. Concerning the album, there is already some writing that has started. I do not know if it will be a whole new album, it will mostly likely be a mix package with new material and hits. So we are looking forward to that as well.

MG: How do you get the energy to constantly tour non-stop?
KH: It is pretty heavy duty. I really have to try and take care of myself. I got a green juice sitting next to me right now. I have to make sure I get plenty of rest. The management and everybody is real good to make sure about asking me if I can do a particular schedule and they take real good care of me.

MG: I am a juicer myself, so I am sure the fans are going to want to know what your green juice recipe is?
KH: Mine is spinach, kale, cucumber, celery, ginger, lemon and apple. I like to do it heavy on the green, just a little bit of fruit. I do not like sweet juice. I like it to be pretty gnarly. I like that [laughs]. If you are juicing andf you have all that pulp left over, what you should do is put all that in a pot fill it up with water and you can make this great vegetable stock that you can use for all kinds of recipes. That way you can use the vegetables twice, especially if you are buying organic and they are more expensive. You juice the vegetable first and take that out and use that to make the stock. Then you go and put in your fruit, so you are not making a vegetable stock with fruit in it. I really enjoy that.